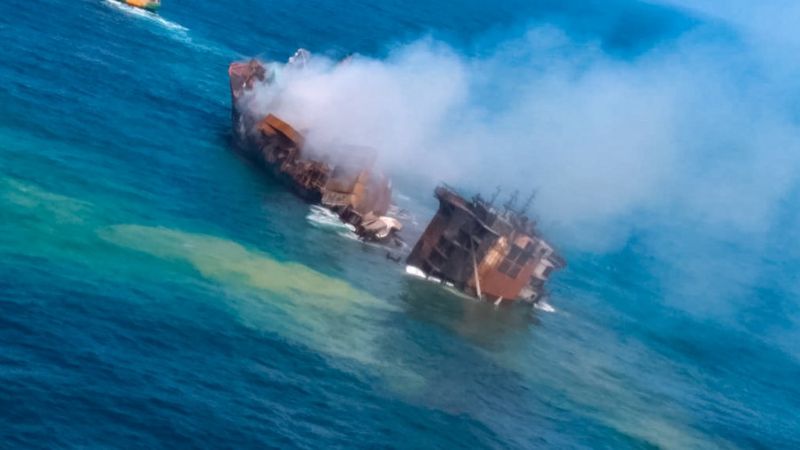 It would not be possible to tow away the wreck of MVX-Press Pearl until the end of the monsoon season, Environment Ministry Secretary, Dr. Anil Jasinghe said during a discussion under the theme, Looking beyond X-Press Pearl, at the Information Department yesterday in Colombo.

Dr. Jasinghe added that representatives of X-Press Feeders, the operators of the ill-fated ship, were monitoring the wreck through a caretaker company and 10 thematic groups were studying various aspects of the disaster.

“The sea is very rough and we can’t do anything now. We have to wait till things settle down a bit,” Dr. Jasinhe said. None of the officials were willing to reveal the estimated cost of the removal of the wreck.

The plastic pellets that were released with the sire n the ship were being detected on beaches in seven districts, Central Environmental Authority (CEA) Chairman S. Amarasinghe said. The entire coastal stretch from Matara to Mannar has been affected, he said.

“We are keeping the collected pellets for legal purposes and will destroy them later,” he said.

Commenting on the impact the disaster would have on tourism, Sri Jayawardanapura, Economics Department and Forestry and Environment Science, Professor Prasanthi Gunawardena said that losses would be incalculable.

Prof. Gunawardena added that the incident would have a significant impact on the fisheries industry and deprive many Sri Lankans of their main source of protein.

“Children need protein and most of our kids get their protein from fish. How do we calculate the impact this will on their health?

Marine Environment Protection Authority Chairperson, Darshani Lahandapura said that a grey sheen continued to emanate from the vessel, and discolouration of the sea in and around the wreck remains.

“This has been apparent since the vessel’s stern became submerged, and the remnants of the cargo in the 1486 containers that were onboard were exposed to seawater,” she said.

Climate change: If we don’t act now we will kill our planet, there is no planet B