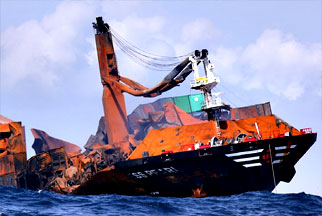 A high-profile investigation into the circumstances that led to MV X-Press Pearl carrying a leaking container loaded with nitric acid being allowed to reach Colombo has taken a new turn with the revelation its local agent Sea Consortium Lanka of Setmil Group suppressed information about the acid leak.

This was revealed before Colombo Additional Magistrate Shalani Perera on Monday (7) in the wake of submissions made by Deputy Solicitor General Madawa Tennakoon.

The Centre for Environmental Justice (CEJ), last week, moved the Supreme Court against the Sea Consortium Lanka as well as operators of the vessel, X-Press Feeders. Authorities are in a quandary over the unexpected revelation that may compel the government to take action against the local agent pending investigations.

DSG Tennakoon named the Presidential Award winner Sea Consortium Lanka as the vessel’s local agent. Following the questioning of the vessel’s Russian Captain Tyutkalo Vitaly, the inves tigators have established that specific information furnished by the vessel to the local agent pertaining to the leaking container had been withheld. Subsequently, the relevant e-mails had been deleted, the court has been told.

The Criminal Investigation Department (CID) also recorded the statements of the ship’s Chief Engineer Sadilenko Oleg, a Russian and Chief Officer Peter Anish, an Indian. Their passports have been impounded. They were among 25 member crew evacuated by Sri Lanka Shipping Company owned tug ‘Hercules’ on May 25 following an explosion aboard the vessel, while a fire had engulfed some containers stacked on its deck.

The Singapore-registered MV X-Press Pearl sank on June 2, 9.5 nautical miles North West of Colombo port, the day after President Gotabaya Rajapaksa directed that it be towed to deeper seas. Shipping sources told The Island that the vessel went down where it had been since May 19 after entering Sri Lankan waters.

Additional Magistrate Perera has directed the Sea Consortium to furnish the originals of the e-mails from mail servers located abroad.

Investigations have revealed that the agent knew of the imminent impending danger though chose not to share the information.

Sources said that the vessel’s owners X-Press Feeders, the largest feeder operator in the world, couldn’t have been unaware of the crisis even though they didn’t intervene.

Sri Lanka Ports Authority Chairman (SLPA) retired Gen. Daya Ratnayake told The Island that they hadn’t been aware that X-Press Pearl had been leaking nitric acid since May 11, nine days before the fire started in Sri Lankan waters.

International news agencies reported that ports in Qatar and India had declined to offload the leaking acid container onboard in Jebel Ali, Dubai.

Navy spokesman Captain Indika De Silva told The Island that the Navy on June 5 facilitated the recovery of the Voyage Data Recorder (VDR), also known as maritime ‘black box’ personnel of the Director General, Merchant Shipping. Navy and shipping sources said that it would help investigators review procedures and instructions in the run-up to the disaster.

Director General of Merchant Shipping Ajith Seneviratne yesterday (9) told The Island that the VDR had been handed over to the CID for further investigations. Asked whether his outfit authorised the entry of X-Press Pearl to Sri Lankan waters, Seneviratne explained their responsibility in terms of the relevant parliament Act was to issue licenses to shipping agents, annually. DG Seneviratne said that his office didn’t handle day today doings in respect of ship movements in and out of Sri Lankan harbours.

In terms of the Shipping Agents’ Act, Sea Consortium Lanka had received its license from DG, Shipping.

In the wake of Justice Minister Ali Sabry, PC, chairing a meeting attended by relevant officials, including Attorney General Sanjaya Rajaratnam at the former’s ministry, to discuss the issue at hand, The Island requested for an update. Minister Sabry explained that everything couldn’t be discussed publicly. However, the current focus is on taking tangible measures to make a proper claim for damages.

Minister Sabry said: “Our endeavor is to focus attention on specific areas to prepare for legal action on claims. In this regard, five sub committees were appointed to look at five specific areas relating to possible claims and asked to collate evidence, preserve those, assess damages past present and future with expert support and present it to the Attorney General for his response.

Legal team will do the research and support the Attorney General together with his work.

Identifying and appointing an international team is also being discussed where we have no expertise at the level expected to compete with a club of ship owners who process the claims for and on behalf of its members.”

Centre for Environmental Justice (CEJ) and three others, including its Executive Director Withanage Don Hemantha Ranjith Sisira Kumara, in a fundamental rights application filed in terms of Articles 17 and 126 of the Constitution, in respect of the X-Press Pearl affair, has named X-Press Feeders and its local agent Sea Consortium Lanka as 11th and 12th respondents. They were among 13 respondents, including the Attorney General.

The CEJ Executive Director, in response to The Island queries acknowledged that at the time the SC had been moved against what the petition called the worst marine ecological disaster caused by the sinking of X-Press Pearl, they weren’t aware of the local agent deleting e-mails received from the Captain of the ship.

Petitioners stated that the Captain and the crew members of the MV X-Press Pearl knew of the nitric acid leak from about 11th May 2021, nine days before the blaze started and had deliberately failed to inform the Sri Lankan authorities of such risk.