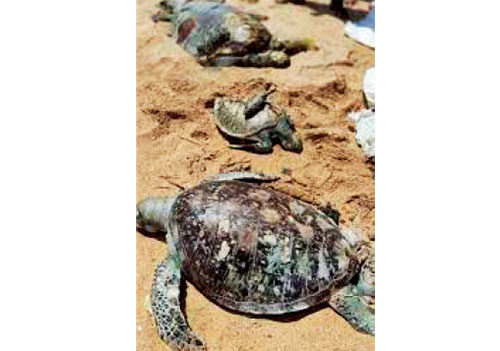 More than 70 turtles have died so far due to burning and chemical poisoning following the blaze aboard Singapore flagged merchant X-Press Pearl, experts confirmed.

However, they said further studies are continuing with the number of deaths of turtles due to the disaster expected to exceed 200.

The Department of Wildlife said they had received information of more than 70 turtles, many sea birds, eight dolphins and a juvenile Blue Whale found dead.

“We have never seen such a large number of sea reptiles perishing within weeks”, an official said, while adding that a mixture of dangerous compounds seeping into the ocean could have caused the deaths.

Marine Environment Protection Authority (MEPA) Chairman Darshani Lahandapura said there was no bunker oil spill so far from the stricken vessel which is laden with 300MT of oil.

She said three experts from the United Nations are here to assess the damage caused.

Speaking at a discussion on `Looking Beyond X-Press Pearl’ at the Information Department in Colombo, he said Sri Lanka should forward compensation claims by further studying similar incidents in Hong Kong and Norway.

He also said that the danger to the coral, sea beds and mangroves should also be studied at length.

The Environment Department’s Publicity Director, Hasini Sarathchandra said that there is a grave impact due to the pollution killing all five species of turtles found in Sri Lanka – Green Turtle, Olive Ridley Turtle and Leatherback Turtle, Loggerhead Turtle and Hawlesbill Turtle.

“This is the first time we are experiencing such deaths in large numbers. We fear it is will be far worse,” she added.

However, she said that a sub committee would decide on the compensation.

Samples of the dead animals were sent to the Government Analyst, University of Peradeniya Veterinary Faculty, National Aquatic and Resources Agency (NARA) and the Zoological Gardens in Dehiwela.

She said due to the earlier ship incident, only Olive Ridley Turtles were affected and 20 deaths reported.

The Environment Department believes that the number may be higher going by the species found dead within a short period.

All turtles and their products are fully protected under the Fauna and Flora Protection Ordinance. Anyone found guilty of committing an offense is liable to a jail term and a fine.

The cause of deaths of the marine creatures could be determined soon, said Government Analyst Gauri Ramana.

Investigations were also launched to determine the impact of the ship disaster on the seawater as well as its chemical composition.