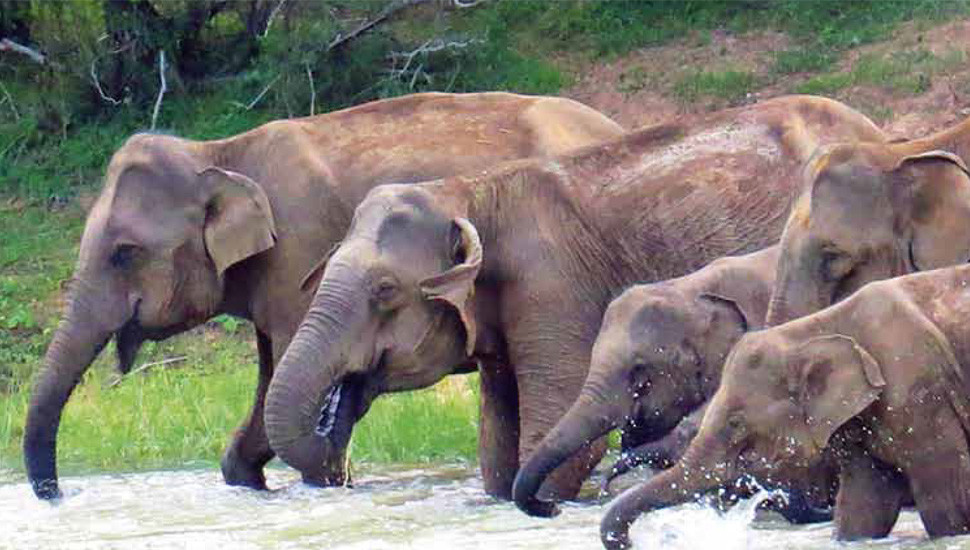 A young tusker lies dead at Block 3 of the Yala National Park. Lying on the ground in his own blood and dung, this gentle giant lost his life because he was born with a pair of tusks.

Allegedly shot and killed by a farmer in the area for his tusks this animal breathed his last with nobody to help him. Shot and killed in his own territory the animal was helpless at the hands of a brutal killer or killers whose only aim was to get their hands on the growing tusks and hair of the elephant.

The remains of the dead tusker with his head cut off paints a horrid picture and have shocked environmentalists at the sheer brutality some people will resort to, to get a pair of tusks.

The carcass of the tusker was found at Sella Kataragama Gothamigama electric fence with his tail and trunk cut off. While environmentalists are trying to figure out whether this is the elephant named Suranimala, Environmentalist/Wildlife Activist Nayanaka Ranwella says when going through photographs published it is evident that a bullet has gone through the tusker’s head. “It is clear that the tusker was shot from the front. I request the Department of Wildlife Conservation (DWC) to locate the bullet used to kill the tusker and produce it in Court.

The tusks were removed with the use of a chainsaw leading us to believe that this was a planned killing. These are heinous crimes,” Ranwella says. He adds that the head of another tusker was discovered from the buffer zone of the Yala National Park about a year ago and that animal’s tusks were also stolen. “This clearly shows that elephants are being killed for their tusks and a big racket is going on,” Ranwella explains.

A statement issued by the Wildlife and Nature Protection Society (WNPS) questions whether or not we are going to sit by and watch these heinous acts of cruelty towards animals and wildlife escalate day by day? “We have seen similar images of elephants being hacked at in Africa, but never in our wildest imagination did we think we would see the same happen here in Sri Lanka. Cruelty towards animals and wildlife killings are increasing day by day and yet, we do nothing is done about it. Clearly our laws are not working,” the WNPS statement says.

It says perpetrators continue to walk away after committing violent wildlife crimes daily. “It was Mahatma Gandhi that said, ‘The greatness of a nation and its moral progress can be judged by the way its animals are treated’. This poor elephant’s face has been hacked at to get at his milk teeth, not even tusks.

What protection are we offering these innocent creatures? None,” the statement reveals. It further says, “We call upon the Government to at least now take action against these wildlife crimes which are increasing in frequency, are not only illegal but are cruel and incredibly heinous.

We must strengthen the punishments under the Fauna and Flora Protection Ordinance (FFPO) and prioritise increasing the fines under the FFPO to reflect the severity and nature of these wildlife crimes, as it is very clear that the current fines are not serious enough to deter these crimes. We must act urgently and make it a priority of the nation to protect our wildlife from these evil forces,” the statement says.

“A suspect was arrested in connection with the killing of the tusker at Block 3 of the Yala National Park. The arrested suspect has been identified as the owner of the firearm allegedly used in the shooting,” Wildlife officials say. According to Reliable Sources the suspect has ironically said he shot the tusker in self-defence.

Environmentalists say the lives of three other wild elephants living in Yala Block 3 are also at risk following this recent incident. “The greatest degree of protection under the provisions of the FFPO is not enough to have legal protection if the enforcement mechanism is also not strengthened to take effective action.

In my opinion it is the lack of resources in the DWC which is the cause of many of these issues and not a problem of the law been weak. The DWC is severely understaffed and even that staff that the department has does not have the adequate resources such as vehicles firearms, and training to do their job effectively,” Environmental Lawyer Dr. Jagth Gunawardana opines. He says therefore, the department staff needs to be enhanced several fold.

“The department should have at least 6,000 personnel in the field. But the ideal situation should be 9,000 people in the field if they want to do an effective job. Until this problem is addressed we will be facing such tragedies in the future.

We have been telling this to the authorities for the past three decades and the DWC is earning revenue in billions of rupees each year through tourism, but the money is not put back at least partly to keep the resources alive for the sake of the industry at least, if the conservation is also not taken into consideration,” Dr. Gunawardana said.

He says the DWC should be strengthened to protect the resources that will attract tourists in the future and even if they look at it from a narrow perspective the DWC should be given more resources and the department strength should be enhanced in every respect. “They can enhance the technology capability of the DWC by having a drone to patrol the national park at night time, so that any miscreants who try to enter the park can be handled much more effectively.

This is one way to make use of modern technology and with minimum risk for more effective action. If there are two drones going round the park at night at regular intervals any person entering the park could be monitored and some park personnel can track to that spot,” Dr. Gunawardana explains. Director General of DWC Chandana Sooriyabandara says joint investigations regarding the tusker’s death are ongoing with the Police.