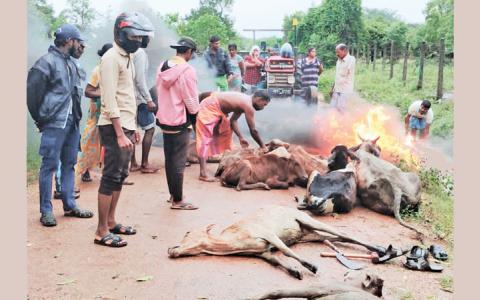 A group of Peradeniya University scientists travelled to the North and the East yesterday to ascertain whether climate change-induced temperature shifts and air pollution were the cause for 700 animal deaths last Thursday in the Kilinochchi, Mullaitivu, Jaffna, Batticaloa, and Trincomalee districts, the Sunday Observer reliably learns.

The Director General of the Department of Animal Production and Health, Dr. Hemali Kothalawala said that the department had launched an investigation following the deaths of 700 cattle and goats in these districts.

The authorities attributed the deaths of the animals to unprecedented cold weather in these parts, said Dr. Kothalawala.

She said this in response to the Sunday Observer’s inquiry on the possibility that these animals had died due to polluted air from India and neighbouring countries entering Sri Lanka’s air space, co-occurring with shifts in weather patterns and temperature caused by climate change.

“We sent a team of scientists from the University of Peradeniya to Kilinochchi and Mullaitivu to examine the animals and conduct post-mortems to determine the cause of their deaths,” she said.

“We cannot yet conclude that the animals died due to a pathogen, she said. “Once their reports come after the analysis, we could say whether the animals died owing to inhalation of toxic particulates in the air, or from a “cold shock” or both, she said.

“We think that the animals died from a cold shock because of the sudden temperature drop from the usual 32-35 degrees Celsius to 17 to 18 degrees in the areas where the deaths of hundreds of cows and goats had occurred. We are not going to overlook the “chilly” winds and the deteriorated air quality to which the animals were exposed,” she said.

When asked whether the Department of Animal Production and Health was expecting more animals to die in the event the cold weather continues, Dr. Kothalawala said that she had alerted the department’s district officers about it with instructions to assist the animals with medication for the cold shock and also fire pits, if necessary.

“But,” she said, “The weather has improved in the affected districts. The temperatures have gone up.”

Around 500 to 600 cattle had died in Batticaloa and Trincomalee, 300 animals died in Mullaitivu and Kilinochchi, and over 45 goats died in Jaffna.

The Northern and Eastern Province Animal Care and Health Departments currently care for the animals.

Dr. Kothalawala said that her department is gathering information on how many families and their livelihoods were affected by the animal deaths.

Beef and mutton transport suspended at district and provincial level

President Ranil Wickremesinghe has suspended beef and mutton transportation at district and provincial level with immediate effect as a public health safety measure due to the sudden death of animals in the North and the East.