Vavuniya tusker’s demise DID TOO MANY ‘COOKS’ SPOIL JUMBO’S RECOVERY? 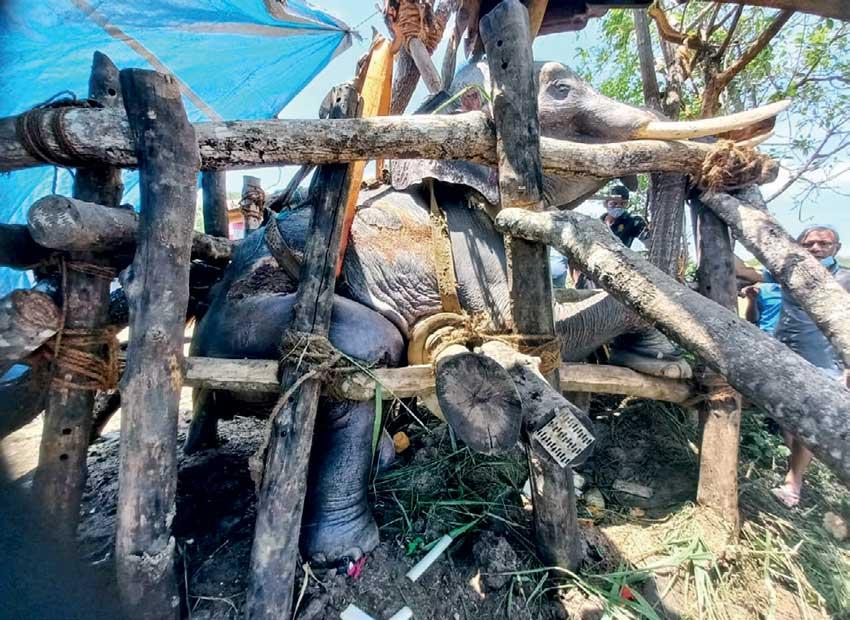 On June 11 Sri Lanka lost another one of its magnificent tuskers that succumbed to injuries while receiving treatment at Kanagarayankulam, Puthur, Vavuniya. But unlike any other elephant death that happens in the wild or due to a railroad accident, this particular incident gained more attention. Not only was this elephant suffering for many days, but on various occasions, several third parties also got involved in the rescue mission. What was of particularly concern was the involvement of an accused, currently released on bail, accompanied by a minister who has no connection to the subject of wildlife.

On May 8 this case was referred to Dr. Balakrishnan Giridharan, DWC’s Regional Veterinary Surgeon (Northern Province). “It was referred from our range office near Kanagarayankulam. On May 9 I attended the case and when I went there I found out that it was a juvenile tusker who was diagnosed with a spinal injury. It’s hind legs weren’t functioning and it couldn’t stand up. Every other day I treated it, but there were various other parties including monks and NGOs interfering. Then the Head Office informed us that some people were coming from Colombo as well.”

“By that time Dr. Chandana Jayasinghe was also present. But the prognosis was very difficult. Subsequently Dr. Tharaka Prasad, DWC’s Directer Health also arrived at the scene. Then these people started to lift the elephant with a JCB and pulled it out of the mud pool. It was around 50-60 metres above ground and usually when an injured elephant is lifted like that the injury would be grave because the lungs might collapse. Therefore that wasn’t the ideal thing to do,” he explained.

Apart from various parties including minsters and the clergy the participation of one particular person caught the attention of animal rights groups and those who were engaged in treating the elephant. Samarappulige Niraj Roshan, infamous for smuggling baby elephants and an accused released on bail, had also arrived at the scene with Ven. Magalkande Sudaththa thera of the Sinhala Ravaya organisation.

“An accused cannot work as a public servant and I spoke to the DWC Secretary and informed him that this person has no authority to get involved in the rescue mission,” Dr. Giridharan further said. “We continued to give saline to the elephant and asked people not to intervene. When I told the monk that this person shouldn’t be handling the elephant they shouted at me.” reminisced Dr. Giridharan.

Dr. Giridharan said that subsequently a belt was brought to the venue to hold the elephant on a crush. “By that time his legs weren’t functioning. Sadly on June 11, the tusker died and a team from University of Peradeniya conducted a post-mortem,” the doctor said.

Even though many claimed that the elephant’s injury had occurred as a result of a train accident, Dr. Giridharan claims that it is quite likely to have resulted from an attack by another male elephant since trains weren’t functioning for more than a month.

However, a few parties relate a different story. “The elephant was removed from the mud hole on May 23 and was moved to dry ground,” Directer-Conservation Projects at Justice for Animals and Nature Dominic Perera recalled. “Then we sprayed water to keep it cooler and that area got muddy again. It wasn’t life threatening as far as we observed. There could have been a permanent damage to the right front leg and a spinal injury with a rectangular indentation. There was nothing life-threatening, but the bigger issue was that it was receiving poor treatment. The elephant was underfed.

“On the first day when we were there the elephant was given vitamins and around 27 bottles of saline along with energy supplements. But it needed around 30-35 bottles of saline per day. What we have realised is that the DWC doesn’t have the necessary equipment to rescue an animal in such a situation. Therefore we need to take this incident as an example. Since there was no equipment to rescue the elephant there was an involvement of an unwanted person.” said Perera.

Perera further said that the elephant was lifted to an upright position to avoid any bacterial infections. “All three veterinary surgeons at the site were agreeable to keeping the elephant upright.

“However the mission was not properly executed and because the DWC was not equipped with proper equipment other people had to get involved. I didn’t know of a person by the name Roshan. But basically if there’s a court order against you, you are not supposed to be involved in any of these activities under any circumstances,” Perera reiterated.

The lockdown also had posed challenges in getting food required for the elephant and those at the site had to depend on villagers, the temple and the Army. “The elephant needs to be on a diet of around 15 kilograms every four hours. We were told that the elephant died due to breathing difficulties because the crush built to support the elephant didn’t really support it.” added Perera.

Following the incident, the Centre for Eco-cultural Studies (CES) issued a letter of demand to the Ministry of Wildlife and Forest Conservation, State Ministry, Department of Wildlife Conservation and the Attorney General’s Department requesting the authorities to take action against the unnecessary involvement of a person – accused of multiple charges including elephant racketeering, illegal possession of elephants, in the rescue mission.

“This incident was highly influenced by various political factions and there was constant interfering,” opined CES co-founder Sujeewa Jasinghe. “What was reported on television was that Minister Dilum Amunugama had visited the place on the orders of the President. But there is no such record as far as we know. Perhaps they may have gone following a verbal direction. However the Minister has facilitated an accused.” said Jasinghe.

Roshan and a number of other suspects, were arrested by the Criminal Investigations Department (CID) in 2018 over the illegal rearing of elephants and racketeering. The Attorney General then filed 27 charges against him and six other defendants under the Section 5(3) of the Public Property Act. Four defendants including Roshan were later acquitted by the Colombo High Court since the case was ‘laid by’ the bench of judges.

“The DWC is equipped with their own specialists. But these third parties had been visiting the venue from the beginning. Subsequently they have lifted the elephant when the vets asked them not to. Lifting an elephant affects its lungs,” said Jasinghe.

Illegally captured wild elephants were taken into Government custody and cases were filed against the culprits. However on March 12 a joint memorandum (MBRCA/01/07/12/01/2021) was issued requesting the withdrawal of these cases and releasing the illegally captured elephants back to their illegal owners under certain terms and conditions. Following this move, the CES has filed revisions against the Cabinet paper. Jasinghe observes that this is an extension of the Cabinet paper presented during Ranil Wickremesinghe’s tenure.

When inquired about interference of third parties including people with pending court cases during the incident, subject Minister C. B Rathnayake said that he has called for a report from the State Ministry as well as from the DWC as to why the accused in question arrived at the scene.

Even though the Daily Mirror contacted DWC Director General Chandana Sooriyabandara to inquire about the involvement of the accused in question he refused to comment on the matter. However Daily Mirror ‘Life’ learned that the post-mortem had been conducted and that the report would be available within a couple of days.