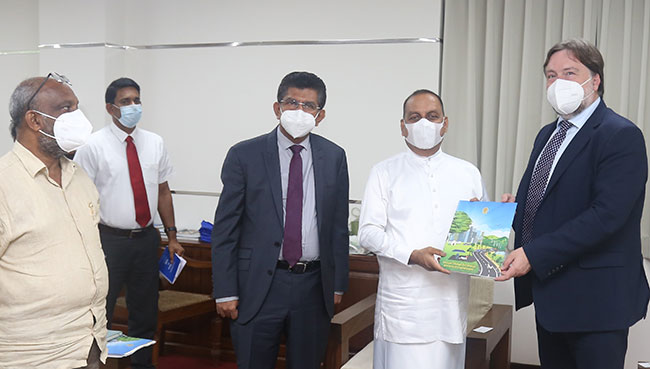 Sri Lanka is the best in South Asia as regards efforts being made to mitigate the effects of the climate emergency, Ken O’Flaherty, says Ambassador for Asia-Pacific and the South Asia Region at the United Nations Office for Climate Change (COP26).

The Ambassador invited the Minister of Environment and the Ministry Secretary to represent Sri Lanka at the International Conference on COP 26 Climate Change to be held in Belgrade in November this year.

The Ambassador also briefed the Minister on the manner in which the Sri Lankan government had implemented the decisions taken by the United Nations Conference on Climate Change to Prevent the Impact of Climate Change.

The Minister said that a number of policy decisions had been taken so far to tackle a number of issues that could contribute to climate change, in line with the Prosperity Vision Policy Statement presented by the current President Gotabaya Rajapaksa.

Amaraweera said that President Rajapaksa had decided against the construction of new coal-fired power plants and that 70 percent of Sri Lanka’s electricity needs would be met from renewable energy from 2030. It would also increase the use of hydro power as well as solar and wind power to generate electricity.

“We will build two LNG power plants and encourage the import of electric cars, and increase the country’s forest cover to 30 percent by 2030”, Minister Amaraweera told the visitors.

The Minister also said one of the objectives of the government was to improve the national transport services which are responsible for increasing air pollution.He also pointed out that the importation, manufacture, distribution and sale of a number of polythene and plastic-based products that caused environmental pollution had been banned in the country.

Amaraweera said that all those decisions had been taken on the instructions of President Rajapaksa to protect the environment.

Sri Lanka is also an island and could face more adverse conditions due to the adverse global impact, the Ambassador said.

However, he emphasised that Sri Lanka was ahead of other countries in the South Asian region in complying with international recommendations on climate change mitigation.

Ambassador O’Flaherty congratulated the government on such successes.

Several officials of the Ministry were also present on the occasion.