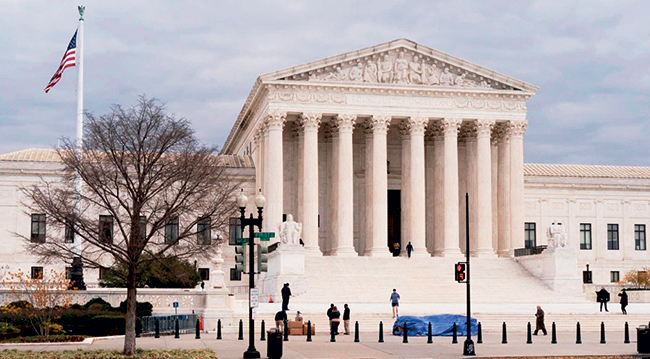 The Supreme Court of the United States of America is the highest court in the land, entrusted with ensuring that legislation is faithfully interpreted and enacted according to the Constitution, in word and in spirit.

The Court is presently comprised of nine Justices, nominated by presidents of the United States. As presidents are assumed to be elected by a majority of the nation, it is assumed that the Court also represents the will of that majority.

Unfortunately, that is not the case with the current Supreme Court. Five of its Justices were appointed by two presidents who won the presidency with a minority of the electorate.

Bush appointed two Justices to the present Court. Justice John Roberts in July, 2005 on the retirement of Sandra Day O’Connor. Roberts was subsequently appointed Chief Justice on the death Chief Justice William Rehnquist, who was replaced in January, 2006 by Justice Samuel Alito. Predictably, these new Justices were members of the Republican Party, with opinions tempered with traditional conservative values.

Trump appointed Neil Gorsuch to replace Antonin Scalia in 2017, Brett Kavanaugh on the retirement of Justice Kennedy in 2018 and Amy Coney Barrett on the death of Justice Ruth Bader Ginsburg in September 2020. All these Justices are light on judiciary qualifications and experience, but espouse the new, hardly traditional, radical right, Evangelical opinions of Trump’s Republican Party.

The sixth Republican Justice of the Court, African American Clarence Thomas, was appointed by the older Bush in 1991.

The Supreme Court has made several rulings in its history, based on politics, against the Constitution and the will of the people. The most egregious of these rulings are:

The Dred Scott decision in 1857 was the Supreme Court ruling that “African Americans could not be citizens of the United States, and therefore, had no standing in the US legal system, and the federal government had no authority to regulate slavery”. Chief Justice Roger Brooke Taney’s ruling “ignored precedent, distorted history, imposed a rigid rather than a flexible construction of the Constitution, ignored specific grants of power in the Constitution, and tortured meanings out of other, more obscure clauses”.A description which perfectly defines the recent decision of today’s radical right, Evangelical Supreme Court, overturning the rights of reproductive freedom granted to all women.

President Abraham Lincoln issued the Emancipation Proclamation on January 1, 1863, as the nation approached its third year of bloody civil war. The Proclamation essentially declared that “all persons held as slaves” within the rebellious states “are, and henceforward shall be free”.

The civil war ended in 1865 with the victory of the Union forces, at an estimated cost of 620,000 lives. Although four million Black slaves were granted their freedom, the Proclamation did not end slavery, but it “captured the hearts and imagination of millions of Americans and fundamentally transformed the character of the civil war”.

The hard-fought freedom achieved by the Union victory was freedom in name only, devoid of any vestige of equality. From 1865, “freedom” was subject to the racial ravages of Reconstruction, with restrictive laws designed to limit the freedom of the slaves. Reconstruction was followed by nearly a century of Jim Crow laws, which mandated legal segregation of the races.

Martin Luther King’s 1963 dream that the “momentous decree” of the Emancipation Proclamation “came as a great light of hope to millions of Negro slaves who had been seared under the flames of withering injustice. It came as a joyous daybreak to end the long night of their captivity”. However, that “joyous daybreak” took over 100 years to see the light of day, in the form of the Civil Rights Act of 1964.

His dream of “the day my four little children will one day live in a nation where they will not be judged by the colour of their skin but by the content of their character”, has only dawned in the legal sense. The “flames of withering injustice” of racism remain unfettered in the hearts and minds of a significant section of white America.

Franklin Delano Roosevelt won his second term in 1936 with, according to the New York Times “the most overwhelming testimonial of approval ever received by a national candidate in the history of the nation”. However, the election victory was tempered with a great fear that a hostile Supreme Court would vote to invalidate Roosevelt’s New Deal – a set of progressive programs designed to provide a safety net to those adversely affected by the Great Depression, and to initiate progressive legislation to improve the national economy. Specifically, the Supreme Court declared that the Social Security Act was “unconstitutional”.

Roosevelt decided not to undertake the arduous task of a constitutional amendment to pass his programs, which would have been possible given his vast popularity in Congress and the nation. In his opinion, it was not the Constitution that needed change; it was the Composition of the Supreme Court which would best allow him to continue the programs of the New Deal.

In February, 1937, Roosevelt asked Congress to empower him to appoint up to six more Supreme Court Justices, ostensibly to strengthen an aging Supreme Court. “Life tenure” argued Roosevelt, “was not intended to create a static judiciary. A constant and systematic addition of younger blood will vitalize the courts”.

Roosevelt’s plan touched off a grim struggle among the three branches of government. “If Roosevelt won”, opponents warned, “he would destroy the independence of the judiciary and create an evil precedent for successors who wished to ‘pack’ the Court”. If Roosevelt lost, his supporters countered, “a few judges appointed for life would be able to ignore the popular will, destroy programs vital to the welfare of the people, and deny the president and Congress the powers exercised by every other government in the world”. Both opinions have been proved to be valid, even complementary.

However, the latter opinion is particularly relevant to the current Supreme Court, which aims to “destroy programs vital to the welfare of the people” and so deny President Biden his powers to carry out his programs of progressive legislation. These include repairing of crumbling physical infrastructure of the nation, taking necessary steps to combat climate change, and enhancing the social safety net of those Americans who are most vulnerable.

Although the composition of the Supreme Court has been preserved, Roosevelt’s veiled threats to pack the Court staved off the invalidation of the Social Services Act and other progressive reforms. Roosevelt claimed that he “may have lost the battle, but he had won the war”.

That he did. His “socialist” programs continue to provide a limited social safety net to all Americans today.

The current Supreme Court, with its 6/3 radical right majority, overturned Roe v. Wade, the 1973 ruling granting reproductive freedom without government restrictions to all women. Roe v. Wade has been reconfirmed in the last 50 years by numerous subsequent Supreme Court rulings, and was considered to be the law of the land, popular with over 80% of all Americans.

The present Court threatens to make even more inroads to recently passed progressive legislation. Justice Clarence Thomas recently stated that the Court is taking a second look aimed at scrapping rulings that protect contraception, same-sex marriage and same-sex sexual activity. Even the Voting Rights Act of 1965 and the Civil Rights Act of 1964 are on the list of endangered legislation.

President Biden does not enjoy the popularity FDR enjoyed in the 1930s, although he did inherit an economy approaching recession caused by the Covid epidemic, which had been criminally mismanaged by the Trump administration. The economy has also been hit by the military assistance given to Ukraine to help a sovereign nation combat illegal invasion by Putin’s Russia, now globally described as a “terrorist government”.

The economy of United States is going through a period of near recession and unprecedented inflation, global problems which will be solved in the fullness of time. Biden’s presidency has brought fresh air of decency and integrity to the White House, compared to the stench of vulgarity, corruption and treason of the previous administration. Biden’s previously low popularity ratings have shown significant increases in the past few weeks. If the midterms were held today, most polls indicate that the Democrats lead the Republicans by seven to ten percentage points.

There are a couple of silver linings in these very dark clouds. Recent events indicate that Trump may be losing his stranglehold on the Republican party. His erratic, often maniacal behaviour and the irrefutable evidence emerging of his complicity in the January 6 coup, have the majority of the party questioning if his involvement in the November midterms would not be a liability. As Deputy Chairperson of the January 6 Committee, Liz Cheney said, “it is impossible to support both Donald Trump and the Constitution”.

A viable alternative for Republican leadership, of similar radical right persuasion but more educated and presentable, also seems to be emerging in the persona of Florida Governor, Ron de Santis.

The unpopular reversal of Roe v. Wade, which guaranteed reproductive freedom to all women in America, will take millions of votes away from the Republican Party in the midterm elections in November.As will the Independence Day mass shooting in Highland Park, Illinois, where seven people were killed and over 30 wounded by a 22-year-old white shooter armed with an AR 15 automatic rifle. The killer is in custody and faces seven murder and numerous other charges which will keep him prison for life. This tragedy marks the 314th mass shooting in the USA for this year alone.

Republicans keep blocking meaningful gun control regulations, including a total ban on military style assault rifles. Controls favoured by over 80% of the American people.These two factors – anti-abortion laws and the refusal to enact stringent gun control laws – may help Democrats get the majority they need in Congress in the midterms to address the real problems facing the nation. If the Republicans gain control of Congress, they will surely resume their down-slide on the slippery slope to a Theocratic Autocracy.

Proving the age-old platitude: Nations get the leaders they deserve.Of course, before, during and after the midterms, Trump and his hard-core cult will never give up on their aspirations for the perpetuation of white privilege. Nor will they tolerate the imminent arrest of Trump and/or his enablers, even in the face of undeniable evidence of their complicity in the January 6 coup. These thugs will “not go gentle into that good night”.

The USA may see violence surpassing that suffered during the civil war, in the next few months, until and unless the epidemic of Trumpism is finally stamped out. And this time, these home-made, white supremacist terrorists will be armed not with muskets and bayonets, but with military style killing machines.