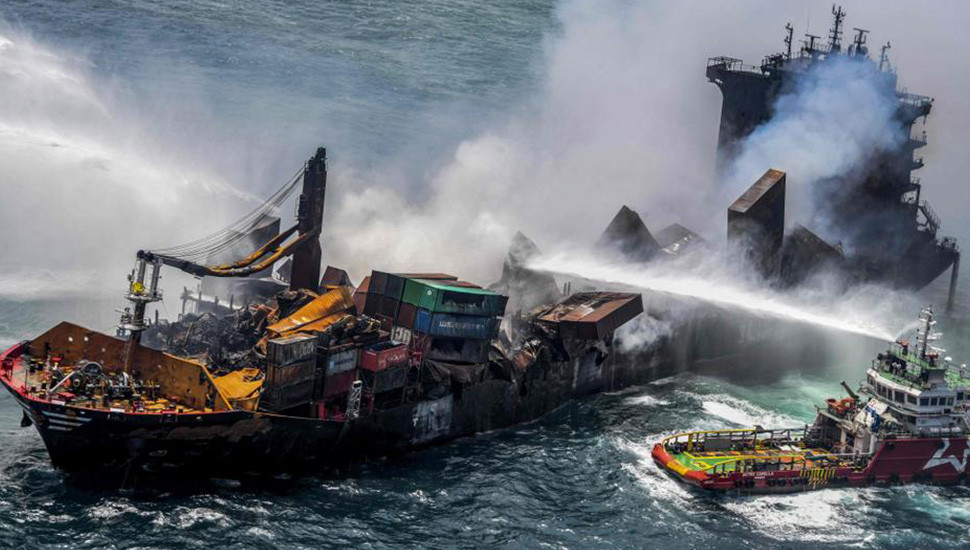 US based ‘The Maritime Magazine’, in an article published online on Sunday, said that salvors, Sri Lankan officials and satellite imaging providers have identified a ‘gray sheen’ emanating from the recent half-sunk wreck of the MV ‘X-Press Pearl’ container carrier, partially submerged off Sri Lanka’s Western Coast..

However, X-Press Feeders noted Saturday that there are “no confirmed reports of fuel oil pollution” from the vessel, the Magazine said.

To quote other excerpts from the Magazine, “Discoloration of the sea has been apparent since the vessel’s stern became submerged and the remnants of the cargo in the 1,486 containers that were onboard were exposed to water,” the firm said in a statement. “Inspections thus far by Sri Lankan Navy (SLN) divers have found no evidence of a breach to the ships fuel oil tanks and the salvors who remain on the with the SLN and Indian Coastguard have seen no noticeable fuel oil spill.”

Pollution control assets from the Indian Coastguard are standing by to provide containment if deemed necessary and representatives of the International Tanker Owners Pollution Federation (ITOPF) are monitoring updates from the scene. The salvage team has not yet announced plans for fuel lightering, hot-tapping or other risk-mitigation options.

The crew was aware of a leaking container of nitric acid in the hold before the ship called at Port Hamad, Qatar on11 May, 2021.

Port Hamad and the vessel’s following port of call, Port Hazira, India refused to allow the leaking container to be offloaded. Nine days later, cargo in that hold caught fire as ‘X-Press Pearl’ was waiting for a berth at the Colombo Port.

The cargo spill from the vessel has created economic costs: a regional fishing ban was imposed along a 50-mile length of coastline, creating hardship for artisanal fishermen. A substantial fraction of the waste has been substantially cleared off the beaches and the ban has since been lifted, and about 9,900 fishermen affected by the pollution from the vessel will receive an allowance of US$ 25 beginning 15 June (yesterday).

Meanwhile, fisher representatives brought to the notice of Fishery Minister Douglas Devananda six problems they were facing as a result of the recent ‘X-Press Pearl’ Container Carrier disaster, at a meeting held at the Negombo Municipal Council Auditorium on Friday.

Devananda in his speech said that he’s aware that fishers in the Gampaha and Colombo districts have lost their means of livelihood consequent to the ‘X-Press Pearl’ disaster. Environmental experts have brought to his notice the massive impact that this disaster has had on the marine eco system, he admitted.

Nonetheless, there are four matters which the authorities need to handle simultaneously and immediately to prevent another socioeconomic catastrophe emanating from the ‘X-Press Pearl’ fiasco. Those are to provide immediate relief to the indigent fishers and their families impacted by this disaster in deed, to take proactive steps to prevent an oil spill from the sunken container carrier, to remove what remains of the 1,486 containers still on board the sunken vessel to avoid further marine pollution and to take punitive action against those responsible for allowing this vessel with a leaking container of chemicals to berth in the Colombo Port when the ports in Qatar and India had already refused berthing permission.

Love for one’s country has to be shown in deed and not in words only.