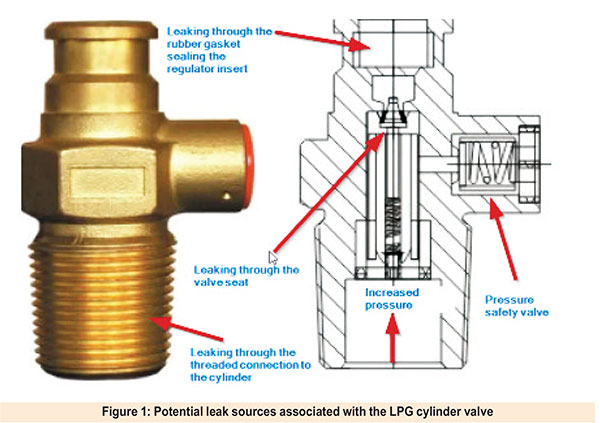 Recent explosions and gas leak accidents related to domestic LP gas cylinders have created an environment of fear, anxiety, and social unrest throughout the country. More than 400 explosions and gas leak incidents have been reported during the first week of December 2021. In addition, a large number of observations have been made with respect to leaking gas cylinder valves.

The reported accidents and incidents can be divided into four major categories: (a) Sudden gas explosions inside houses and building, (b) Sudden explosions associated with the gas cooker, (c) Major gas leaks and resulting damages associated with the regulator and the hoses, (d) Minor gas leaks from the cylinder valve, regulator, or the hoses. The number of accidents reported during a single week has far exceeded the typical gas-related accidents happening within a typical year. Something must have gone terribly wrong for Sri Lankan LP gas consumers. Unconfirmed reports now indicate potential deaths, associated with some of these gas explosion accidents.

Liquefied Petroleum Gas, abbreviated LPG, is an energy carrier derived during crude oil refining or natural gas processing. In petroleum industry terminology these are called gas condensates and are byproducts often generated during the production of liquid fuels (gasoline, diesel, and kerosene) or natural gas (methane). The key components of typical LP gas are propane (an alkane gas containing three carbon atoms – C3H8) and butane (an alkane gas containing four carbon atoms – C4H10). In addition, small amounts of propylene, methane, pentane and other minor constituents can be present. LP gases do not originally have a clearly recognizable distinct odour. Therefore, in order to identify any gas leaks, methyl mercaptan (CH3SH), or a similar odour generating component, is added to LP gas before commercial use. Table 1 provides a useful comparison between propane and butane, with respect to key physical or chemical properties.

Depending on the refinery process, or intended use, LP gas can have a widely varying propane and butane composition. Under normal atmospheric pressure, butane has a higher boiling point of minus 0.5 degrees Celsius (-0.5) compared to propane’s minus 42 degrees Celsius (-42) boiling point. That means in colder climates, where the ambient temperature could go below 0 degrees Celsius, the LP gas must mostly contain propane in order to use that as a fuel gas (otherwise it wouldn’t flow as a gas, as butane would remain in the cylinder as a liquid). Therefore, the butane content is greatly reduced in LP gas used in colder climate countries, typically less than five percent of the volume. For tropical countries, like Sri Lanka, having a high butane content is just fine, as the year-round temperature is almost always above zero degrees Celsius (except for some rare occasions in locations at higher altitudes). Further, butane is a much safer gas to use. This is due to its much lower vapour pressure (31 pound per square inch) compared to that of propane (124.5 psi). Therefore, the containment integrity requirements shall be much stricter for propane use, compared to butane. (figure I)

Unlike compressed gas cylinders, LP gas cylinders are not filled with 100 percent gas. Instead, a new cylinder would contain the liquids, hence the name LP gas, to about 85 percent volume. Only the remaining 15 percent ullage volume (the volume left empty in a tank for the liquid to expand) contains actual gas. These two phases (liquid and gas) are in equilibrium. The pressure within this gas filled ullage is the equilibrium pressure of the corresponding liquid mixture (of propane and butane). This equilibrium pressure can be predicted based on the ambient temperature and the composition of the liquid phase. Table 2 provides the values of these equilibrium pressures (in pounds per square inch gauge or psig) for different propane-butane mixtures at the temperature of 32 degrees Celsius (which is quite close to the typical ambient temperature in Sri Lanka). (Figure II)

As can be seen from Table 2, at 32 oC temperature, a mixture of 80 percent butane and 20 percent propane has an equilibrium pressure of 53.6 psig. This was the composition used in Sri Lanka for a long time. All appliances (including gas cookers), pressure regulators, hoses, hose connectors, gas cylinder valves and cylinders have been accustomed to this pressure condition. In other words, our consumer gas utility system has been calibrated at this pressure condition. Nevertheless, gas cylinders themselves are manufactured to tolerate a much higher pressure.

If the butane-propane composition is suddenly changed to 50 % butane and 50 % propane, now the increased propane content leads to a much higher equilibrium pressure of 89.4 psig. It is obvious that this is a very significant pressure increase from the previous condition.

Increased propane content leads to a significant increase in gas pressure inside the cylinder. This is because propane has a much higher equilibrium vapour pressure compared to butane (see Table 1). Now, the whole utility system on the part of the customers faces a containment integrity problem. In other words, gas leaks are likely to happen from many of the system components. Table 3 elaborates potential impacts of this pressure increase on different system components. Figure 1 further illustrates potential leak sources and pathways associated with the gas cylinder valve. (Figures III and IV)

What happens during a gas leak?

Propane and butane are flammable and combustible gases, when mixed with air (or oxygen). Within the approximate volume percentages of 2 to 10 percent (within LEL- Lower explosive limit and UEL – Upper explosive limit), these gases can create an explosive gas mixture when exposed to air; see Table 1. Outside of this volume percentage range, the gas would not ignite. However, at higher gas concentrations, the gas cloud can still pose an asphyxiation hazard to humans as it displaces breathable oxygen in air.

Even a minor gas leak in the cylinder valve, regulator, or any other component (see Table 3 and Figure 1) can lead to the accumulation of the gas inside a building, over several hours. Note that both propane and butane gases are higher in density compared to air (heavier than air; see specific gravity values shown in Table 1). Which means, when a gas leak occurs the explosive gas cloud accumulates close to ground level (rather than moving upward and dissipating). This situation is more likely to occur at night when doors and windows are closed, with consequently little or no ventilation. If the leaked cloud of gas reaches the concentration of LEL within that surrounding (for example a kitchen), then it is a bomb waiting to be triggered at any time. The only thing required is a small spark, which may occur when an electrical switch makes contact (on or off), or even due to static electricity present in the atmosphere, or due to an actual flame such as lighting a match. At that moment, an explosive combustion reaction occurs within the flammable gas cloud and the energy released is transmitted as a pressure wave accompanied often by a fireball. This is a typical atmospheric gas cloud explosion. Secondary damage can occur due to projectiles (broken glass for example), prolonged fires, collapsing roofs and walls.

Changing an existing LP gas composition without a detailed safety assessment is an act of sheer negligence bordering on absurdity. It’s a fundamental process engineering principle to follow a comprehensive Management of Change (MoC) protocol before making this kind of, or even far less consequential, change to a product, process, or an operating procedure. Even a Process Engineering Trainee can explain this to production management. As part of an MoC process, it is absolutely necessary to conduct a dedicated risk assessment or a standard safety study such as ‘HAZards and Operability’ (HAZOP). Had such HAZOP been conducted in this case, many of the problems we have indicated in Table 3 could have been identified in advance, avoiding calamity in consequence.

The heat energy contents of propane and butane are respectively 49.58 and 47.39 megajoules per kilogram (MJ/kg). However, the density of liquid propane and butane are 0.51 and 0.58 kilograms per litre (kg/L) respectively. That means due to the lower density of propane compared to butane, propane has a slightly lower energy content when based on volume (25.3 and 27.5 MJ/L respectively). Propane burns with a slightly higher flame temperature compared to butane (1980 vs 1970 oC). In certain gas burners, propane could burn with slightly higher efficiency compared to butane (with less deposition of carbon).

If calculated based on the heat energy content delivered (measured by BTU-British Thermal Units), propane is often a cheaper energy commodity compared to butane in the world energy market. Therefore, an LP gas mixture rich in propane can be cheaper. LP gases with more propane are also easier to procure. While per BTU price is cheaper, if calculated based on metric ton price, one can be misled to believe that propane is more expensive than butane. This becomes a false assumption if all gas pricing and market economics are based on the value of BTUs (energy) delivered to the customer (customer is made to pay for the heat energy content delivered to them, and not for the weight of the gas). Also note that the exact price of a certain LPG shipment can be very different from the typical spot prices prevailing in the world energy market.

In a good safety culture Management of Change protocols are always followed; when an accident or an incident occurs, it will always be investigated to the fullest extent and all lessons to be earned are extracted; transparency and honesty are always maintained; instead of finger pointing, their own faults are admitted; no attempts are made at concealing information; safety is always given priority over marginal economic gains. In contrast, the complete opposite of these is to be expected of an organisation with a negative safety culture.

Any investigation into the recent series of unfortunate gas related accidents in Sri Lanka must not stop at merely identifying plausible physical causes. Such investigation must definitely look deeper into related organisational factors, and make necessary recommendations to bring about much needed organisational reforms in the form of enhancing safety culture. In addition, more systematic safety management requirements and stricter regulatory reforms must be recommended to avoid repetition of this kind of ‘organizationally rooted accidents’. Failing to do so may lead to greater disasters of higher magnitude in future. Prompt compensation to those who faced harm must be a priority. Even more urgent is to recall every single gas cylinder delivered with hazardous pressure conditions, irrespective of whether the gas has been used or not. As explained before, LP gas cylinders will retain the same high pressure condition until the last drop of liquid is vaporised. Therefore, unused as well as almost fully used gas cylinders will pose the same level of leaking hazard.

(Facts presented in this article are based on information available on the public domain. The analyses and opinions are based on the author’s experience in the industry, and do not reflect the opinions of any institution.)