Ship to be moved despite compensation concerns 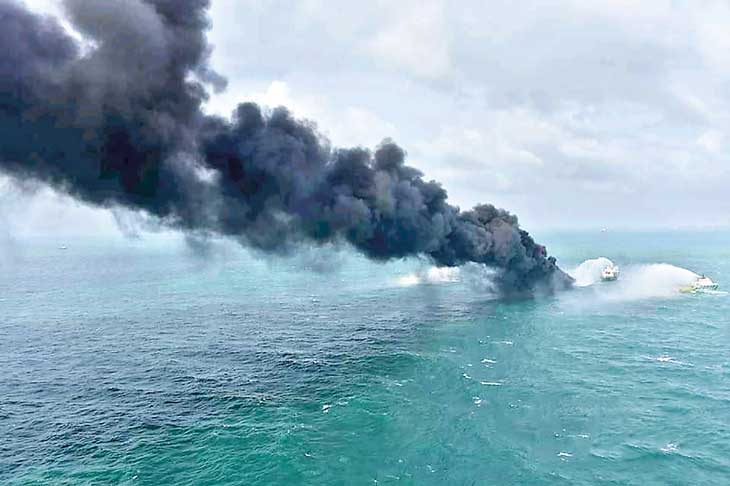 Despite concerns raised by environmental organisations concerning the possibility of Sri Lanka losing jurisdiction when seeking compensation, President Gotabaya Rajapaksa has ordered the MV X-Press Pearl ship to be moved from its present location into deep seas.

The President’s Media Division (PMD), issuing a media release late yesterday (1), said President Rajapaksa had issued these instructions to the MEPA in order to mitigate the negative impacts to the environment from the troubled and troublesome vessel. The instructions had been issued following a request made by the latter at a special discussion held concerning the disaster yesterday.

Meanwhile, the Centre for Environmental Justice (CEJ) told The Morning yesterday that recovering compensation would be complicated if the vessel was moved.

“It is not easy to recover compensation as we do not have adequate laws that would ensure our claim to it. However, it is important that the ship does not at least leave our waters as we may lose jurisdiction over it then,” said CEJ Executive Director Hemantha Withanage.

He added that the CEJ is hoping to take legal action against the environmental disaster that has occurred following the fire onboard the MV X-Press Pearl ship, which docked close to the Colombo Harbour on 20 May.

Withanage said that they are seeking legal recourse on two grounds, namely to ensure that the ship’s owners and agents pay the proper compensation to the country and also to question as to why Sri Lanka is lacking an emergency response team to deal with such matters.

Speaking to The Morning earlier yesterday, Ministry of Ports and Shipping Secretary U.D.C. Jayalal said that currently an action plan has been requested from the ship’s agents on whether the ship can be moved into the deep sea.

When questioned as to the concerns from environmental groups about the loss of jurisdiction in such an event, Jayalal said that since the inquiry has already begun and the ship’s crew is within Sri Lanka, legal proceedings would continue.

It was further reported yesterday that the Colombo Magistrate’s Court has issued an order preventing the Captain, the Chief Engineer, and the Second Chief Engineer of the MV X-Press Pearl vessel from leaving the country. The MEPA filed a police complaint about the ship last week.

Moreover, the Sri Lanka Navy said yesterday that although the fire is mostly contained now, it has deployed nine divers to investigate a suspected water leak in the stern area of the ship.

Meanwhile, commenting on the environmental harm caused by the ship to the country’s western coast, Withanage said that the real concern remains with the plastic pollution caused by the spillage of pellets, which are reportedly washing up on the beaches in the area.

“The nitric acid, which the ship was carrying, reacts with salt water and forms sodium nitrate which is not harmful. Although acidification would impact the corals to a certain extent, eventually the chemicals would be diluted. The danger of acid rain has most likely passed as well, as the weather has turned. The biggest problem, however, is the plastic pellets,” said Withanage.

Central Environment Authority (CEA) Chairman Siripala Amarasinghe informed The Morning that it is vital that all the plastic that is washed up on our shores is collected and recorded properly as it could be used as evidence in our pursuit of environmental compensation. Amarasinghe added that the CEA district director generals are continuously engaged in this task of collecting the plastic pellets and other debris.

Withanage also questioned what other cargo the ship contained and urged the Sri Lanka Ports Authority (SLPA) to be transparent about the matter. All attempts by The Morning to contact the SLPA yesterday proved futile.

However, MEPA officials told The Morning last week that three containers of plastic pellets, weighing 26,000 metric tonnes (MT) each, had been present onboard the ship, although it is unclear as to whether all of it had spilled into the ocean.

The fire initially broke out onboard the ship on 20 May, five days after its departure from the Indian Port of Hazira on 15 May. According to the SLPA, the ship had not informed the Colombo Harbour of the nitric acid leakage in one of its containers until it had anchored in Sri Lankan waters, approximately 9.5 nautical miles away from the Colombo Harbour. However, the leakage has reportedly been present since the ship had docked at Qatar. An explosion last week worsened the fire onboard the ship and caused 10 containers to topple into the ocean.