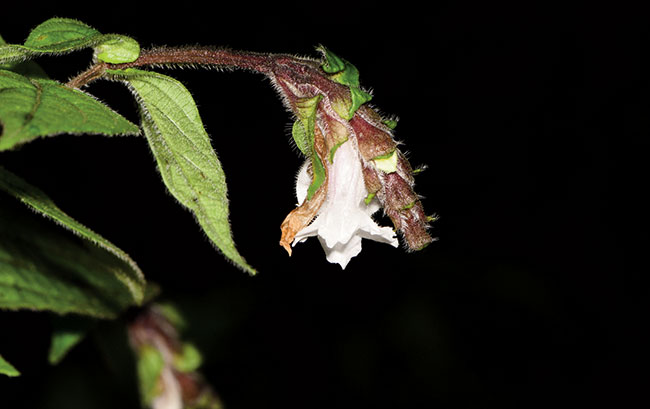 Sri Lankan scientists have discovered a new species of Nelu, Strobilanthes medahinnensis (Acanthaceae) based on morphological and molecular data, from the Peak Wilderness Nature Reserve.

The research team includes Nilanthi Rajapaksa, Nuwan Jayawardena of the Department of Wildlife Conservation, Prof. Cyril Wijesundera of the Institute of Fundamental Studies, Kandy, Prof. Pradeepa Bandaranaike of the University of Peradeniya and Hiruna Samarakoon.

Nearly 450 species of Nelu spread around the world, most of which are found in tropical and subtropical Asia. With the discovery of the new species, there are about 33 species of Strobilanthus found in the natural environment in Sri Lanka, of which 27 species are endemic to Sri Lanka. Fourteen of these species are protected by the Fauna and Flora Protection Ordinance (FFPO).

Lead Scientist, Nilanthi Rajapakse, first observed several of this species in September 2015 in the Medahinna area of the Peak Wilderness Nature Reserve.

Subsequently, the research team found that the height of the reserve ranged from about 1400 m to 1500 m. This new species bears a striking resemblance to the Strobilanthus anceps Nees. The flowers of both species are white, the leaves are oval, the tips of the inflorescences are bent backwards to protect the inflorescence, and the yellow glands are located on the underside of the leaves.

Chloroplasts used as DNA barcoding to distinguish the new plant species from the other closest plant species, S. anceps. Furthermore, it explains how these two plant species separated into two species 0.33 million years ago.

The team told The Island Nelu has medicinal value for many ailments. Allowing the growth of other flowering plants in the forest due to the death of flowering plants from time to time plays an important ecologically role. It also helps maintain soil moisture. Young plucked plants are a delicacy of deer. Many birds and bees come to drink the nectar of the harvested flowers. Nelu is the host plant of some butterfly species.

The species has the ability to be used as a mature woody twig. Dyes such as indigo, are produced from the leaf extract of most harvested species. Land use for economic crops, illegal use of land, deforestation due to development projects, invasive plant growth, collection for firewood, arson, and climate change threaten plants. Due to these reasons, about 21 species of Nelu that are endemic to Sri Lanka are threatened with extinction.

Although the population was not flowering at that time, this appeared distinct in leaf characters of its morphologically closest ally S. anceps Nees (1837: 312). “We conducted extensive plant explorations across the entire distribution range of Strobilanthes in Sri Lanka covering 21 administrative districts from January 2012 to September 2020. However, this new plant was not found in any other location except Medahinna and we visited Medahinna several times to study this population since 2015. Finally, on 29th June 2020, we could observe flowers in the population at Medahinna,” the team pointed out.

After a closer examination of the specimens and critical study of the literature, comparison of the specimens at National Herbarium, Royal Botanic Gardens, Peradeniya (PDA), and online herbaria. “We found that it is different from all known species of Strobilanthes in the world. In addition to the preparations of distribution map, superlative photographs, and meticulously illustrated line drawings, the complete chloroplast genomes of this interesting material and S. anceps were also analysed. According to morphological and molecular evidence, it could not be assigned to any previously published species; hence it is described as a new species,” the team added.

The team thanked the Director General, Department of Wildlife Conservation, Sri Lanka (DWC) for the constant encouragement and facilities provided. They also thanked and Department of Forest Conservation, for permitting those to collect samples and the Agriculture Biotechnology Center, the University of Peradeniya for molecular analysis and the National Herbarium (PDA), the Royal Botanic Gardens, Peradeniya for the assistance in specimen examination, to Rukmal Ratnayake for the line drawings and acknowledged the Ecosystem Conservation and Management Project (EACAMP) for financial support.

Are we right royally screwed up?