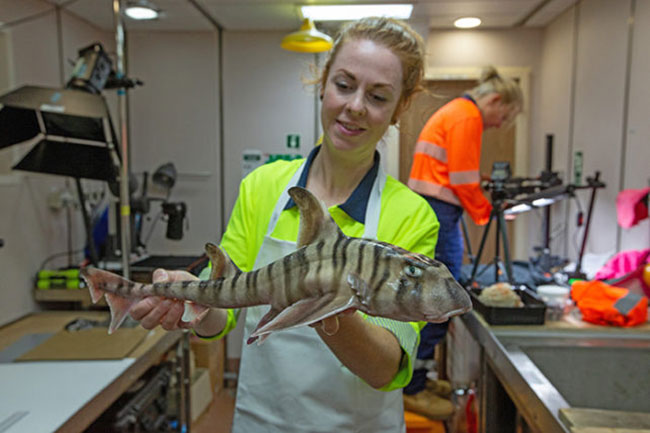 After discovering a host of bizarre creatures of the deep near Cocos (Keeling) Islands, Australia’s national science agency CSIRO has found something quite surprising in the depths of the watery abyss: a shark graveyard, full of fossilized teeth, some millions of years old, said a report published by the Science Alert yesterday.It said: Initially, researchers thought they’d pulled up a net full of disappointing sediment and manganese nodules. Until they had a closer look.

“Not all were fossils, some were relatively recent mako sharks and two species of great white shark relatives.”

More than 750 mineralized teeth, representing a range of predatory species, were hauled up from a depth of 5.4 kilometers (3.3 miles).

Western Australian Museum’s fish curator Glen Moore says the discovery contained an interesting mix of modern and ancient shark parts, including some from the immediate ancestor of the megalodon.

“This shark evolved into the megalodon, which was the largest of all sharks but died out about 3.5 million years ago,” says Moore in a statement.

Megalodon sharks were so massive they could have swallowed today’s largest shark, the great white (Carcharodon carcharias), whole.As sharks have cartilage skeletons rather than bones, most of their remains decompose before they become fossilized, except for their teeth and the occasional scales. So these remains are the only clues we have of these ancient animals’ 450 million-year history on Earth.Why so many of these remains, spanning such a long period of history, were gathered in one place is unclear.

“I don’t know of any obvious explanation of why they might all be together other than perhaps it was a low point in the ocean floor, so they would eventually make their way down,” Moore said.

The graveyard of predators was found during an investigation of two new marine parks, located 2,500 kilometers (about 1,500 miles) off Australia’s west coast.

The CSIRO research vessel that found the graveyard, the aptly named Investigator, has since embarked on another trip, this time to Gascoyne Marine Park off Western Australia, where the vessel has also floated across a new shark species.

“Early in the voyage, we collected a striking small, stripey hornshark,” says CSIRO ichthyologist Will White in a statement.

The hornsharks we already know of tend to hide amongst rocks and seaweed on the shallow seafloor during the day, emerging at night to feed. They also lay the most peculiarly corkscrew-shaped eggs. But this new species was found in water over 150 meters deep, where such cover as seaweed isn’t available.

“It’s been estimated that around a third of the species collected on recent biodiversity survey voyages on RV Investigator may be new to science,” says CSIRO marine ecologist and expedition leader John Keesing in a statement.

“The discoveries we make aren’t just limited to new species. These voyages give us the opportunity to learn more about marine ecosystems, as well as species range, abundance, and behaviour.”