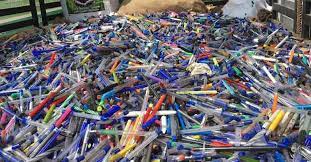 The extensively used Carbon pens and toothbrushes that are thrown away after use, take over 400 years to decompose. The amount of ballpoint pens discarded per day in the country’s school system is around 80-100 Kg, Environment Minister Mahinda Amaraweera remarked. He also pointed out that there are no definite statistics on the quantities of toothbrushes and ballpoint pens discarded in this country on a daily or yearly basis by public and private institutions.

The Minister added that the Ministry of Environment has been able to deliver roughly around a thousand containers to collect the discarded brushes and pens, to schools, Government organisations, and Ministries. He noted that it has been confirmed that the micro-plastic molecules formed would remain in the soil even after 1,000 years.

“These containers will also be provided to all Government and private establishments in the country. The Government will not spend a single rupee on this. The required financial aid will be obtained from the private sector. The overuse of plastics and polythene has resulted in a major environmental issue in the country today.

Polythene and plastics, in particular, have a significant influence on soil, air, and water pollution,” he said. He said that as a Government, they will adopt all conceivable measures to minimise and manage the usage of these as much as possible, adding that a number of disposable polythene and plastic items have already been banned. The Ministry of the Environment has initiated a programme to collect disposable carbon pens and disposable toothbrushes from schools and government facilities, as well as from homes.