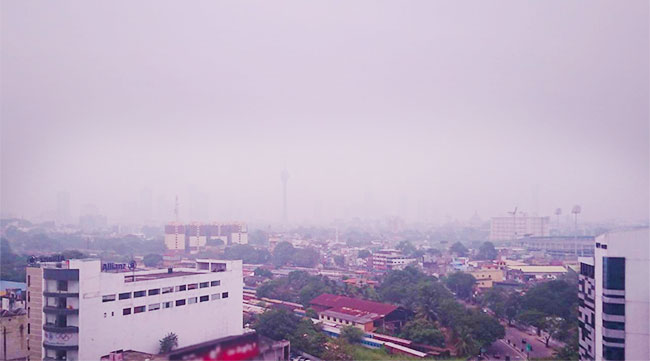 Public concern is increasing about the high levels of air pollution in Sri Lanka, where the air is described as unhealthy for the general population. This assessment is based on the air quality data expressed as an Air Quality Index for a number of cities of Sri Lanka. Just three days ago, Jaffna recorded the highest degree of air pollution with a value of 294, followed by Kurunegala, Anuradhapura, Kandy and Colombo. From November onwards, air quality levels in Colombo have exceeded the 150 value (which is considered as the safe level) and which can be classified as “unhealthy”. By contrast, New Delhi, which has the highest level of air pollution in the world, typically has values of around 350 and the air is classified as “hazardous”.

These values are based on the levels of fine particles, which we call PM2.5, composed of particles with a diameter less than 2.5 microns. A micron is one millionth of a metre and such small particles are invisible to the naked eye. They are generated primarily from motor vehicle exhaust fumes, industrial activities, biomass burning and coal burning power plants. In India, the ever increasing number of motor vehicles, traffic congestion, are the contributing factors; and the air pollution level further deteriorates every fall, as farmers in nearby states burn crop stubble to prepare fields for the next planting season. These pollution clouds generated in India can travel thousands of kilometres to Sri Lanka during the north-east (NE) monsoon. This is what is referred to as transboundary air pollution.

My own research carried out from 1996-2003, showed that acid rain occurs in places like Anuradhapura and Mahailluppalama during the NE monsoon. We were not able to get any data for Jaffna at that time owing to the war situation. These results are further confirmed by the current air pollution episodes, where Jaffna recorded the highest values on certain days earlier this week. Jaffna, which is the major city closest to India, gets a high dose of pollution from the Indian subcontinent. The highest recorded value in Jaffna on December 6th was 294, while it was 220 in Colombo and 262 in Kandy. These values are in a very unhealthy region.

When we breathe air particles enter our respiratory system. Out of these, the larger particles are filtered due to movement of hair and cilia along the upper respiratory tract, but particles with diameters less than 10 microns (PM10) enter the lung, where they get lodged to the alveolar tissues of the lung. Particles disrupt the protective mucus layer of the alveolar tissues, and viruses and bacteria can readily enter the respiratory system through the ruptured mucus. Much smaller particles such as the PM2.5 can even enter the bloodstream. Particles in the category of PM10 cause blood vessel narrowing, increases stickiness of blood, increases clot formation and makes the heart beat irregularly. This results in an increase of the risk of coronary heart disease, and a previous study by the WHO reported that around 8000 deaths due to heart diseases are due to air pollution in Sri Lanka.

Particles are considered as the most dangerous air pollutant. Fine carbon particles, in addition, have polyaromatic compounds such as carcinogenic benzopyrenes attached to them, and since these are well known to cause cancer and prolonged exposure may cause lung cancer. These can lead to respiratory diseases such as bronchitis, pneumonia, chronic obstructive pulmonary disease and exacerbate asthma. Other milder symptoms such as sore throat and breathing difficulties may also appear.

Air quality data, taken from December 6th till now, indicate that air pollution is high in relatively less congested places like Hambantota and Mullativu. Local traffic and other pollution sources are minimal in these two towns and transboundary air pollution has made the air unhealthy. Therefore, it is essential for the authorities to regularly inform the public on the degree of air pollution for all localities of Sri Lanka. My own research several years ago confirmed that Kandy is far more polluted than Colombo, and a lot of people were sceptical about my proposition at that time; but the current data indicate that on several occasions AQI for Kandy exceeded that of Colombo.

The current unhealthy trend in air quality is likely to continue till February next year, which is the end of the north-east monsoon. People should wear face masks whenever they move out of the house, and doors and windows kept closed at all times. Vigorous exercise and outdoor activities such as walking and jogging should be avoided. Transboundary air pollution is a global phenomenon, and while we have signed the Male declaration on the prevention of transboundary air pollution in south-east Asia, no effective action has been taken by any of the signatories to this declaration.

Eight institutions under Agriculture Ministry to be merged