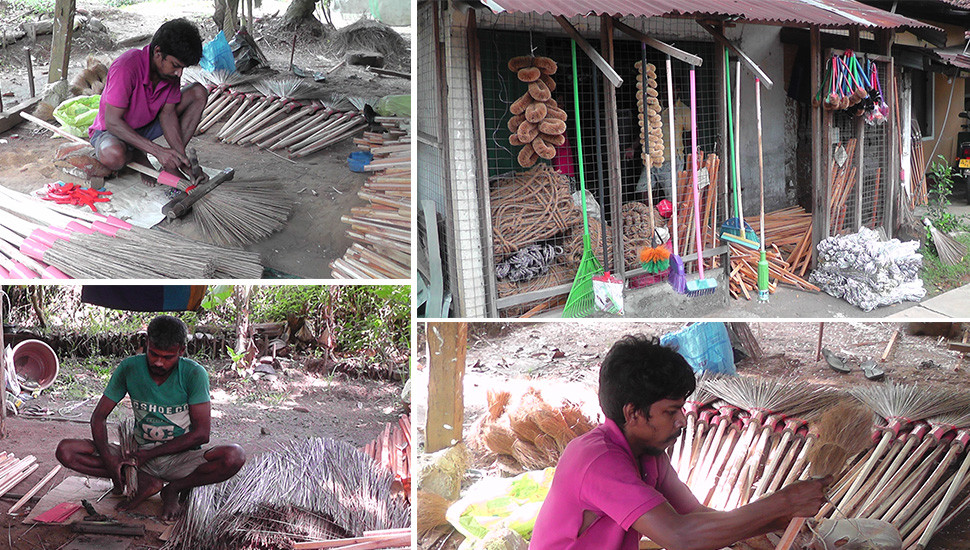 Even though the world has developed in many aspects, the humble eco-friendly broom faces dire straits. Local broom makers have been dealt a severe blow with no redemption in sight to their plight. Still the broom and ekel broom have been identified as essential in our day-to-day cleaning of the home and garden.

Currently, eco-friendly products are being produced and are hailed as being ideal for the environment but the humble broom has been blatantly ignored. Broom producers lament that they could not see a plausible solution any time soon with the rise in prices of raw material and inability to purchase raw material at fixed prices .

However, now it is rare to find a home with a broom made of coconut fibre. Although, the domestic industry produces eco-friendly products, still with the introduction of plastic products that are harmful to the environment, the demand for locally manufactured fibrebased brooms has reduced drastically, lamented local broom producers.

Broom producers of Walakumbura and Kapuarala area which belongs to the Alawwa Divisional Secretariat, said they were facing a dire situation with the shortage of raw materials and the soaring costs. D. A. Chamila Dissanayaka, a resident of Kapuarala village said they were producing brooms with a handful of and said there was no control price for their products.

She added, “previously, we had to spend Rs. 45 to buy a Kg of ekel for an ekel broom and we sold the product at Rs 90. However, currently, the price of ekel has risen by leaps and bounds, all the same we are compelled sell an ekel broom at the former price of Rs 90, thus incurring a loss in the process.” “The price of a kilo of ekel fluctuates depending on various conditions.

Especially, during the festival season, prices increase. “Even though we purchase a kg of ekel, it naturally reduces while being cleaned and about 200 grams goes to waste.

We don’t have a proper market to purchase raw material and thus it has severely impacted the manufacturing process,” said Dissanayaka. She further said they had brought this issue up with Minister Prasanna Ranaweera, who is in charge of local manufacture and even inspected the area.

“We have informed him of the issues we face but so far we have not been given a response and no solution has been forthcoming. The Government has not provided us with any facilities to raise the standard of our business.” “Now, we are in a situation where we face closure due to the problems we are facing and with no fixed price for our products, it is difficult to continue with this trade”added Dissanayaka. In Sri Lanka and in many other countries, the demand for plastic has increased and people are not interested to buy locally manufactured coir and wood products.

If this trend continues, we will have to fold up. Our people will lose their jobs and have no other way to earn a living”, she said. Another issue we face is finding wood for broom sticks.If we carry mahogany wood or any other wood for that matter, the police will pursue us. Mahogany which is four feet in length is required for the broom handles” .

The authorities have been informed. However, so far no response has been forthcoming as regards this as well, we haven’t received any proper responses from them and we urge the authorities to pay attention to our concern and resolve it as soon as possible. A resident of lower Walakumbura, Shanthasiri Perera, said this was their livelihood and had several issues which they faced while continuing in this trade. She also said that this is their selfemployment and they are not working under anyone.

“Raw material which we need to manufacture brooms were expensive and also there was a shortage. Currently, the coconut husk which we use to make coir, are exported and due to this, we are suffering without proper material for our manufacture. Since we order on a priority basis from our suppliers, they charge a high cost for the raw material but were at the crossroads as the price of their products could not be increased.

He also pointed that they cannot see any income forthcoming from the business as they cannot increase the price of their products. “Previously, during the festive season, there was an increased demand but with the emergence of plastic products, there has been a drastic reduction in the purchase of these products. We worked day and night hard to produce and supply them to the people.

However, now, we don’t have the resources even to continue our daily work. In the past, we used huge lorries to distribute our products, now it has also changed and currently, we have no products even to fill a small Demo Batta lorry,” said Perera. He said that they have already informed the State Minister of Rattan, Brass, Pottery, Furniture, and Rural Industrial Promotion, Prasanna Ranaweera, regarding their issue and he has visited their village to see the status of the business.

He promised that they will support to improve our business. However, to date we haven’t received anything from anyone”, he added. Another resident of lower Walakumbura, Nimali Sanjeewani, said that they cannot spend more money to buy raw materials if they can’t sell the product at a high price. The price of everything has increased.

even the price of nails needed to fix the ekels and the coir to the sticks have risen and at present costs Rs 230 but prices of our products remain and we are unable to do any changes in the prices of our final products”, she said. Meanwhile, she added that they are maintaining the workplace amidst many difficulties.

Already some of their colleagues have moved out to other jobs as this was not paying anymore. The authorities and officials always promise us saying that they will help us to grow our business. However, till today we haven’t received anything from anyone. We request the authorities to help us by reducing the prices of raw materials and a fixed price for products.

While speaking on the issues faced by these people Science and Technology Officer of the Alawwa Divisional Secretariat, W. M. Malkanthi, said these manufacturers continously lamented regarding the issues they were facing. The major issue they pointed is regarding the delivery of wood and have even brought it to the notice of the Minister.

Regarding the issue of ekels, he said Minister Ranaweera will look into it andfind a solution. As regards the export of these broomsticks, she said the Minister has said that he will speak to relevant export companies to resolve the issue. She further noted that solutions to all these issues will soon be dealt with and were expecting a positive response soon from the Minister and other relevant officials.