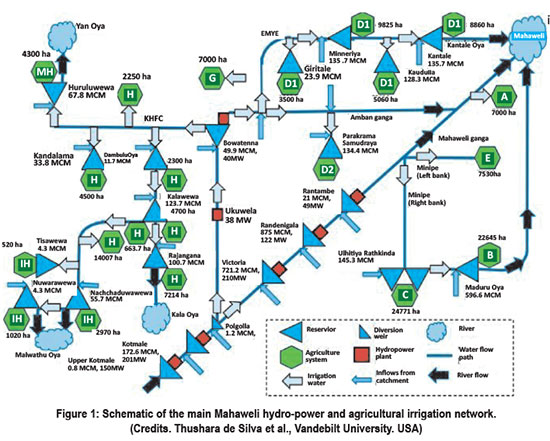 The largest drain on Sri Lanka’s foreign exchange earnings is in purchasing fossil fuels for power and transport, and in feeding the 22 million people who depend on a mere million hectares of arable land, as compared to 44 million hectares in Canada with a population of just 37 million. Much of agricultural land in the ‘dry zone’ depends on irrigation water. This is provided by a network of reservoirs that tap the heavy rains of the hill country to deliver water to the agricultural regions via rivers and irrigation canals.

In previous articles (The Island 7-Aug-2021, Island: https://island.lk/clean-energy-without-foreign-exchange/; Colombo Telegraph: https://www.colombotelegraph.com/index.php/clean-practical-solutions-to-sri-lankas-energy-crisis/) I restated what I had stated in many articles extending back two decades, namely, that just by ‘cutting down evaporation’ from our hydro-electric tanks, we can boost our clean energy production to such an extent that the targets of 70 percent production of clean energy become possible. Here I point out the possibility of boosting power production even further by optimal partitioning of water between agriculture and hydro-power production, by shielding the water in the irrigation tanks from evaporation, and in not using water to control weeds in paddy fields.

In ancient times, small manually built tanks (‘weva’) supplied water to small hamlets (‘gama’) where people lived at a precarious subsistence level (see Prof. Siriweera’ study of ancient food security). The temple or Kovil was the only spiritual, cultural and educational resource. That ancient hydraulic system held pride of place in the ancient world. But it did not tap the heavy rainfall of the hill country. The total population sustained by the whole land even at its best times was probably less than today’s population in Colombo.

In contrast, today’s hydraulic system not only provides irrigation water, but also electricity that drives modern technologies, hospitals, electrified transport, and every aspect of daily life at levels of culture and leisure that were not available even to elites of ancient times.

Figure 1 shows how hydro-power stations (red squares) of the Mahaweli system are also associated with the various irrigation schemes (green hexagons) denoted by A, B, C, … H, MH, etc. The headwater of the Mahaweli is diverted at Pollgolla towards ‘the north’ via Bowatenna mainly for agriculture, while another branch supplies the Minipe agricultural regions via Randenigala and Rantambe power stations.

However, if more water is sent to irrigated agriculture, there is less available for power production. Agriculture needs water in large quantities at specific times, while power production uses water far more steadily. The water that is used for hydropower generation can be used in agriculture when stored downstream and released at the required time.

Figure 2 shows the monthly water use in the two planting seasons. The upstream reservoirs have to provide enough water to the irrigation reservoirs at a time, to be ready to supply irrigation water as soon as required. I find it sufficient to model the water-requirement by just two Gaussians, when analytic calculations can be done. We find that water requirement can be cut down by beyond a factor of two using two simple provisions:

(A) covering irrigation tanks by floats to prevent evaporation. This also prevents algae and water weeds, and improves the aquatic environment. The floats may also carry solar cells and be connected to the central grid using smart switching technologies that are now standard, even in small islands like Hawaii.

(B) Water is not used for weed control in paddy planting.

Instead, weeds should be controlled using safe herbicides like glyphosate. Given socio-political resistance to ‘chemicals’, entrenched in occult beliefs in ‘revelations by God Natha’, or due to baseless propaganda against ‘agro-chemicals’, the so-called ‘System Rice Intensification’ (SRI) methods may be used. SRI has been tested out in India and Madagascar. It is said to increase yields by over 30 percent; four to five tonnes per hectare instead of at most three tonnes per hectare obtained with reduced use of ‘chemical’ fertilizers, while also using 40 percent less water than conventional methods. If chemical fertilizers and humus are used together, the yields become eight to ten tonnes per hectare, with even less soil erosion. However, a pilot project to test a new idea is needed before extensive adoption.

The steps (A) and (B) or similar ideas are not included in the usual studies on optimizing water management in multipurpose reservoir systems even though quite complex models like RIBASIM, WEAP (Louckes and van Beek 2017), have been used by engineering researchers. Such models, though complex, are only as good as the ideas incorporated into them. Ideas can be tested more transparently using simpler analytic models of the sort used in theoretical physics.

There are also losses in seepage that are not included in standard engineering models, or in my calculations, as no simple engineering approach is currently available to reduce seepage from the bottom of the reservoirs.

All this suggests that if reservoir capacity permits, the water available for hydroelectricity can be easily doubled while providing more than adequate irrigation water to the agricultural schemes of Lanka and providing all the needed power using only hydropower, for at least the next decade. If so much water can be saved, it makes good sense to expand reservoir capacity or bring into service the abandoned small tanks that are found in many parts of the dry zone, but they too will need evaporation shields. Furthermore, the possibility of raising the Kothmale dam to increase capacity by 20 percent has been proposed by Engineer Kenderagama (November 5, 2020, Island newspaper). If this is in fact feasible, the hydropower output will also increase by almost 20 percent. Thus we see that the lack of a ‘power research institute’ similar to, say, the Tea Research Institute (TRI) for the tea sector, hampers the evaluation and analysis of new ideas in such a vital national endeavour like power production, as the Ceylon Electricity Board (CEB) alone is not equipped to deal with such matters.

The projections of power needed by Sri Lanka given by the CEB are incorrect and are a gross underestimation as the CEB does not seem to have considered that most motor vehicles will use electric power within a decade.

In any case, the proposed steps are a means of establishing a solid shield against global warming and persistent drought that will be part of the future weather patterns. Then the mechanisms put in to prevent evaporation or deal with sudden excess water will become ‘God Sent’ provisions.

Checks and Balances of Quarantine Law