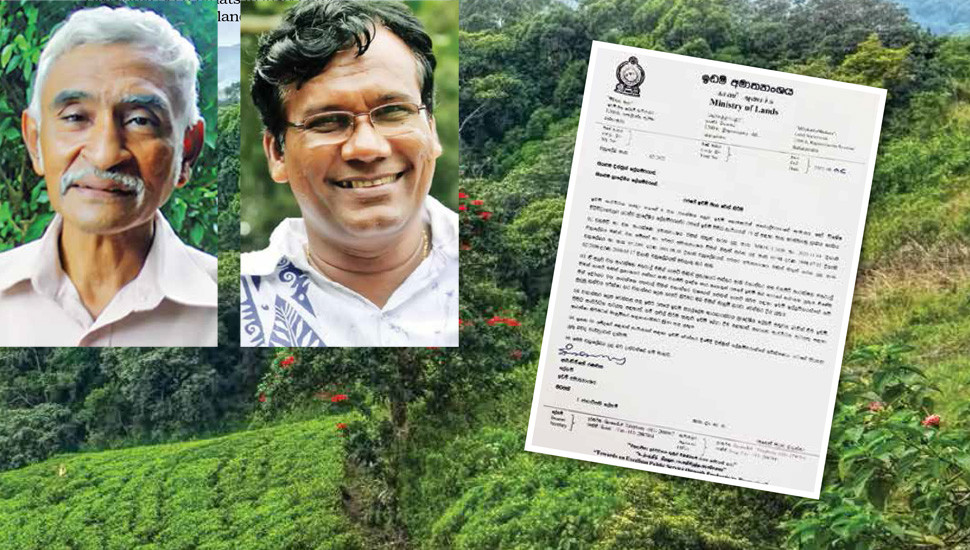 There has been a persistent outcry from environmentalists against the circular 02/2021 issued by the Secretary to the Ministry of Land to demarcate State lands on the basis that the implementation of this circular would result in over 500,000 hectares of forest land being at risk.

The Collective of State Trade Unions for the Environment comprising trade unions from the Department of Wildlife Conservation, Department of Forest Conservation and the Central Environmental Authority stated that this circular has been issued without any understanding of the impact on the ecosystems and biodiversity of such forest areas. They further emphasised that the circular in itself is in contradiction to the Constitution and the National Policy Framework Vistas of Prosperity and Splendour which seeks to increase the national forest cover by 30 per cent.

Why should OSF be protected?

Member of the Union, Dr. Wasantha Liyanage stated that the destruction of over 500,000 hectares of forest land would have a direct impact on the supply of oxygen, adding that felling of trees removs the ability to absorb existing carbon dioxide. Forests are also used to maintain natural cycles including carbon cycles, nutrient cycle, food systems, climate control, land slide control etc.

He added that OSF also plays a major role in reducing the risk of landslides. Dr. Liyanage added that although the MWFC/1/2020 circular previously issued by the Secretary of the Ministry of Wildlife and Forest Conservation by which the direct control of land considered as State forests is transferred from the Forest Department to District Secretariats and Divisional Secretariats mainly for economic and development purposes was criticised, this former circular at least provided a list of over 10 environmentally sensitive areas, including catchment areas, areas with historic or archaeological value or Elephant Corridors which will be excluded from this circular considering the negative impact that it would have on the environment.

He added that the current 02/2021 circular which is issued in reference to the MWFC/1/2020 circular however does not specify the exclusion of such environmentally sensitive areas, which makes it appear as though such areas will also fall under the purview of the District and Divisional Secretariats. Member of the CEA environmental trade union, Ajith Ranawaka stated that upon this destruction of these forest land for development prospects, replanting will not in any manner provide the natural benefits that are accrued by the existing forest cover, adding that thereby it is crucial to protect the existing forest cover instead of formulating less effective alternatives which include replanting of trees.

He added that the main threat by the implementation of this circular would be to the forest areas in the dry zone, as there are several forest lands that are yet to be gazetted and are considered as OSF. While there is minimal rainfall in the dry zone, the destruction of these forest areas will further impact rainfall, which would in turn directly impact crop production.

Ranawaka further said this circular would also adversely affect mangroves, which are of great importance and are already under threat, adding that this circular has been issued without the consent of the Ministry of Environment and other relevant authorities. The authority vested in the District and Divisional Secretariats and its impact on the forest land The third point of the circular further states that “if the Forest Conservator General requires to Gazette certain land as forest land, District and Divisional Secretariats should inspect the suitability of the area and should survey such area and reserve such land to be Gazetted as forests.” The statement “inspect its suitability” is ambiguous as generally, an area declared under these three Acts are so declared in consideration of its unique value, the trade unions questioned as to the capacity of the District and Divisional Secretariats to inspect the suitability of forest land.

The factors that have to be taken into consideration includes studies on the biodiversity, water resources as well as its environmental services carried out by State entities, Universities and Environmental Non-Governmental Organisations, Dr. Gunawardana stressed. He added that this circular will result in both the officials of the Department of Forest Conservation and District and Divisional Secretariats facing several difficulties.

Senior Advisor to the Centre for Environmental Justice (CEJ), Hemantha Withanage said District and Divisional Secretaries do not have background knowledge to inspect the suitability of a land that is to be declared as forests, adding that there is a persistent risk that this circular would be used by several other parties for their individual benefit.

This circular issued by the Secretary to the Ministry of Wildlife and Forest Conservation repeals circular 05/98 issued in 1998 limiting the size of forest land managed by the Divisional Secretariats and subsequent circulars 05/2001 which authorises the management of all other forest land to the Conservator General of forests and Circular 02/2006 which allows the Conservator General of Forests to release land for non-forest related purposes.

While this circular in itself was severely criticised for its ambiguity and the impact on the environment by way of its implementation, Withanage said this circular will allow releasing forest lands for non-forest uses subject to selected ad-hoc guidelines.

He added that although the Secretary has the power to cancel the previous circulars, the new law does not provide provisions to release the “other forests” for the intended purposes and that Government Agencies such as the Ministry of Wildlife and Forest Conservation manages forests as a trustee and have no right to utilise such land without a clear scientific approach and public consent.

Further, CEJ stated the circular has been issued without understanding the available laws, amendments and the mandate of the issuing officer. Section 1 and 2 of the circular refers to the types of land covered under this circular as “residual forests,” adding that the use of such a term is misleading, as there is nothing about residual forests in the Forest Ordinance He further said according to the circular, the Secretary states that the forest lands will be used for economic or other productive purposes which means that the type of forests which the Secretary is willing to dispose under its circular requires an Environmental Impact Assessment (EIA) under the National Environmental Act No. 56 of 1988 as amended.

Therefore, the release of forest lands is already governed under the Forest Ordinance and utilisation of land located within a mile of national reserves declared under the Fauna and Flora Protection Ordinance requires one to the follow the EIA process.

In reference to the environmental impact that could arise as a result of the implementation of the circular, the Centre for Environmental Justice (CEJ) noted that the guidelines have been given without fully understanding the purpose of forest ecosystems, how the ecosystem works or that forests are there for the common good and should be protected for balancing the fragile ecosystems for the millions of known and unknown species, considering the earth balance, earth systems and ecosystems.

Thereby, the trade unions pledged to continue expressing their displeasure over the current 02/2021 circular including by means of filing a petition against the circular, in consideration of its impact on the environment, stating that development could take place without risking fragile ecosystems.