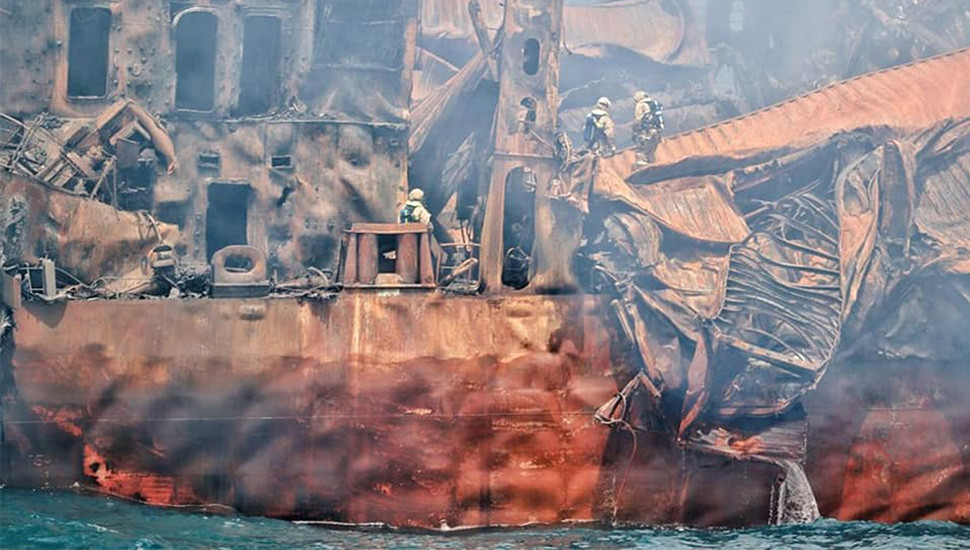 The Sri Lanka Ports Authority (SLPA) said they were awaiting confirmation as to whether the bunker oil of the wrecked feeder ship X-Press Pearl that sank 9.5 nautical miles off Colombo Harbour on 2 June has burnt out during the distress period or whether it is intact in the deck of the ship.

According to the SLPA spokesperson, nothing has been officially confirmed however, there is a major suspicion the ship fuel of 322MT is burnt along with the ship during the 11 days of fire on board the ship.

Meanwhile, the X-Press Feeders, operators of the wrecked ship said the situation on the scene remains under observation with no signs of debris or of fuel oil pollution and the marine chemist continues to take readings of the air around the vessel and test water samples to ensure the site’s safety.

They are currently being interviewed by local police on the continued investigations on the disaster. In their official statement, they added that the ship’s aft portion remains on the seabed at a depth of about 21 metres, and the forward section remains afloat and is reported as stable. According to the operators of the ship, the salvors remain on the scene to deal with any possible debris supported by the Sri Lankan Navy and the Indian Coast Guard, who have oil spill response capabilities on standby.

Ashore representatives of ITOPF and Oil Spill Response are monitoring updates from the scene and remain on standby to be deployed in case of any reported spill. They are coordinating with MEPA and the Sri Lankan Navy on an established plan to deal with any possible spill of oil and other pollutants.

“The shoreline cleanup is ongoing, and we remain committed to contributing earth movers to assist. We thank MEPA and the Sri Lankan Navy for their efforts during this lockdown in Sri Lanka, and they will further guide us on what assistance is needed and how we can provide it,” they added.