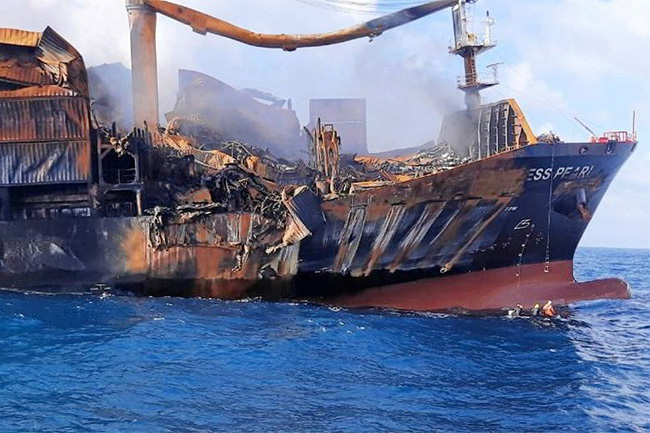 The salvor reports have confirmed that no bunker fuel remains onboard the X-Press Pearl, the Marine Environment Protection Authority (MEPA) announced today.

The Singapore-registered container ship was carrying 300 metric tons of bunker fuel at the time of the ill-fated incident.

“We have given written instructions to both the vessel’s owners and the salvage company to investigate and report back to us whether there was bunker oil still remaining in its tanks,” MEPA Chairperson Darshani Lahandapura said.

Both the salvage master and international oil spill expert International Tanker Owners Pollution Federation (ITOPF) have stated in their reports that according to factors such as the intensity, duration and temperature of the blaze, there may not be any bunker oil left onboard, she added.

Meanwhile, State Minister of Urban Development and Coast Conservation Dr. Nalaka Godahewa said the United Nations and the European Union experts are on their way to assist Sri Lanka in properly assessing the full extent of the environmental damages caused by the cargo ship fire.

“Through discussions, we have understood that the expertise that we have within the country is not sufficient to accurately calculate the damage.”

Accordingly, the support of the United Nations and the European Union was sought through the Ministry of Foreign Affairs, the state minister explained.

Speaking on how Sri Lanka plans to prepare itself to prevent any future calamities of this nature, Dr. Godahewa said several countries have already volunteered to held the island nation to develop its own capabilities through material and technical assistance.