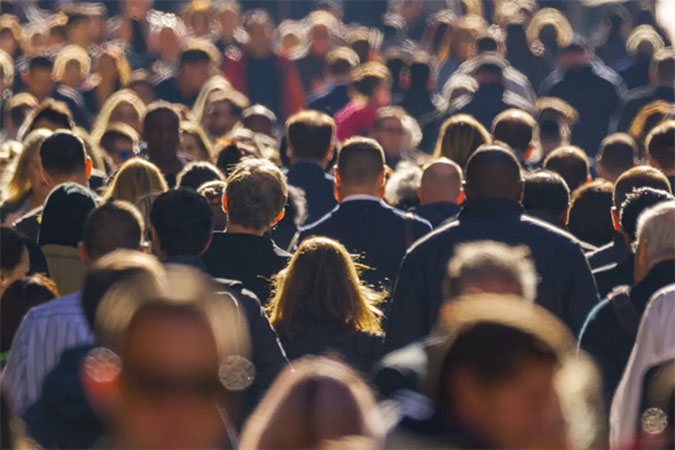 The report says more than half the projected increase in population up to 2050 will be concentrated in just eight countries.
The United Nations has estimated that the world’s population will reach eight billion by November 15. It has further said in a report that India will replace China as the world’s most populous nation in 2023.The projection was revealed in UN World Population Prospects 2022 released on World Population Day on July 11 this year but is gaining traction now as the projected deadline is just days away. The agency also stated that the global population growth fell below one per cent in 2020 for the first time since 1950.

The report said that more than half the projected increase in population up to 2050 will be concentrated in just eight countries: Congo, Egypt, Ethiopia, India, Nigeria, Pakistan, the Philippines and Tanzania.According to the most recent UN estimates, the population of the world could increase to about 8.5 billion people in 2030, 9.7 billion in 2050, and then peak at about 10.4 billion during the 2080s and is expected to stay at that level till 2100.

The majority of sub-Saharan African nations, as well as some regions of Asia, Latin America, and the Caribbean, have experienced a “demographic dividend” as a result of recent fertility declines. This increase in the proportion of the working age population (ages 25 to 64) presents an opportunity for accelerated economic growth per capita.

“This is an occasion to celebrate our diversity, recognize our common humanity, and marvel at advancements in health that have extended lifespans and dramatically reduced maternal and child mortality rates,” UN Secretary-General Antonio Guterres is quoted as saying in the report.

The UN Secretary General also shed light on the responsibility of sustainability and sustainable goals. “At the same time, it is a reminder of our shared responsibility to care for our planet and a moment to reflect on where we still fall short of our commitments to one another,” he continued.A separate report by the UN said: It’s a milestone we can celebrate, and an occasion to reflect: How can we create a world in which all 8 billion of us can thrive?

The growth of our population is a testament to humanity’s achievements, including reductions in poverty and gender inequality, advancements in health care, and expanded access to education. These have resulted in more women surviving childbirth, more children surviving their early years, and longer, healthier lifespans, decade after decade.

Looking beyond the averages, at the populations of countries and regions, the picture is much more nuanced – and quickly takes us beyond the numbers themselves. Stark disparities in life expectancy point to unequal access to health care, opportunities and resources, and unequal burdens of violence, conflict, poverty and ill health.

Birth rates vary from country to country, with some populations still growing fast, others beginning to shrink. But underlying these trends, whichever way they point, is a widespread lack of choice. Discrimination, poverty and crisis – as well as coercive policies that violate the reproductive rights of women and girls – put sexual and reproductive health care and information, including contraception and sex education, out of reach for far too many people.

We face serious challenges as a global community, including the mounting impacts of climate change, ongoing conflicts and forced displacement. To meet them, we need resilient countries and communities. And that means investing in people and making our societies inclusive, so that everyone is afforded a quality of life that allows them to thrive in our changing world.

To build demographic resilience, we need to invest in better infrastructure, education and health care, and ensure access to sexual and reproductive health and rights. We need to systematically remove the barriers – based on gender, race, disability, sexual orientation or migration status – that prevent people from accessing the services and opportunities they need to thrive.

We need to rethink models of economic growth and development that have led to overconsumption and fuelled violence, exploitation, environmental degradation and climate change, and we need to ensure that the poorest countries – which did not create these problems, yet bear the brunt of their impacts – have the resources to build the resilience and well-being of their growing populations.

We need to understand and anticipate demographic trends, so that governments can make informed policies and resource allocations to equip their populations with the right skills, tools and opportunities.

But while demographic trends can help guide the policy choices we make as societies, there are other choices – including if and when to have children – that policy cannot dictate, because they belong to each individual.

This right to bodily autonomy underlies the full range of our human rights, forming a foundation for resilient, inclusive and thriving societies that can meet the challenges of our world. When our bodies and futures are our own, we are #8BillionStrong.