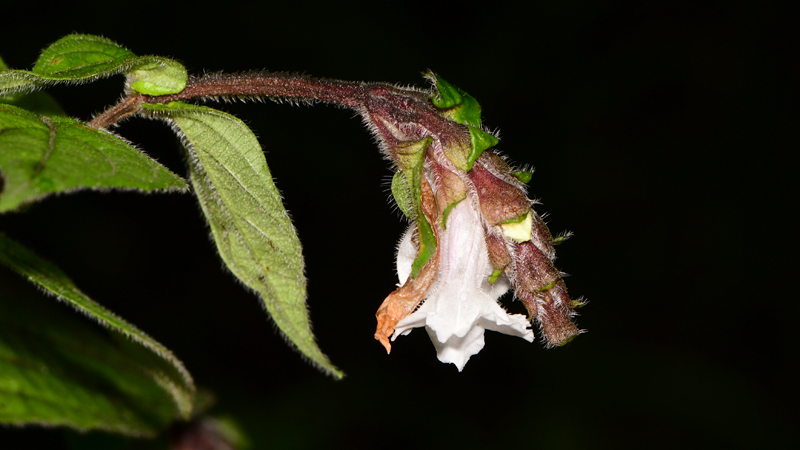 A new species of Strobilanthes is found from Sri Lanka. It is named Strobilanthesmedahinnensis Nilanthi as it is first recorded from Medahinna, Sripada (Adam’s Peak) on August 10. This is the first record of Sri Lankan author describing new Nelu species and a great achievement as the journal selected image of the new plant as the cover page of the journal. The Research Group includes Nilanthi Rajapakse, Nuwan Jayawardena from the Department of Wildlife Conservation, Prof. Siril Wijesundara from the National Institute of Fundamental Studies, Prof. Pradeepa Bandaranayake, Hiruna Samarakoon from the University of Peradeniya.

The Genus Strobilanthes BLUME belongs to the family Acanthaceae, first described by Blume in 1826 from specimens collected in WestJava, which is one of the largest genera in Sri Lanka and most interesting for its diversified habits, gregarious occurrence and elegant flowering.

The lifecycle of Strobilanthes is very interesting. The most plant takes about 8-12 years to grow from a seedling to a mature flowering stage. It flowers only once in its lifetime, sets seeds and then dies. Since Strobilanthes dominates the understorey, the forest takes on a spectacular appearance of bluish mauve when it is in gregarious bloom. Strobilanthes fruits rupture with a loud noise at the time they shed their seeds.

Very soon these seeds are germinated and seedlings of the next generation of Nelu were seen on the forest floor. These seedlings grow very close to each other and for a few years, the forest floor takes on the appearance of a green carpet, but when the seedlings become trees the forest interior is very difficult to penetrate. It has established thick undergrowth while becoming the dominant member of it. Finally, after some years the mature Strobilenthes will flower and then set seed, and this cycle of changes will be repeated over again.

After the blooming, the old Strobilanthes trees die by disseminating the seeds over the plain and dried Nelu branches fall on the forest ground. Meantime, new Strobilanthes plants grow; species such as Coleus spp. and Impatiens spp. grow in the undergrowth and complete their lifespan. Since Strobilanthes flowers bloom only once in their lifespan these trees die subsequently, thereby making opportunity for the young plants of “Damba”, “Keena” and “Mihiriya” which constitute the undergrowth of the forests to grow high, due to the disturbance caused to the permanent undergrowth with the sudden baring of the forest lands without undergrowth vegetation.

During the plant explorations at Peak Wilderness Nature Reserve in September 2015, the lead author Botanist as well as Molecular Biologist, Nilanthi Rajapakse found an interesting Strobilanthesplant at Medahinna, Peak Wilderness Nature Reserve. The new species is somewhat similar to S. anceps but differs by having a rounded stem, elongated spikes and distinguished bracts. According to morphological and molecular evidence, it could not be assigned to any previously published species; hence it was described as a new species.

Most Nelu species have anti-inflammatory, antimicrobial, and diabetic and anticancer and wound healing properties. Extract of some species of Strobilanthes has been commonly used to treat infections by a respiratory virus, such as inﬂuenza viruses, hepatitis B virus, mumps virus, and severe acute respiratory syndrome (SARS), coronavirus and are used in spider poisoning, snake bites, cerebrospinal meningitis, viral pneumonia etc. Leaf extraction of this species is generally used for the production of indigo dyes.

Nelu species grow from 100 m up to 2800 m. Lowland wet zone, Dry zone, Intermediate zone, Montane and sub Montane zones but the collection localities for the new Nelu species is restricted to an undisturbed evergreen rain forest at a high altitude below1500 m in a wet zone.

If anyone is interested in Nelu in detail you can order a detailed guide authored by Nilanthi Rajapakse from the Department of Wildlife Conservation, 285 paged, detailed descriptions of 33 species of Strobilanthesin SL with several pages allocated for each species giving their habitats and localities, conservation status, habit, taxonomic descriptions, superlative photographs and meticulously illustrated line drawings of the plant parts together with exquisite scanning electron micrographs of their pollen with beautiful ornamentation and its accompanying pocket field guide.