MV X-Press Pearl wreck to be dealt with post-monsoon 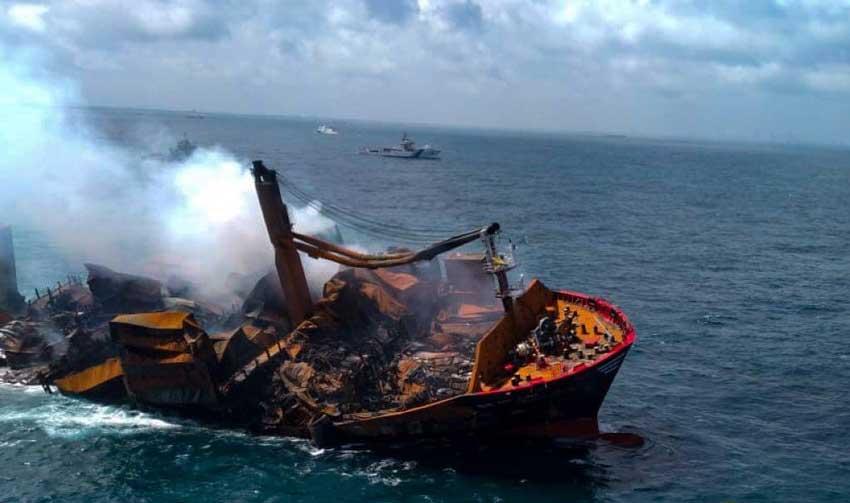 The Salvors appointed by the operators of the wrecked MV X-Press Pearl container ship has advised the Government, that the removal of the vessel should be undertaken in calmer sea condition post-monsoon, State Minister of Urban Development and Coast Conservation Dr Nalaka Godahewa said yesterday.

The Singaporean flagged MV X-Press Pearl caught fire and sank 10 nautical miles off the Colombo Port, as the Salvors attempted to tow the fire-stricken vessel following a multinational effort to douse the flames over several days. The vessel has partially settled at a depth of 21 m in the Colombo anchorage.

Addressing a special press conference, MP Godahewa said that the Salvors have appointed a caretaker company to manage the wreck till it is removed. Earlier this month Harbour Master Capt. Nirmal Silva stated that the vessel may have to be re-floated and towed or cut into segments and removed based on a full assessment by salvage experts.

According to MP Godahewa, the Government has already lodged an interim claim of $ 40 million with the owners of the vessel. The interim claim only covers the cost of the first 10 days of the disaster. He stated that the Government has identified that there was a lack of expertise locally to assess the damage to the environment, the economy and the long-term impact of it. “We have identified that we do not have adequate expertise in-country,” Godahewa said.

MP Godahewa told the press that a three-member group of experts from an UN-affiliated organisation is expected to arrive today and will include experts who will assist in assessing the environmental and economic impact of the incident. Local experts have called the incident “possibly the worse maritime environmental disaster the nation has faced, up-to-date”.

The Criminal Investigation Department (CID) has launched a criminal investigation into the incident and arrested the wrecked vessel’s Captain. Captain Tyutkalo Vitaly, a Russian national, was granted bail by the Colombo High Court on Monday, and the courts also issued a travel ban against him. The Center for Environmental Justice (CEJ) and a group of fishermen have logged Fundamental Rights petitions in Supreme Court citing the disaster.

Responding to a question on the lack of preparedness for maritime incidents and pollution control, MP Godahewa acknowledged that Sri Lanka has been poorly prepared to face such incidents.

“It is a fact that we are not fully equipped to handle a disaster on our own. We depend a lot on neighbouring countries for assistance. There have been plans and requests but I think, probably due to our economic situation the full requirements have not been made available,” MP Godahewa stated, adding that the Government plans to make budgetary allocations to fill capability and capacity gaps soon. He also said that the Foreign Ministry has reached out to several friendly countries seeking assistance to improve response capabilities, with several countries indicating a willingness to help.

Both MP Godahewa and Lahandapura stressed that there was no evidence of an oil leak from the wreck. According to Lahandapura, MEPA collects seawater samples from the site each day and results are yet to indicate contamination by oil.

“Our main concern is the bunker fuel; we estimate that there was nearly 300 MT of it onboard. However, the Salvors have officially told us there is a strong possibility that most of it was burnt off during the fire. This has to be verified,” the MEPA Chairperson said, adding that local authorities had placed oil spill containment assents close to the site to respond if needed.

The immediate need is to remove as much of the plastic nurdles which were on board the MV X-Press Pearl from the ocean and beaches around the Island, Dr. Jasinghe said, pointing out that coastal clean-up efforts spearheaded by the armed forces had removed nearly 1,000 tons of debris which were being kept in storage.

Dr. Jasinghe said that the Government is consulting foreign countries and groups that have responded to similar marine pollution events involving plastic nurdles to better formulate a response. “A key concern is the plastic and other hazardous debris in the seabed,” Dr. Jasinghe opined, pointing out that most of the plastics that pollute the water bodies and the ocean come from cities and industry. He stated that any coastal clean-up should involve industries and manufacturers that contribute to plastic pollution, directly or indirectly, calling on them to utilise their resources and funds to assist the efforts. Minister Godahewa said that the Government alone could not conduct the monumental task of cleaning up plastic and other pollutants from the coastline. He said that that the State plans to seek the public’s support, post-COVID-19 travel restrictions, to conduct islandwide beach clean-up operation and called on the public to volunteer to keep Sri Lanka pollution-free.

Sri Lanka included in research project on chemical fertilizer use