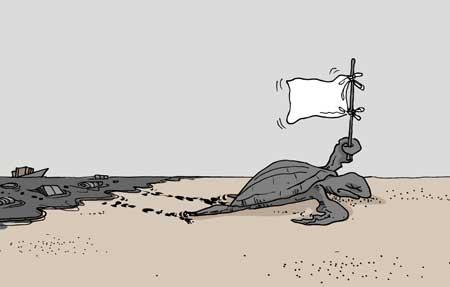 It is sad indeed to contemplate the tragedy that befell the turtles and other much-loved marine species such as dolphins and whales in the catastrophic aftermath of the blazing inferno on board the MV X-Press Pearl. As of last week, 176 turtles, 20 dolphins and four whales had been washed ashore in various parts of the country.

Endorsing a habit, well known among politicians to jump into unwarranted conclusions even when facts are staring them in the face, three ministers for reasons best known to them were quoted as having said that the washing ashore of the dead marine species was nothing unusual during the monsoonal period.

When asked about this unusual phenomenon, one of the ministers claimed that the pictures of the dead marine creatures had been taken from the internet. Another minister said this was common during certain times of the year and can in no way be linked to the debris from the debilitated vessel, while the other said that dead turtles turn up every year during this season and that past statistics needed to be checked to find out whether there had been any increase in the numbers.

It is against this backdrop that the Expert Committee appointed by the Marine Environment Protection Authority (MEPA) has revealed that the deaths of the turtles and other marine species reported in recent weeks were a result of the environmental damage caused by the fire onboard the chemical cargo carrier, MV X-PressPearl.

Meanwhile, a weekend newspaper reported that government authorities were not releasing the report on its investigations so as to avoid hindering the court case against the owners of MV X-Press Pearl with Marine Environmentalist Prasanna Weerakkody saying, priority should have been to minimize the environmental damage instead of focusing on the case for compensation.

He said the efforts to rescue the marine species would have been more effective if the authorities had released vital evidence on the toxic chemicals on board the stricken vessel. Mr. Weerakkody said among the carcasses were several varieties of turtles in addition to striped dolphins and Melon-headed whales. They were all suspected to have died from acid burns, asphyxiation and the intake of other harmful chemicals.

According to the media report, the Biodiversity Research Circle organization (BRCO) had reportedly emailed President Gotabaya Rajapaksa and Environment Minister Mahinda Amaraweera three weeks ago to express concern about the inadequacy of the postmortem investigations on the carcasses of the marine species, but so far had received no response. BRCO convener Supun Lahiru Prakash claimed that the Wildlife Veterinary Unit and the Government Analyst’s Department lacked adequate laboratory facilities to carry out tests. He pointed out that if the cause of death of the marine creatures was not properly determined, the case for compensation filed by the government against the MV X-Press Pearl’s owners and the skipper would fall flat.

Be that as it may, when asked whether there could be any truth in what some ministers said about the washing ashore of the marine species, Conservation Biologist Dr. Ranil P. Nanayakkara, a member of the IUCN/SSC Sirenia Specialist Group and co-Founder/principle scientist at Biodiversity Education and Research (BEaR) had reportedly said that during rough seas, marine creatures tend to be washed ashore, but not to this degree. He said if there were this many turtles and dolphins being washed ashore, they would soon become extinct and as such what happened in the aftermath of the blazing inferno was not connected to the monsoon or high tides.

“Sri Lanka doesn’t have baseline information to compare what the marine environment was like before the incident happened. Information on ocean currents, the pattern and other details are vital to study the impact of the damage,” he said. “During June, July and August you can see more turtles, dolphins and whales washed ashore, but they may have died elsewhere. Initially near-shore species such as humpback dolphins and spinner dolphins were seen but now oceanic species such as dwarf sperm whale carcasses too have been found. This means the effect is washing around and spreading to the deeper seas as well.”

We conclude this column by asking, as we have often asked before, whether there is no one responsible for letting this stricken vessel enter Sri Lanka’s territorial waters. An equally important matter is whether there has been any progress made on the demand for compensation for the massive calamity that descended on Sri Lanka and underscore the need for compensation, if and when received, to be fairly and equitably distributed among those affected.

Wildlife and forest conservation to be included in school curriculum