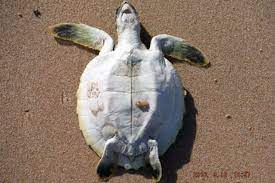 The Singapore-registered MV X-Press Pearl was carrying hundreds of tons of chemicals and plastics when it caught fire last month, before burning for two weeks. Since 2 June its wreckage has been partially submerged off the capital Colombo.

Wildlife officials said the carcass of an Olive Ridley turtle – a species listed as threatened by the International Union for Conservation of Nature – was found at the tourist resort area of Bentara, 80 kilometres south of Colombo.

Another was seen on a beach in Induruwa, just south of Bentara, raising to 15 the number found in the southern tourist resort belt, an official said.

“We see a clear link with the ship and the turtle deaths,” the senior wildlife official on the island’s south told AFP, declining to be named.

He said the disaster struck during the height of the turtles’ mating season.

It is not unusual for some turtles to suffocate and die during the mating season, but deaths this year were “10 to 20 times more compared to last year,” he said.

Local media reports have said more than 50 turtles and eight dolphins have been found dead across the island since the ship caught fire on 20 May.

As the fire spread, two explosions dumped several containers into the Indian Ocean, along with plastic pellets which blanketed nearby beaches.

The country’s top environment official, Anil Jasinghe, on Thursday linked the deaths to the X-Press Pearl, but said he was still waiting for final autopsy reports.

About 1,200 tons of plastic pellets and other debris scooped from beaches are being stored in 45 shipping containers, officials said.

Sri Lanka is seeking $ 40 million in damages from the ship’s operator, X-Press Feeders.

Environmentalists are suing the Government and X-Press Feeders for allegedly failing to prevent what they have called Sri Lanka’s worst marine environmental disaster, while Sri Lankan Police have launched a criminal probe against the ship’s Captain, Chief Engineer and Chief Officer.