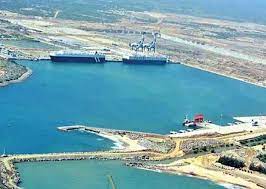 ECONOMYNEXT – A minor oil spill at the Hambantota International Port in Sri Lanka has been brought under control and the country’s Marine Environment Protection Authority (MEPA) has lodged a complaint with the police, an official said.

MEPA Chairperson Dharshani Lahandapura said facts pertaining to the spill have been presented to the Hambantota magistrate.

The spill occurred last Sunday (11) when a bunkering barge was refueling the Vishva Ekta, an Indian commercial vessel.

“It wasn’t a major spill. As per our observation, its 400 liters of oil spillage,” she said.

“We can disclose further details once we get the court order,” she added.

The Indian vessel had called with a tinker consignment.

“The spillage happened when it was pumping oil to the vessel. We don’t know the cause of it but we assume it was due to an issue in the vessel’s vas,” Lahandapura said.

Media reports said the vessel is in Sri Lankan custody until costs incurred are settled by its owners. (Colombo/Jul15/2021)