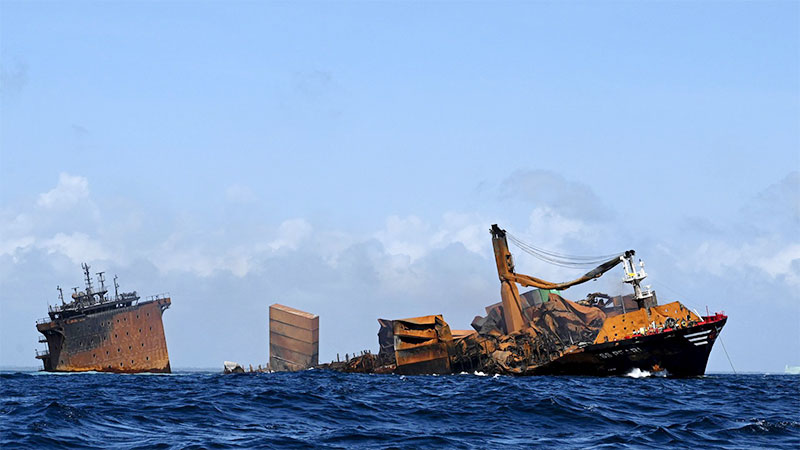 The Marine Environment Protection Authority (MEPA) yesterday (3) said that oil sheen has leaked from the wreck of the MV X-Press Pearl ship and that mechanical dispersion is currently being used to help in its speedy evaporation.

“This oil sheen is not a spill of the bunker oil contained in the ship. However, it is leaking from the ship and is continuing for about 1 nautical mile (approximately 1.9 kilometres) away from the ship. We are using the mechanical dispersion method to churn the waters so as to aid in the faster evaporation of the oil,” MEPA Chairperson Dharshani Lahandapura told The Morning yesterday.

Lahandapura said that depending on the type of oil and the severity of the oil spill, there are several accepted methods that are used to deal with such.

“However, since it is a thin sheen, we cannot collect it or dispose of it through the use of containment booms (floating, physical barriers to oil spills). We also cannot use chemicals since the use of chemicals at this stage would cause more harm. That is why we are using mechanical dispersants to remove the oil.”

She added that teams are sent on a daily basis to the site to collect samples for ongoing analytical tests to find the nature of the oil.

Commenting on the possibility of a bunker oil spill from the wreck, Lahandapura said that Oil Spill Response Limited (OSRL), an organisation appointed by the owners of the MV X-Press Pearl, have positioned oil spill prevention mechanisms such as containment booms very close to the wreck for immediate deployment.

Previously, a total of 11 environmentalists had appealed to President Gotabaya Rajapaksa last week to immediately intervene and stop the alleged ongoing oil pollution caused by the MV X-Press Pearl wreck and to immediately remove the toxic wreck and the chemicals in it from the Sri Lankan waters. They claimed that the private companies involved in the prevention of the oil spill “have not taken any steps to stop it.”

The MV X-Press Pearl ship caught fire on 20 May, approximately 9 nautical miles away from the Colombo Harbour, after having anchored there a few hours prior to the fire. A subsequent explosion on 24 May led to the fire spreading and a number of containers aboard it, falling into the sea, thus releasing pollutants including plastic pellets into the water. Reportedly, the ship had carried in its cargo about 25 tonnes of nitric acid, 300 metric tonnes (MT) of bunker oil and 78 MTs of plastic pellets or nurdles. Environmentalists have speculated that the plastic pellets could affect the country’s marine environment, including its beaches, for years to come.

Live with Covid as we do with Flu: Boris Johnson