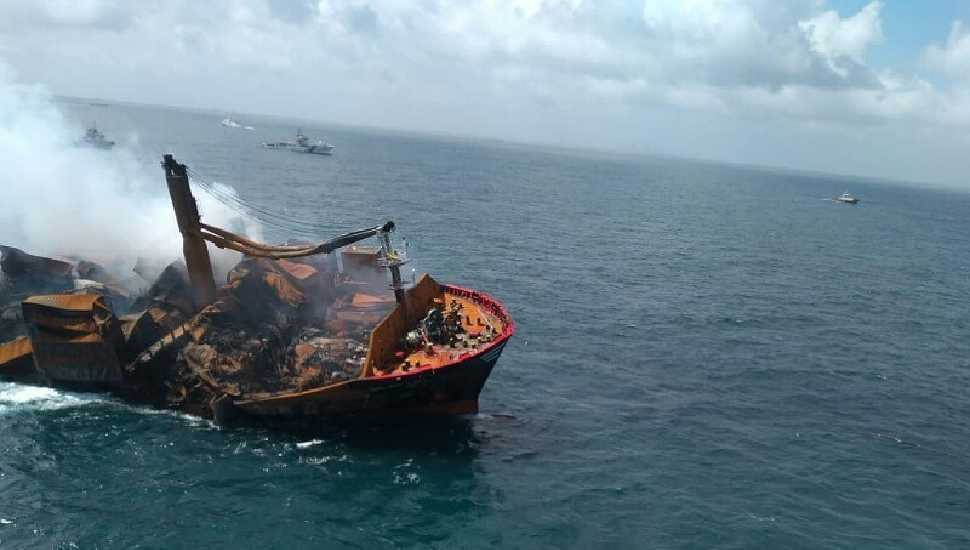 Efforts continue by marine experts, such as the National Aquatic Resources Research and Development Agency (NARA) and Marine Environment Protection Authority (MEPA), to mitigate the ocean and coastal pollution due to the fire and subsequent explosion of the X-Press Pearl cargo ship, which finally sank on Wednesday (3).

Initial reports have found no change in pH levels in the ocean and lagoon. “We are awaiting results on tests conducted on seabed species,” said State Minister of Fisheries, Kanchana Wijesekera, yesterday. He also said MEPA has formulated a strategic plan in case there is an oil spill from the sunken ship.

Booms and skimmers will be used around the vessel and strategic locations, and a spray will be used to disperse any potential oil slick. There are also contingency plans for full beach clean-ups, he tweeted. Meanwhile, Singapore’s Maritime and Port Authority (MPA), yesterday, announced that it aims to launch a probe into the charred X-Press Pearl containers in the water, as it may cause an environmental disaster. The sunken vessel is currently sitting on the ocean floor at 22 mt depth with the aft left to be visible, 9.5 km off Colombo Port, in Dickovita beach area.

The NARA has been monitoring and conducting tests on marine resources and coastline around the country impacted by the Singapore-flagged ship that caught fire on 20 May. The Indian Coast Guard is also monitoring the situation of the shipwreck site. Currently, India’s Samudra-class hightech Pollution Control Vessel (PCV), Samudra Prahari is on standby.

The other Pollution Response Vessel, Vaibhav is also engaged in this mission. Vessel Vajira has returned to India and will be on standby if there is an emergency call, the Indian sources said. RV ‘Samudrika,’ a research vessel from the NARA, operated by the Sri Lanka Navy Hydrographic Service (SLNHS) was deployed on 1 June to collect water and sediment samples from the sea area where the ship lies. It is revealed that there were 78 metric tonnes of plastic nurdles on board the ship.

The badly burnt ship, carrying charred containers on board was to be for about 30 mn to avoid further sea pollution on 2 June, but that plan was aborted as the ship began to sink. As the NARA and several other local authorities continue to coordinate a joint operation to mitigate the impact of the burnt ship to avoid further possible environmental damage, the Government, at the Media briefing, said certain factions are blaming it for the unfortunate incident.

Minister of Ports Rohitha Abeygunawardena said many are using the fire to attack the Government to gain political mileage and they have to tell the public what really happened. He said the ship fire was an “unfortunate” incident and there was nothing political about it. “Some claimed the Qatari and Indian ports had denied entry and we had granted permission, which is incorrect. The ship entered both ports and then carried their cargo as well and sailed to Colombo,” he added.

SLPA Chairman Daya Ratnayake reiterated that the adverse weather delayed dousing the fire. Between 24 and 26 May over 39 hours, the cyclonic condition hampered the mission of dousing the fire, he added. The Harbour Master added that as said before the ship arrived and the usual permit was granted after seeing the manifest or the list of cargo that was to be unloaded in Colombo, transshipment cargo, and transit cargo. The Harbour Master reiterated that they were not informed by the Captain of any issues on the ship prior to entering Sri Lankan waters. He said there were no explosive chemicals mentioned in the list that needed approval from the Defence Ministry.

The ship had arrived at midnight on 19 May and on 20 May afternoon there was smoke and later a fire, he added. He also said while in the anchorage, the ship Captain sent some pictures of the leak in the cargo, while they were working on the arrangements to call the ship to the terminal. These are normal, he said, which any ports attend to.

It’s part of the normal operation, where when such problems are brought up, it needs attention and service. Reworking is part of a normal operation, he added. He also added that they always follow the International Maritime Dangerous Goods (IMDG) code while loading and unloading the consignments.