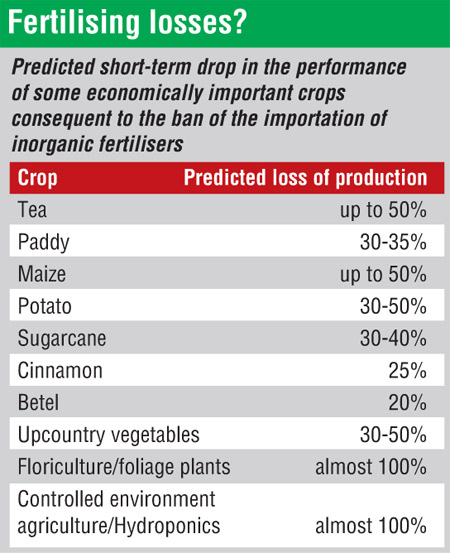 The group of 30 scientists and experts have informed President Gotabaya Rajapaksa on the substantial loss of production in a sample of select crops by the ban of inorganic fertiliser.

They said there were several crops such as nutmeg, cloves, vanilla and cardamom which had hardly undergone yield improvement by breeding for responsiveness to fertilisers. These crops are mainly grown in agroforestry systems where there is minimal use of inorganic fertilisers.

Such crops will be hardly affected by the ban and the impact on crops such as pepper, coffee and cocoa can be overcome by adding green manure, i.e., loppings of Glyricidia sepium, and on legumes such as cowpea, green gram, black grams and soybean by inoculation.

However, they said it could result in a considerable drop in yield for several very important crops by between 25% and almost 100% (see table) as most of them have been bred for high-input agriculture, including responsiveness to fertiliser.

Similar trends have already been observed in many parts of the world when inorganic fertilizers have been completely replaced with organic manure. Moreover, maize, sorghum and by-products of rice (i.e. bran) and coconut (i.e. poonac), etc. are used in silage making and animal feed production. Therefore, a drop in the production of such crops will also affect the quality and cost of animal feed, which in turn will affect the performance of the livestock and poultry sector.

“There is special concern about the potential impact on rice and tea, one a staple food and the other a very important foreign exchange earner of the country,” the scientists and experts warned.

“The latter faces fierce global competition, and our country has already lost part of its global market consequent to the ad hoc ban of the import and use of glyphosate in 2015 but rescinded in 2018. The country has not been able to regain the lost market (i.e., Rs. 15-20 billion) due to the stiff competition. Therefore, any impact, particularly on national tea production, will have far-reaching implications which are hard to reverse,” they added in their letter to President Rajapaksa.