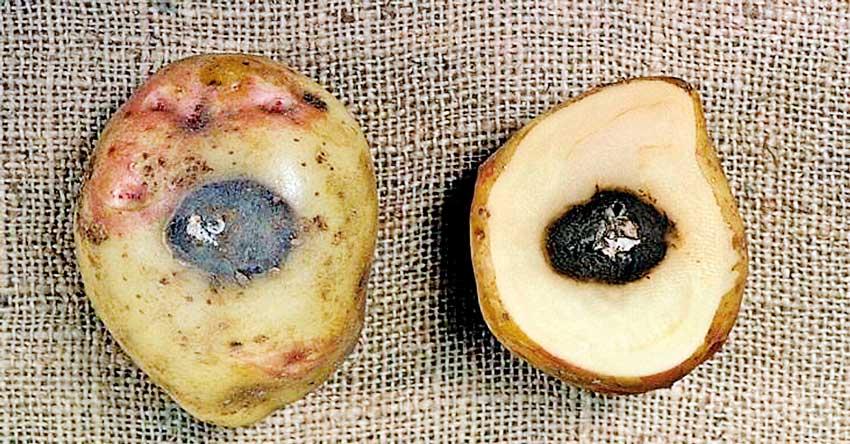 The company has produced an independent laboratory testing report obtained from Schutter Global Inspection and Survey Company Ltd. indicating that the samples do not carry Salmonella

Senior Lecturer in Soil Science in the Faculty of Agriculture at the Univerity of Peradeniya Dr.(Ms) Warsui Dandeniuya questions as to who is fooling whom in the import of Fertilizer claimed to be from seaweed.

The authorities who are importing these fertilizers claim that they are prepared from seaweeds, but this claim is far from the truth; because seaweed cannot contain the claimed nitrogen levels of 10-15 percent. Dr.Dandeniya also says that the bacterial group “Erwina” has not been reported in seawater.

Dr.Dandeniya says the bacterial genus Erwinia is commonly found in soil environments and in contaminated freshwater. However, Erwinia has not been reported in seawater because this bacterium cannot tolerate high salt concentrations. Further, the imported organic fertilizers are said to have 10-15 % total nitrogen levels. Authorities claim that these fertilizers are purely prepared from seaweeds. However, the presence of Erwinia, coliforms and high nitrogen levels indicate that this claim is far from the truth. This is because a fertilizer purely based on seaweed cannot contain this much of nitrogen and cannot have organisms that are not found in seawater. So, should we keep blind-folds and choose to be fooled?

Dr.Dandeniya says rich biodiversity in Sri Lanka is a wealth of the nation. In order to protect this biodiversity and safeguard the sensitive ecosystems, a number of measures has been taken in policy and regulatory framework over the past few decades. “We have enough experience of endangering eco-systems due to the spread of invasive plants and animals and disease-causing organisms introduced from other countries. Therefore, all imported materials that could serve as carriers of organisms are to be inspected by the National Plant Quarantine Service (NPQS), which is established under the Department of Agriculture.

With the recent decision of the Government to import organic fertilizers to the country Sri Lanka Standard Institute (SLSI) has prepared SLS 1704:2021 standards for the sterilized solid organic fertilizers. This Standard is subjected to the restrictions imposed under the Regulation of Fertilizer Act No. 69 of 1988, Fauna and Flora Protection Act No. 44 of 1964, Plant Protection Act No 35 of 1999, Food Act No. 26 of 1980, Animal Diseases Act, No. 59 of 1992, National Environmental Act No. 47 of 1980 and quarantine and prevention of diseases ordinance (chapter 222) and their amendments. According to the standards, the imported solid organic fertilizers should be free of any microorganisms. Therefore, when the National Fertilizer Secretariat (NFS) identifies foreign suppliers, they should request from NPQS to test the organic fertilizer samples imported from the identified suppliers for the presence of microorganisms before using the fertilizer in any subsequent field testing or releasing to the end-users in the country. These sterile organic fertilizers will become biologically active only after applying to the soil,” she said.

The much-debated organic fertilizer samples imported from China have been tested by NPQS on request of NFS following the protocols. “The test reports indicate that two bacterial genera, Erwinia and Bacillus, are present in some samples along with some Gram-positive and Gram-negative bacteria, which has not been identified. Therefore, clearly, the samples do not match with the SLS 1704:2021 standards and should not be allowed to enter to the country,” said the adamant Don of the University.

She said that the company has produced an independent laboratory testing report obtained from Schutter Global Inspection and Survey Company Ltd. indicating that the samples do not carry Salmonella. The report indicates that the coliform bacteria are present in less than 10 colony forming units per gram. Some authorities misinterpret this report as the fertilizer samples are free of microorganisms. This is totally incorrect.

Dr. Dandeniya says this because the report from the internationally accredited laboratory did not analyze the samples for plant pathogens or the total bacteria, fungi or viruses in the samples. Therefore, the absence of one genus of bacteria (i.e. Salmonella) does not mean the sample is free of organisms. Further, the coliform counts in their test report is not zero. This category includes Escherichia coli (E.coil) like bacteria which usually indicate contamination of samples with fecal matter.

Erwinia is a well-known notorious plant pathogen that causes severe postharvest losses in crops such as carrot, potato, onions, lettuce, cabbage and many other horticultural crops. It is the main threat to the floriculture industry as well. “They are the culprits of soft-rot we often see in vegetables purchased from the market. We should avoid the conditions that facilitate the spread of soft-rot disease, which include maintaining field sanitation, proper irrigation management and avoiding the use of organic fertilizers contaminated with Erwinia. In Sri Lanka, the postharvest loss of vegetable crops is already above 40%. In the present context, production is low due to complications with the present ban of fertilizers and COVID19 related restrictions. Under these circumstances, can we take the chance of increasing postharvest losses that would happen with the application of contaminated fertilizers? This risk assessment has not been done yet” she explained.

A claim far from the truth
The bacterial genus Erwinia is commonly found in soil environments and in contaminated fresh-water. However, Erwinia has not been reported in sea water because this bacterium cannot tolerate high salt concentrations. Further, the organic imported fertilizers are said to have 10-15 % total nitrogen levels. Authorities claim that these fertilizers are purely prepared from seaweeds. “However, the presence of Erwinia, coliforms and high nitrogen levels indicate that this claim is far from the truth. Because a fertilizer purely based on seaweed cannot contain this much of nitrogen and cannot have organisms that are not found in sea water. So should we keep blindfolds and choose to be fooled?” she queried.

“Some groups are attempting to bring this fertilizer by trying to change the condition in the SLS 1704:2021 standards from “free of any living organisms” to “free of any harmful living organisms”. But how can we define what is ‘harmful’? Except for a few known pathogenic organisms that we can clearly define as harmful the large majority of the microorganisms are difficult to define as to whether they are harmful or beneficial. Because of these two traits the majority of microorganisms are very relative and determined by how they interact with other organisms in a given environment. Some microorganisms can show invasive characters threatening biodiversity when newly introduced to an environment. Some of them can become emerging pathogens. Further, the laboratory testing done using culture-based techniques (as used by both laboratories of concern here) only gives us information related to less than 10% of the total microbial populations in these organic fertilizer samples. Therefore, it should be re-iterated that because of not seeing the microorganisms we have been looking for in the sample and that does not mean the sample is free from any microorganism. There can be many potential pathogens. Moreover, no one looked for the presence of viruses. In addition to Erwinia, the bacterial genus Bacillus and some other unidentified Gram-positive and Gram-negative bacteria have been reported in these fertilizer samples tested by NPQS. Bacillus is a big genus with hundreds of species that include disease causing microorganisms to plants, animals and humans,” said Dr. Dandeniya.

The region from where the seaweeds are cultivated to produce this fertilizer in China is known for heavy pollution of its ocean. “There can be many disease-causing and potentially harmful organisms entering with these fertilizers. They escape the analysis simply because they were not targeted by the techniques used. The potential harmfulness of the organisms found is also difficult to define because it is a trait influenced by how these organisms interact with others upon release as mentioned earlier.

“Should we pay millions of dollars and take this risk? Are we ready to accept the damage that would happen to our agricultural systems and environment at large? If we allow the import of contaminated fertilizers we should be ready to import chemicals to treat the diseases in plants, animal and humans and also to import food and feed to ensure food security in the future. Because the loss of productivity would be inevitable when the agro-ecosystem is damaged. May be we will have to pray China for many decades,” she said.