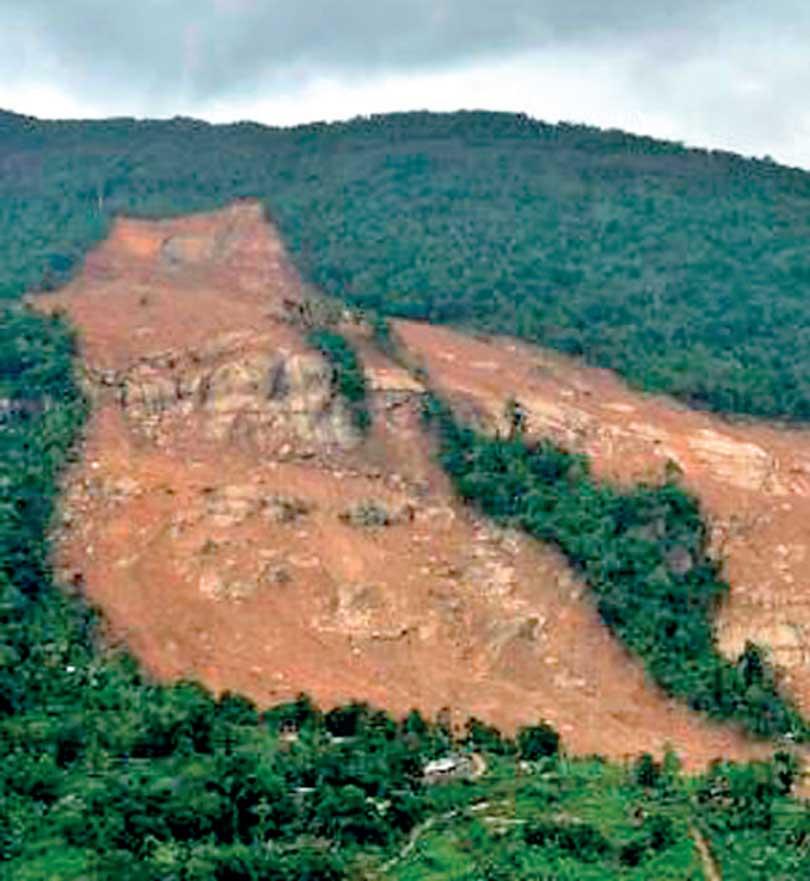 There is some sunshine falling through now, despite a grey sky. Whole of last week was about flash floods and landslides in most parts of the country. At the second reading of the budget, State Minister for Disaster Management Chamal Rajapaksa told parliament, during the past 10 months 106 people have died of “natural disasters”, while it was 65 the previous year.

A few days ago, while the sky was pouring heavy, on November 9, 2021, District Secretary of Kegalle announced four deaths due to a landslide in Dombemada in the Rambukkana area. The National Building Research Organisation (NBRO) had issued “Landslide Warning” valid for 24 hours from evening 4.00 pm on November 8, 2021. The warning said, “Since the rainfall within the past 24 hours has exceeded 150 mm, if the rains continue, evacuate to a safe location to avoid the risk of landslides, slope failures, rock falls, cutting failures and ground subsidence.”

Five months ago, in early June, 06 people died of landslides in Warakapola area, while level three evacuation alerts were announced for Kegalle, Ratnapura, Kalutara and Nuwara Eliya districts. Floods, landslides, and earth slips caused immence damage leaving over 270,000 people affected and around 22 dead during June 2021.
After last June floods, DMC Assistant Director for Kegalle told media they were conducting a survey and are marking landslide affected locations and laid all blame on people. Confirming landslide warnings issued by NBRO appealing people to vacate vulnerable areas he said, people are not being cautious following the warnings. The recent incident in Warakapola is the best example. They can’t undo what has already happened.

Before these two tragedies there were two massive landslides, one in 2014 October in Meeriyabedda, Koslanda in the Badulla district and the other in 2016 May in Aranayake in Kegalle district.

Most important information in it was that the NBRO has “initiated a programme to assess each landslide occurred in order to estimate the damage and the economic loss. The assessment was carried out for 38 landslide incident sites….” They claimed, “Information captured through the assessment will be provided to District Secretariats” to be used in post disaster activities. The tragic question is, “Have we?”

I do not subscribe to the argument that all these rapidly increasing landslides, earth slips, slope failures, rock falls, cutting failures and ground subsidence and also frequent flash floods are “natural disasters”. With unaccounted and unmitigated, politically patronised devastation of environment for greed of unaudited unlimited profit contributing to unending Global Warming and Climate Change, especially during the past four decades, floods and landslides are no more “just natural” phenomena.

As human responsibility, I would add illegal constructions and high scale constructions approved by corrupt LG bodies with no attention given to environmental factors as no small contribution for these tragedies, especially in and around densely populated urban and semi-urban mountainous areas.

Sadly, all these devastations to environment have continued unabated with every government and every year with the filthy rich entrenching themselves more and more in the decision-making political process. This therefore is the third time I am writing on possible solutions for landslide and flash flood tragedies since Koslanda got washed out seven years ago. I presume NBRO in particular by now have more and better surveyed maps of vulnerable areas than when I first wrote about solutions. These heavy flash floods and landslides as I see, are manmade chaos from otherwise nature’s random outbursts. It is therefore possible to manage them with minimum damage to people’s lives.

First is to accept, we have shaved the Central and Sabaragamuwa mountains almost bald, in anarchic fashion during the past three to four decades. Deforesting of these areas took place over a Century to establish commercial plantations and led to soil erosion that silted all major rivers. Soil erosion effected plantations as well and they thus had to innovate in controlling and managing soil erosion. Not necessarily, satisfactory and adequate.
Last two to three decades of accelerated denuding of mountainous land for increased, unplanned and ill-planned human activities keep adding to all disasters. There are large scale expansions of small-plot farming, both State and privately undertaken wide spread constructions, State sponsored village settlements leading to legal but ill-designed projects eating into forests and businessmen with local political patronage illegally deforesting mountainous areas. Landslides and flash floods thus come together.

These devastations have not been legally dealt with by the Central Environment Authority, the Wildlife and Forestry Departments and other relevant authorities. Impunity at its highest unquestioned level and everything leading to flash floods and landslides are increasingly happening. The NBRO and the DMC are left helpless in a politically corrupt setup and can only send out warnings with short notice for people to evacuate from “danger zones”.

Where can these people rush to with their families and belongings within 24 hours or so? Where are safety houses to provide shelter to these “environmental refugees”? And where can they go to after floods and landslides? We need permanent answers for them and to society. Sadly, with no environmental organisation or self-proclaimed environmentalists questioning the rationale of warning and blaming people and then allowing them to continue living in “danger zones”, not demanding permanent answers for these “manmade” tragedies, we continue with media outlets using these as “natural” tragedies to popularise their channels, collecting dry rations and essentials. And people running to “collecting centres” with whatever they could afford to offer to the “ill fated”.
This social mentality cultivated through corrupt politics and media, needs to change to demand permanent answers. We as “concerned citizens” need to demand a seriously thought out plan for relocating people and re-foresting denuded mountainous areas as priority. Planning for such “re-naturalising” of environment can and should begin with maps and data bases both DMC and NBRO have developed so far. Both relocation and reforesting are twin answers for flash floods down the rivers and for landslides, earth slips, rock falling and other disasters. Relocation and reforesting should be planned and implemented as a total package overseen by “People” of relevant Divisional Secretary areas.

Relocation does not mean providing “alternate” shelter. Residencies should include easy access to schools, health services and groceries, adequate transport and access to cultural activities with a guarantee for income generation opportunity. Employment or income generation should be supported with skills development programmes and a monthly allowance not below the national minimum wage till they are economically established or for one year.
Re-forestation is not mere planting of trees. Type of trees planted should be carefully selected. It is about creating new forests and therefore should be well defined with geological and botanical inputs. Most importantly, areas for re-forestations should be clearly demarcated with all human activities forbidden and kept under “community management” organised by LG bodies, but functioning independent of the LG administration.

These people-based programmes don’t come as State initiatives. They come as community initiatives. Therefore, the immediate need is a public campaign for people-oriented relocation and re-forestation in areas identified as “danger zones” by NBRO. Wonder whether environmental organisations would at least intervene in such campaigns without any further delay.