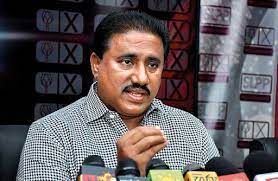 The Government is evaluating options for the removal of the ill-fated MV X-Press Pearl wreck, which has settled on the seabed off the Colombo Harbour, Harbour Master Capt. Nirmal Silva said yesterday.

The Government has been consulting salvors and the insurers of the container vessel on the options available to remove the wreck, Capt Silva said.

The vessel may be re-floated and towed or cut into segments and removed based on a full assessment by salvage experts, he explained, adding that it would take some time to reach a decision.

Addressing a special media conference on the fire-stricken container vessel, Capt. Silva said that it was suspected that most of the fuel oil on the board the vessel (suspected to have carried close to 300 MT) may have already been used up during the fire on-board, adding that experts held similar views.

The Harbour Master’s comments come in the wake of environmentalists expressing fears an oil spill from the vessel will compound damage to the marine ecosystem and coastal community of the island.

Last week Marine Environment Protection Authority (MEPA) labelled the incident as being “possibly the worse marine environmental disaster Sri Lanka has had to face”. Experts warn that it will take months to assess the full extent of the damage.

Capt. Silva stated that the specialist had to board the vessel and carry out a detailed inspection to establish the condition of the ship and ascertain if there is any oil left within the vessel.

“A full assessment has to be done, however up to now there hasn’t been an opportunity to board the vessel safely to conduct a detailed assessment,” Capt. Silva said.

Commenting on the concern of a potential oil spill from the wreck, Capt. Silva stated that the National Oil Spill Contingency Plan (NOSCOP) had been put into effect under the leadership of MEPA and all stakeholders and resources mobilised to contain any oil spill, adding that pollution control capability of salvors and the Indian Coast Guard were also on-site to assist. Many of the vessels stationed around the wreck carry oil dispersant chemicals which can be sprayed onto oil patches, Silva added.

“We knew there was little over 300 MT of oil on-board. It is the experts’ view that the oil would have burnt during the intense fire. However, we can’t confirm it yet. We have to look at the worst-case scenario. There is a possibility that there may be some (left),” Capt Silva said.

The Harbour Master pointed out that it had been nearly 36 hours (as of last afternoon) since the vessel’s aft (rear) sank with no indication of a spill. “We can consider ourselves lucky that there is no oil spill yet,” Capt. Silva opined.

Responding to a question, Capt. Silva stated that while oil containment booms and skimmers were on standby in case of an oil spill, using them in the rough seas would be difficult.

Addressing the media, Minister Abeygunawardena stressed that the Government strongly denied any wrongdoing in allowing the controversial vessel to enter the Colombo Port anchorage.

“We see this incident as an accident, a random event. Such things happen in and near busy ports around the world. We see that some politically-motivated persons and groups are trying to use it for their political gain,” charged Minister Rohitha Abeygunawardena, adding that the port authorities had not neglected their duties in relation to how the incident was handled. Abeygunawardena argued that allegations should be based on facts and evidence.

Minister Abeygunawardena refuted allegations that Sri Lanka allowed the ill-fated vessel to enter the Colombo Port when she was not allowed to berth at two other ports. “This vessel, the MV X-Press Pearl, berthed at Jebel Ali Port in Dubai, Hamad Port in Qatar and at Hazira Port in India before arriving at the our harbour and laying anchor off Colombo Port,” Abeygunawardena stressed.

Responding to a question Gen. (Retd) Daya Ratnayake stated that the Singaporean-flagged container vessel had called at Colombo Port twice before in March and April this year. The vessel had filed all relevant paperwork and certifications before it was permitted to enter the anchorage, Capt. Silva added.

Silva argued that many vessels enter ports with dangerous cargo that is strictly regulated, stressing that the presence of dangerous materials on-board a vessel in itself is not grounds for denying access to a port if the vessel had the relevant documentation and valid certification.

According to Capt. Silva, the MV X-Press Pearl had anchored off Colombo Port at 1230am on 20 May. The vessel had not indicated that there was a chemical leak on-board until after it arrived at the Colombo anchorage, only seeking permission to re-berth the container the next day, citing the chemical leak. The container which is suspected to have had the leaking chemicals had been loaded on the vessel at Jebel Ali Port in Dubai, United Arab Emirates, the Harbour Master added.

SLPA officials argued that such leakages were normal for feeder vessels like the X-Press Pearl and that the Port was capable of handling such issues.

Rejecting criticism regarding the response to the incident and the inability to douse the blaze aboard the vessel faster, both SLPA Chairman and the Harbour Master argued that cyclonic weather in the Indian Ocean along with two- to five-metre waves and winds with speeds of 60 knots had hampered their response.

According to Director General of Merchant Shipping Ajith Seneviratne, the owner of the vessel had agreed to make interim payments for the incident. The Merchant Shipping Secretariat is working closely with the Attorney General on claiming compensation for the incident, Seneviratne said, adding that the Criminal Investigation Department (CID) would work closely with Navy divers to recover the digital recorders of the MV X-Press Pearl to establish her communications, systems and navigation logs for legal action.

“This is the biggest marine disaster we have witnessed in Sri Lanka. The chemicals have either burned up or dissolved in the sea and would have a localised impact. Right now, we are seeing millions of plastic nurdles washing up on our beaches. An oil spill now would be disastrous,” Marine Biologist Dr. Asha de Vos told the media.

Dr. de Vos expressed concern about the long-term impact of the tons of plastic nurdles which had been released into the ocean from the MV X-Press Pearl, pointing out that they could have a wide-ranging effect on marine life, beaches, mangroves and inland water bodies, and impact the tourism trade and livelihoods of fishermen. The plastics and chemicals are debris washed ashore following the fire aboard the vessel.

A massive coastal clean-up operation has been launched, coordinated by MEPA with the assistance of hundreds of military personnel.

The Colombo Magistrate’s Court has issued a travel ban against three crew members of the MV X-Press Pearl, following a complaint filed by MEPA at the Harbour Police Station. The investigation into the incident is being carried out by the CID with the Government Analyst directed by the Magistrate’s Court to carry out an assessment of the stricken vessel and provide a report on the impact on the environment.

The fire on-board the MV X-Press Pearl took 13 days to extinguish after a combined effort by local and Indian agencies supported by salvors.

X-Press Feeders, the vessel operators of the ill-fated MV X-Press Pearl container ship, yesterday (3 June) apologised for the impact that the incident has caused on livelihoods and the environment, adding that the firm was working closely with local authorities on the matter.

In an interview with Singaporean Media outlet Channel News Asia, X-Press Feeders’ CEO Shmuel Yoskovitz expressed “deep regrets and apologies” for the impact that the incident has caused.

“I’d like to express my deep regrets and apologies to the Sri Lankan people for the harm this incident has caused to the livelihood and to the environment of Sri Lanka,” Yoskovitz said.

The ship operators’ comments come in as local authorities muster all available resources to face a possible oil spill from the vessel. Local marine environmental regulators and scientists have called the incident the worse marine disaster Sri Lanka has faced to date, with concerns about the long-term impact of the vessels debris, including plastic nurdles on the local marine ecosystem.

Yoskovitz has stated that the damages of the incident are being assessed, pointing out that it will take time.

“It is very hard to estimate any cost or damages at the moment. But we are insured. The direct financial burden on X-Press (Feeders) will be very limited,” he stated.

Yoskovitz said that the vessel’s crew had followed the guidelines of the International Maritime Dangerous Goods Convention (IMDGC) when dealing with the leaking container. However, he stated that the shipping companies have been trying to raise awareness about this issue of inadequate packaging of chemical.