Future of the world’s best cuppa 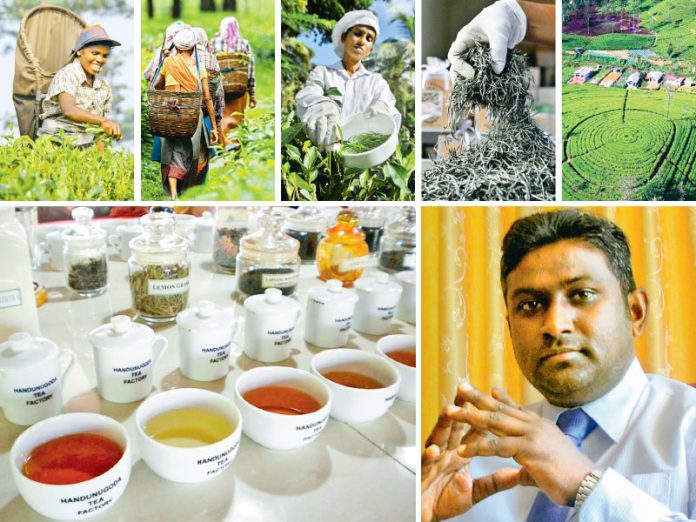 Tea – although introduced by the British purely as an industrial crop – has become an integral part of Sri Lanka’s cultural heritage. One of the country’s biggest exports, tea is something Sri Lanka can’t do without. Of course, that only makes International Tea Day, which is celebrated on 21 May each year, ever the more important.

However, the tea industry as a whole is currently facing one of its biggest challenges in history, braving the rough waters of a country in an economic collapse, just after the crippling blow dealt to the industry as a result of the ban on chemical fertilisers was resolved, Sri Lankan tea, (internationally renowned as Ceylon Tea) is certainly in a precarious situation.

In commemoration of the International Tea Day, Ceylon Today reached out to the Director and Chief Executive Officer of the National Institute of Plantation Management Sri Lanka, Dr. Prasad Dharmasena to learn more about the current situation of the tea industry in Sri Lanka, and the many challenges it has to face in the future.

The best of the world

“Sri Lanka is the fourth largest tea producer in the world,” he revealed.

Out of the roughly 300 million kilograms of tea, a vast majority is exported overseas to countries such as Iran, Iraq, Turkey, the United Arab Emirates (UAE), Russia and many more, “Earning nearly US$ 1.3 billion,” Dr. Dharmasena explained.

That of course, is a lot of money, but Sri Lanka used to earn a lot more.

He revealed that although there was a slight recovery in 2021, producing nearly 300 kilograms of tea that year, Sri Lanka had failed to produce to its full capacity or potential due to the circumstances of the time, mainly being the ban on the importation of chemical fertilisers.

Sadly, the Sri Lankan tea industry isn’t out of the woods yet, and its record so far in the first quarter of 2022 has underperformed comparing the past year’s first quarter in terms of tea production and exports. “From January to March 2022, we’ve exported about 63.70 million kilograms whereas in 2021, during the same period we have exported 69.89 million kilograms.”

There are a number of factors that played to this drop in production, including the ongoing economic crisis and fuel shortages. “The existing political instability also plays a massive role,” Dr. Dharmasena added.

Of course, there are other factors as well. The war going on between Russia and Ukraine has caused a drastic drop in imports by Russia, according to Dr. Dharmasena. “Countries such as Iran, Azerbaijan and the UAE have significantly increased their importation of Sri Lankan tea, while other countries such as Libiya, Saudi Arabia and Germany have significantly reduced their imports.”

All figures calculated, Dr. Dharmasena doesn’t project a happy story for this year’s future in the tea industry. “My opinion is that we can probably achieve a maximum of 290 million kilograms if favourable climatic conditions continue for tea growing.” A 10-million-kilogram decline compared to 2021.

“But if we expedite the process of importing chemical fertiliser now, we might be able to increase our production by the end of the year to have a more favourable outcome.”

Dr. Dharmasena stressed that even though producing 300 million kilograms of tea would be an achievement, this figure is far from the country’s potential as a global tea supplier. With the demand for tea calculated to grow by 2 per cent, Sri Lanka needs to ramp up production now, before Kenya, our main competitor, pulls the rug under our feet.

“We are not in a position to address that increased demand, but Kenya is playing a significant role in grabbing the world tea market. If things continue, the Kenyan tea industry is very likely to fill-in that vacuum.”

As expected, the biggest culprit of the decline in production was the lack of sufficient chemical fertilisers and other necessary agrochemicals, according to Dr. Dharmasena’s data. And the dip in production has been a major blow throughout the many thousands of families that earn their living through the tea industry.

“Only a small portion of Sri Lanka’s tea industry is operated by major corporations, roughly 30 per cent,” Dr. Dharmasena explained. “Most of those in the tea industry are small-holders [small scale cultivators]. Over 500,000 tea smallholders operate in the country, and are responsible for more than 70 per cent of the country’s tea production,” he continued.

He explained that nearly 1.5 million people earn their living through the tea industry, and have been directly affected by the severe blow suffered by the industry the past year. “Their standard of living, health benefits and much more have been significantly affected,” he shared. “People are suffering.”

As expected, the previous year’s fertiliser ban was the main culprit behind the underperforming of the tea industry. “If it weren’t for the favourable conditions that we experienced last year, we wouldn’t have been able to achieve a production of 300 million kilograms,” Dr. Dharmasena revealed. Of course, that also means Sri Lanka missed a golden opportunity to boost its production, a major failure caused by a poorly made decision.

“But that’s not the only cause. The devaluation of the Sri Lankan rupee is another major problem, as well as the huge demand for fossil fuels.”

“2020 is a good example of this,” he revealed. “Because of the heavy rainfall and extreme weather we experienced, we had an extremely low yield from the tea industry, the lowest since 1997. This could also be one of the reasons why Sri Lanka’s tea yields have been decreasing over the years. I would say from 2000 onwards, we have been strongly affected by climate change.”

Another major cause for concern is the condition of the soil, according to Dr. Dharmasena who revealed that Sri Lankan soil has been deteriorating fast due to the unsustainable practices conducted by tea cultivators.

For all this, the human element has been a key factor according to Dr. Dharmasena. With more than 70 per cent of tea being cultivated by small-holders, properly educating them with the skills and knowledge to protect the richness of the soil used for plantation will be key in addressing the many issues faced within the Sri Lankan tea industry.

According to Dr. Dharmasena, one of the best things we can do is to encourage small-holders to return to some of the practises exercised by planters in the past. “For example, my family also comes from a tea background, and I remember we used to grow kumbuk, mee and many other beneficial plants in our small tea estate,” he recounted. “We used to grow gliricidia which is rich in nitrogen, and would cut down branches, spreading them out on the ground during rainy season to enrich the soil.”

Sustainability and circularity are concepts that can easily be overlooked in search of profits, only to discover that doing so would hinder future profits in the long-term.

Besides Government implementing good policy decisions on their end, Dr. Dharmasena believes that developing the human element will be a key to securing a stronger future for Sri Lanka’s tea industry.

Of course, being a part of the NIPM, Dr. Dharmasena is in the perfect position to help make that change happen. “The NIPM’s mandate is to develop the human capacity of those involved in the plantation sector,” he explained.

As such, the NIPM is heavily involved in providing educational programmes for those in the plantation sector to better equip themselves with the skills needed to be a more effective contributor to the industry.

“One of the main things we want to do is not to develop farmers, but entrepreneurs,” he explained. “We want even small scale cultivators who might grow only a few perches of tea in their land to develop a business mindset, which will collectively elevate the plantation and agricultural sector as a whole.”

With this end-result in mind, he revealed that the NIPM plans to provide a number of degree programmes to those who hope to be part of the agri-business sector, to develop the skills of the next generation of cultivators in Sri Lanka, as well as providing educational opportunities for students overseas to educate themselves in agri-business here in Sri Lanka.

It’s clear that the tea industry still has a lot of potential for development in Sri Lanka, including those who are part of it in term of skills and competencies, and institutions such as the NIPM are playing a key role in building the future for the agricultural industries of tomorrow. Although this year in tea may look dark, that doesn’t mean there aren’t exciting times to come, as we begin to recognise the importance of developing agricultural technology and our industries.