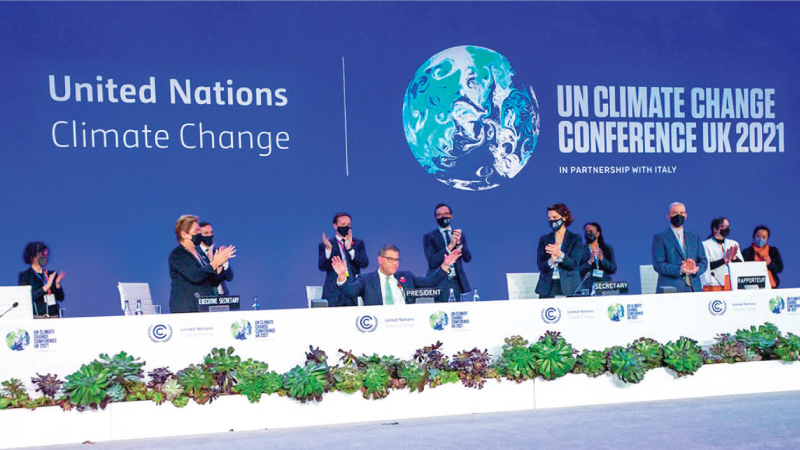 About a third of global gas emissions come from agriculture and land use, yet, the final communique of COP26 in Glasgow, Scotland, failed to make any direct reference to the relationship between climate action and the world’s food systems. This is at a time, when the World Food Program (WFP) has warned that up to 45 million people in 43 countries are on the brink of a famine.

For nearly three decades now, the United Nations (UN) has been bringing together almost every country on Earth for an annual global climate summit—called COPs—which stands for ‘Conference of the Parties’. This year’s two weeks talkfest that ended on the weekend in Glasgow was the 26th, and in this quarter of a century climate change has transformed from a fringe issue that is of concerns to mainly Green parties to one which is in the mainstream of global politics and media attention. The next year’s event (COP27) will be held in Cairo, Egypt.

The Food and Agriculture Organisation (FAO), in a report released in April this year, estimated that more than 680 million family farms occupying 70–80 percent of the world’s farmland, produce about 80 percent of the world’s food. Yet, an issue that involves the livelihood of at least three billion people and has a direct impact on the achievement of food security as prescribed in Sustainable Development Goals (SDG) Number 2, did not attract a direct mention in any of the 97 clauses that were in the COP26 final communique.

In a communique that begins with the words, “Recognizing the role of multilateralism in addressing climate change and promoting regional and international cooperation in order to strengthen climate action in the context of sustainable development and efforts to eradicate poverty”, could not find space to refer to an issue that is central to eradicate poverty—food security. The preamble also refers to the “importance for some of the climatic justice”, and it is dressed up as a human rights and social inequality issue, presumably to placate some civil society groups.

A number of clauses, such as Clause 15, urge developed country Parties to “urgently and significantly scale up their provision of climate finance, technology transfer and capacity-building for adaptation so as to respond to the needs of developing country Parties as part of a global effort”. This is a line pushed by many developing countries at COP26, but, it lacked detailed commitments.

Clause 27 talks about a decision to establish a work programme to urgently scale up mitigation ambition—meaning measures to minimise greenhouse gas emissions to the atmosphere. And Clause 38 emphasises the importance of protecting, conserving and restoring nature and ecosystems with forests and other terrestrial and marine ecosystems acting as sinks and reservoirs of greenhouse gases—but no link to the farmlands and fisheries that is the lifeblood of millions of communities. The next clause says that they recognise “that enhanced support for developing country Parties will allow for higher ambition in their actions”.

In Clause 44, there is an acknowledgement of the developed country Parties’ failure to mobilise US$ 100 billion annually by 2020 for mitigation actions (as agreed over a decade ago). Clause 73 says that COP26 had decided to establish the “Glasgow Dialogue between Parties” to look at providing financial support to communities that are suffering from irreversible damage from climatic impacts. But, the developing countries have asked for a facility to be established for this purpose, not another dialogue.

The thrust of the communique seems to be heavily focused on technological solutions to mitigate climate change impacts on communities which put developing countries at the mercy of mainly Western technology and transfer. There is no hint of rich countries making sacrifices such as cutting their cattle or sheep herd numbers to reduce methane gas emissions. This was a reason why Australia and the US refused to sign the methane gas emission reduction agreement.

London’s Guardian reported that none of the Presidents of the UK’s four farming unions present at COP26 were willing to reduce livestock numbers and instead they told the Guardian that methane emissions could be dealt with through new technologies rather than reducing the number of cows on farms. Thomas Vilsack, the US Agriculture Secretary, has also told the newspaper that he believes Americans can carry on eating the same amount of meat while keeping the world within safe limits on global heating.

“Food systems are largely absent from the climate conversations,” notes Ruth Richardson, President at the Global Alliance for the Future of Food. “And we know that when we look at food systems as a whole—when we are talking about chopping down the rainforest for livestock production, we are talking about transporting beef across the country and long supply chains, and we are looking at all the various aspects of food systems—we know that they are the No. 1 contributor to greenhouse gas emissions,” she told Devex adding, “unless we deal with food systems, we are not dealing with climate.”

The proposed solutions from COP26 seem to go in two different directions but being presented as complimentary—reforestation on the one hand and technological innovation in agriculture on the other.

Rodney Ferguson, CEO of Winrock, a US international development organisation, argues that if small-scale farmers are to be incorporated into climate-smart agriculture, it would require providing them with technology that they could afford to use and feed their families.

“If it remains an additional cost borne by a smallholder whose annual income may only be US$ 300 a year anyway and you’re asking he or she to implement methodologies or products—or not do things that may cost US$ 50—that’s never going to succeed,” he told Devex.

There was however, one day—November 10—allocated for discussion of sustainable agriculture and land use called the ‘Nature and Land Use Day’. During the day a number of initiatives were announced including the Global Action Agenda on Innovation in Agriculture’ signed by 150 countries—a global initiative aimed at reaching 100 million farmers with net-zero and nature-positive innovations.

Though this don’t seem to have gone into the COP26 communique, Shane Holland of UK’s Slow Food welcomes such commitments but points out that similar pledges in 2010 by rich countries are yet to be realised. He also questions whose land would be earmarked for reforestation, pointing out that, we need to tackle the causes of climate change at its source by ending the world’s hunger for global commodity crops such as soya (for feeding farm animals), and palm oil at its source. “Until we do this, global food will continue to drive climate change,” he adds.

“We have heard arguments that said because the world expects crop losses that we must intensify agriculture to act as an insurance policy, yet this fails to acknowledge that this is precisely driving the problem,” he argues. “There are many other things the world needs to do: from ending fossil fuel use, to overhauling transportation and our electricity supplies—but our food system has the potential to be a carbon sink, and (this) is an opportunity lost”.

Fishing and Naval Communities warned to be alert