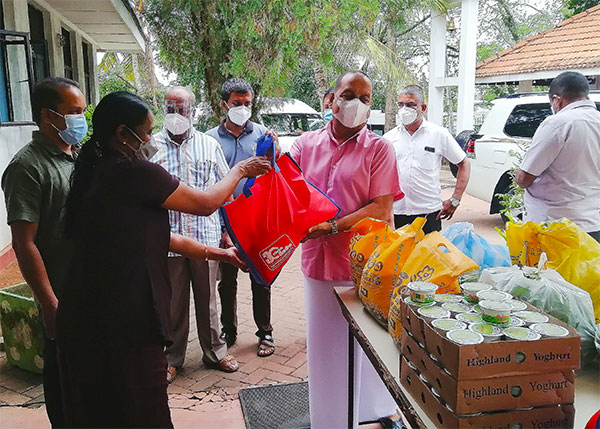 All necessary guidelines have been issued regarding the disposal of used masks, and clinical waste, but many people disregard them and cause environmental pollution by discarding those materials haphazardly, says Environment Minister Mahinda Amaraweera.

“Guidelines issued by the Central Environmental Authority (CEA) should be followed, especially when masks are disposed of. It is best to cut off at least two of the ear straps. Otherwise, even animals, including birds, will be killed by getting entangled in them. Everything cannot be controlled by the government or by law,” Amaraweera said while donating a stock of food items to an elders’ home in Wickramasinghepura, Battaramulla, to mark the first anniversary of his inauguration as the Minister of Environment.

“I was also informed that a person or a group or an institution has dumped clinical waste on the Wellawatte beach polluting the beach as well as the surrounding ocean, he said, adding that it was the responsibility of the Marine Environment Protection Authority (MEPA) and the Ministry to take legal action against those responsible and to remove the clinical contaminants and to dispose of them.

Amaraweera said that he had instructed the Central Environmental Authority as well as the officials of his Ministry to conduct an immediate investigation. CEA and the MEPA have also launched separate probes, he said.

“I also instructed the officials of our Ministry to submit a report on the clinical waste dumped on the Wellawatte beach.

” If anyone releases such clinical contaminants as well as masks into the environment, he or she will be made to pay for it. The CEA has issued guidelines on the procedures to be followed for the disposal of clinical waste as well as the disposal of face masks. Everyone should act accordingly,” he added.