Encroachment Pushing Veddhas to the Brink 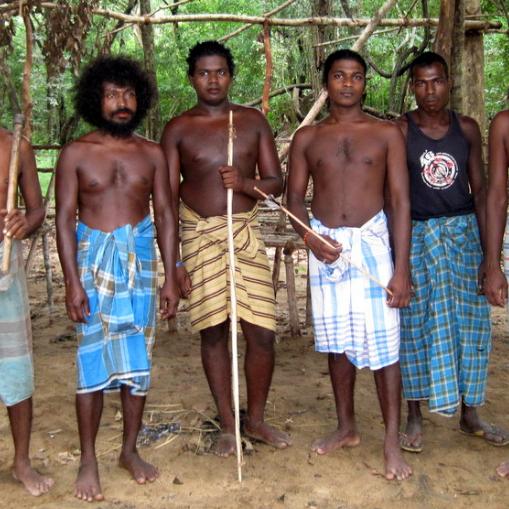 Although the most commonly acknowledged negative impact of deforestation is that on wildlife habitat and the environment, one direct impact that has not been brought to the limelight is that of the shrinking of traditional land belonging to the indigenous population.

One such recent incident reported is that of the clearing of the water catchment area of the Rambakan Oya Reservoir in the Ampara District. This raised several concerns of the destruction of land owned by indigenous people and the loss of their livelihood together with the damage caused to both the environment and wildlife.

Pollebedda is a remote village in the dry zone situated at Maha Oya and is found on the way to Rambakan Oya Reservoir and is one of the traditional homelands of indigenous Veddha population.

The reservoir was designed and constructed by the Sri Lanka Mahaweli Authority to provide a permanent solution to the drinking water issue and irrigation problems in the area.

The forest cover of the water catchment area of the Rambakan Oya Reservoir in the Galwalayaya State Forest close to the Pollebedda village in the Ampara District has however, been cleared using dozers to be utilised for a project to be given out for commercialised maize plantation in the recent past.

An area of approximately 500 hectares has already been cleared for the proposed agricultural and livestock development project according to the site inspection carried out by the Centre for Environmental Justice (CEJ).

One of the main concerns that arose as a result of this proposed project is that such clearing of land will affect traditional aboriginal people and communities living in the area.

Further it has also been brought to light that run off pesticides, herbicides and fertilisers used for the commercialised plantations under the proposed project will pollute the springs, streams and small water ways in the area connected to the Rambakan Oya Reservoir.

Further the livelihood of the inhabitants largely depend on the forest and they have limited access to healthcare facilities due to which they depend on indigenous medicine prepared from various herbs, honey and other forest produces found in the area.

Further it was also stated that clearing of the forest cover will result in washing off of soil which will ultimately get deposited in the Reservoir and the streamlets and water ways in the areas which are cleared had also been obstructed with trees preventing the flow of water.

The chief of the indigenous population in Pallebedda had thereby informed the President, Minister of Environment, relevant authorities and officers of the destruction caused to the area by the proposed project and the grievances of the inhabitants.

Following continuous concerns against the proposed Agriculture and Livestock Development Project, Veddha Chief, Uru Warige Wannila Aththo and CEJ filed a Writ Petition in the Court of Appeal challenging the clearing of land.

Violations specified by the CEJ

Director of the CEJ, Hemantha Withanage stated that as per Section 23AA of the National Environmental Act No.47 of 1980, as amended, all prescribed projects that are being undertaken in Sri Lanka by any Government Department, Corporation, Statutory Board, Local Authority, Company, Firm or an individual will be required to obtain approval under this Act for the implementation of such prescribed projects.

Accordingly, all projects which are conversion of forests covering an area exceeding one hectare into non-forest uses and clearing of land areas exceeding 50 hectares must undergo an Environmental Impact Assessment (EIA) under the Gazette No. 772/22 dated 24 June 1993.

Therefore, if any approval has been granted for this project without carrying out an EIA with a detailed and comprehensive study of environmental impacts in the forest area, it is illegal and contrary to the provisions of the National Environmental Act, Withanage noted.

According to the CEJ, and the Executive Director, the Constitution in Article 27 (14) of the Directive Principles of State Policy enjoins the State to protect, preserve and improve the environment, while Article 28(f) refers to the Fundamental Duty upon every Sri Lankan to protect nature and conserve its riches.

Thereby, stating that there will be a grave and irreparable loss, damage, harm and perilous repercussions caused to the forest cover, the unique ecosystems within such area and the health and the livelihood of the inhabitants.

It was further stated that the construction of an elephant fence in the cleared area has already commenced without the approval of relevant authorities, thereby illegally restricting the movement of elephants.

This may result in elephants wandering off to nearby villages in search for food resulting in Human-Elephant conflict.

CEJ stated that the elephant fence has to be erected in consultation with the Department of Wildlife and cannot be put up according to the whims and fancies of parties violating the provisions of the Fauna and Flora Protection Ordinance.

Director General of CEA, Hemantha Jayasinghe speaking to Ceylon Today, stated that in order for the approval or disapproval of the project there has to be a full project proposal and when the initial proposal was put forward to the CEA by the Mahaweli Development Authority, this was requested from the Authority.

He also said, there were certain guidelines set forth for the Mahaweli Development Authority prior to carrying out the project adding that with the increased concerns to the environment and upon having examined that manner in which the project had commenced, it was evident that the Mahaweli Development Authority had acted over and above their powers.

He added that thereby, a letter was addressed to the Authority by the CEA to immediately halt operations and to carry out an EIA considering the environmental impact.By Faadhila Thassim | Published: 2:00 AM Feb 13 2021