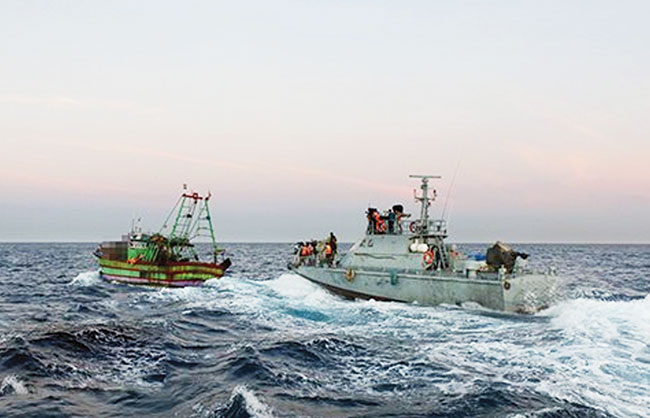 The Palk Bay, which separates Sri Lanka from India, has some of the finest fishing grounds in the Indian Ocean. However, the waters off the Indian coast have now been depleted of fish because of bottom trawling. For instance, V. Suryanaryanan, a scholar at the Carnegie Institute says, “To increase productivity and boost exports, the Government of India embarked on a radical transformation of fishing techniques. The result was the introduction of trawling…. Trawlers have been referred to as the “hoovers of the shelf bottom. After their introduction, the Indian side of Palk Bay quickly became devoid of fish.” (www.carnegieindia.org, 9th September 2016.)

Over the years, Indian fishermen have encroached into Sri Lankan waters due to depletion of fish stocks on the Indian side of the International Maritime Boundary Line and to take advantage of the conditions here. At first, they ventured only as far as islands such as Katchchativu off the mainland. However, they now come closer to the coastal areas of the mainland, at times even 1-2 km from the Island of Delft, in the Jaffna district and the small town of Pesalai, in the Mannar district, itself resulting in irreparable harm to the ecology of the waters and thereby also the livelihood of the local fisherman. It is reported that, this encroachment is affecting nearly 50,000 fisher families in the Northern Province. (Sunday Times, 19th December 2021)

There are countless testimonies of the victims. One such is that of a Jaffna fisherman who had been resettled after the war. In an interview with Economy Next magazine, he says, “We have lost around 40 percent of our daily catch due to bottom trawling by Indian fisherman.” (www.economynext.com, 2nd November 2021) Consequently, there has been an increase in tension and animosity between Indian fishermen and the locals.

The most ominous development in this situation is that now there are clashes between the Indian fishermen and locals, out at sea, and recently two Jaffna fishermen were allegedly killed as a result of such a confrontation. Meena Srinivasan of The Hindu says, “Long-festering tensions between fishermen in Sri Lanka’s Northern Province and Tamil Nadu have escalated in recent weeks following two clashes on January 27 and 29 when Indian trawlers reportedly rammed into smaller Sri Lankan fishing boats off the coast of Point Pedro.” (The Hindu, 4th February 2022)

If the ecology of the sea off Sri Lanka’s northern coast is destroyed, it will destroy the livelihood of the local fishermen, one of the most vulnerable segments of the northern population, when they are trying to rebuild their lives after the conflict. Lack of a livelihood means poverty and its inevitable progeny, crime and violence, both within one’s own community as well as others. Such conditions are exactly the opposite of what is needed for reconciliation and advancement of human rights. Therefore, the persons, especially in the international community who advocate for reconciliation and advancement of human rights in Sri Lanka, must take immediate steps to address the issue of the encroachment of Indian fishermen into Sri Lankan waters.

Onus is on the Indian govt to resolve fishermen crisis