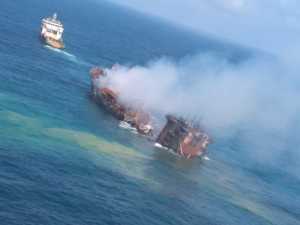 Environmental damage caused by the sinking of the Singapore-flagged MV X-Press Pearl would affect Sri Lanka for over 100 years, a top state official told The Island yesterday.

The official, who wished to remain anonymous, said that the damage to sea grasses and rare aquatic species couldn’t be estimated. “I don’t know how we can place a monetary value on the damages,” the official said.

A senior marine scientist also said the sinking of the Singapore-flagged MV X-Press Pearl would have a disastrous impact on Sri Lanka’s fishing industry.

The scientist noted that the impact on the fisheries industry would be colossal and felt for at least three years. “Three years is a very optimistic estimate. And I am talking only about fish that we harvest for food,” he said.

The Hikkaduwa Wildlife Office was ordered by the Galle Additional Magistrate to investigate the carcass of a turtle found on the Unawatuna beach yesterday. They were asked to send the carcass to the Attidiya Wildlife Veterinary Office.

The Additional Magistrate ordered officials to determine if the death of the turtle was caused by the chemicals released from the X-PRESS PEARL vessel.

Efforts to tow the ship into deeper waters away from the Port of Colombo failed as the ship’s stern got stuck on the seabed. The ship operator said that the ship’s stern was resting on the seabed about 21 metres below and the ship’s bow was settling down slowly. The company said salvage experts were there “to monitor the ship’s condition and oil pollution.”

The company said its experts were cooperating with Sri Lanka Navy to deal with a possible oil spill or other pollution.

Navy spokesman Capt. Indika de Silva said the navy and coast guard were ready to handle an oil spill with assistance from India, which has sent three ships to help, including one specifically equipped to deal with marine pollution.

Marine Environment Protection Authority Chief Darshani Lahandapura said Oil containment booms would be positioned around the vessel and chemical dispersants would also be dropped from air in the event of an oil leak.

“If the weather is not on our side, we will have to be ready for a beach clean-up and we are prepared for those operations as well,” she said.

The Centre for Environmental Justice (CEJ) said it was in the process of filing a public interest litigation against the company that owns X-Press Pearl. “This may involve certain government officials as well,” opined CEJ Chairman, Attorney-at-Law Ravindranath Dabare.

“According to the Marine Pollution Prevention Act No. 35 of 2008, a civil suit can be filed under Section 35 and criminal action can be filed as per Section 26. We had a bitter experience with MT New Diamond as we claimed compensation based on the Polluter Pays Principle.”