Construction of Gampaha section of Central Expressway not halted: Ministry of Highways 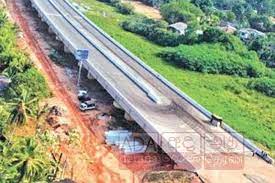 The Ministry of Highways Johnston Fernando has denied reports that construction work on the Gampaha section of the Central Expressway has been halted.

The Secretary to the Ministry of Highways has issued a statement denying media reports that work on the Gampaha section of the Central Expressway has been suspended.

The Gampaha and surrounding areas have been inundated due to the recent heavy rains due to development work on the section of the Central Expressway from Kadawatha to Mirigama.

According to the statement, the Ministry of Highways, Johnston Fernando and the Ministers of the Gampaha District had a special discussion with the officials of the Road Development Authority, the Irrigation Department and the Land Development Corporation of Sri Lanka in this regard.

“There was a lengthy discussion on the flooding of Gampaha and the surrounding areas. Based on the findings, more than 300 mm of rain fall was reported in a very short period of time and the drainage systems and canals in the area were not repaired and the drainage obstructions on the railway tracks were identified as the main reasons for the floods,” the statement said.

It has also been decided to take necessary steps to avoid any inconvenience caused to the public due to the construction of the expressway and any possible occurrence in the future.

The Ministry of Highways further stated that the construction work on the Central Expressway from Kadawatha to Mirigama will continue.

Shortage of fertiliser may provoke scarcity of food, Agro-specialists warn