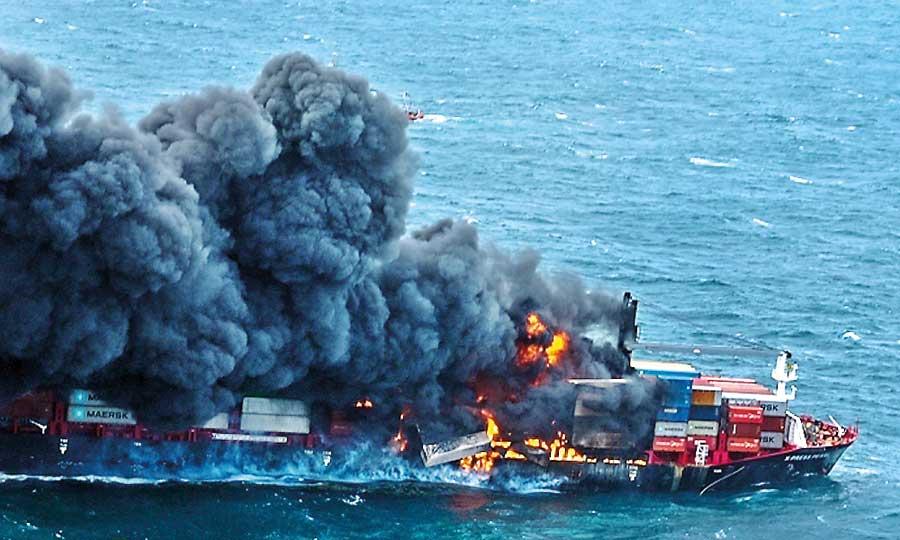 Arousing nostalgic memories of ‘For a Few Dollars More’, the mid 1960s film craze born with the screening of blockbuster Dollar series’ second film [the Italian trilogy of Clint Eastwood fame], ‘Daily Mirror had whined and whimpered that the entire operation including inviting the Singapore-registered ship MV X-Press Pearl to Colombo Harbour and the attempt to douse the fire was done merely to obtain a few dollars as compensation.

It may sound silly or even ridiculous [a reader’s initial impression], but the fact that the learned lady apart from her extensive knowledge in the field of environmental studies, is also in possession of a good understanding of local political set up and the players involved, being the only female contestant for the Executive Presidency of Sri Lanka in 2019. Was she swayed by the tragic statement made by the Cabinet Minister- Vasudeva Nanayakkara, who boasted of ‘compensation package’ attached to the unprecedented environmental disaster and the irreparable damage caused to marine lives and other natural wealth like coral reefs? It was the same minister who on 20th November 2020 said in Parliament, “Sri Lanka does not need the vaccine right now but will order the vaccine when required”, in response to a question by Sajith Premadasa, whether the government had approached vaccine manufacturers.

Dr. Perera with Master’s and a PhD from Ludwig-Maximilians-Universität in Munich, Germany, in the field of environmental studies should have been consulted by the authorities before deciding on a course of action. She told Daily Mirror last Monday that, “We have lost a whole ecosystem, animals would have just dissolved; you won’t be able to see animals being washed ashore, It just dissolves due to huge quantity of nitric acid”. Paradoxically, the lady who did her first degree in biochemistry and physiology at the University of Sheffield, blamed authorities on Satana TV show on Wednesday night for not employing divers to go under the vessel and check its bottom for damages! Probably due to the excitement caused by the anxiety or nervousness, knowing the severity of catastrophe.

She prepared a Hazardous Waste Policy for Sri Lanka, in 1993 based on the BASEL Convention in Switzerland. Her policy statement which prevented trans-boundary movement of hazardous waste was blatantly violated during Ranil Wickremasinghe’s tenure as Prime Minister, when they allowed 263 Containers containing tons of hospital waste including body parts [human] from mortuaries clinical waste, used cushions and mattresses, plant parts, plastic waste and other hazardous and uncategorised waste. Dr Ajantha accepted an invitation by the UNP leader in 2020, left her party and contested the general election in the Colombo District. The consignment of garbage from UK arrived on ‘Thalassa Pistis’ in late January 2018. At the time , the ministries involved[the Central Environmental Authority and the Customs], of Wickremasinghe government maintained stoic silence raising questions as to whether there was a deal involving the highest in the state authority. Was there a cover-up conspiracy in the making, as speculated then by many? How did such a violation take place, without the authorities being aware?

The containers were inspected only in July 2020 under the Rajapaksa administration when people complained about a horrible stench emanating from them. Centre for Environmental Justice (CEJ) filed action against the illegal activity citing severe destruction to the environment and devastating threats to the health of the public and the exposure of the population to numerous health risks due to the pathogens in the waste found in imported waste, also due to the negative blow on the bio-diversity. The then government failed to reveal the wrongdoers, motivating the then opposition to accuse the government of allowing the country to become a dumping ground for toxic garbage for yahapalana politicians to fill their private coffers.

“She told Daily Mirror last Monday that, “We have lost a whole ecosystem, animals would have just dissolved; you won’t be able to see animals being washed ashore, It just dissolves”

The waste was imported disregarding the terms of the BASEL Convention, as per which import of hazardous waste to Sri Lanka has been restricted. As the BBC reported In June 2019, some Western nations consign their recycle waste to third world countries since it is cheaper and also reduces domestic landfill. They profess a deceitful idea that it is beneficial to developing nations to meet their recycling targets and taking this waste acts as a source of income.

Apart from unforeseen or accidental disasters [around 90 occurred in 2020 itself], shipping industry causes enormous destruction to all forms of ocean and marine resources. Experts say environmental impact of shipping comprise emission of greenhouse gases, water pollution, air pollution, acoustic, and oil pollution. The International Maritime Organisation calculate approximately that carbon dioxide emissions from shipping as equal to 2.3 % of the human-made emissions, [2012] and projects to rise 50 to 250 percent by 2050. There is an opinion that cargo transport by ship is low in air contaminants, because for equal weight and distance it is the most efficient mode of transport. Researcher Alice Bows-Larkin says, this is correct in comparison to air freight; sea shipment accounts for huge tonnage and the distances are large, and shipping’s discharges are substantial.
Ballast water discharges and its impact on the marine environment.

Large tankers, Cruise ships, and cargo carriers use huge quantities of ballast water, which is taken on in the coastal waters in one region after unloading cargo or discharging wastewater at the next port of call, wherever extra cargo is loaded. Ballast water contains an assortment of biological materials, including animals, viruses, plants, and bacteria. These materials often include invasive, exotic species, non-native, nuisance that can cause wide-ranging environmental and economic damage to aquatic flora and fauna along with severe human health problems.

Characteristics of Great Ocean — Paharada Sutta
According to the Sutta once Pahārada, a chief of the Āsura said “There are, eight excellent and wonderful things which we again and again perceive in the great Ocean.

In the glorious days of the sailing ships up to end of 19th century, there was no destruction to any form of ocean or marine resources. Neither, the Buddha, nor Parhada spoke of loss of biodiversity, threat to flora and fauna, in the ocean then. Today, sustainable development is the theme.

The vessel was deprival of entry into Hamad Port in Qatar and Hazira Port in India is incorrect. The ship went through discharge and loading in both ports and continued on its scheduled journey to Colombo. Applications made at two ports to offload a nitric acid container that was leaking, but advised there were no facilities or expertise available to deal with the leak.

The flames on board the ship was controlled although the vessel still discharged smoke, with firefighting tugs persistently spraying and misting it to ensure the chilling of all hotspots and the ship’s hull and hatches while sailors were exploring the possibilities of embarking the ship and locking a tow connection in order to pull the ship securely. All this was performed under extreme weather conditions.

Measures are underway according to Dharshani Lahandapura, Chairperson, Marine Environment Protection Authority –MEPA, to protect the marine environment if the MV X-Press Pearl ship sinks. Each of the state agency entangled in this storm should conduct independent inquires, sans political authority to reveal the truth.