Climate change: If we don’t act now we will kill our planet, there is no planet B 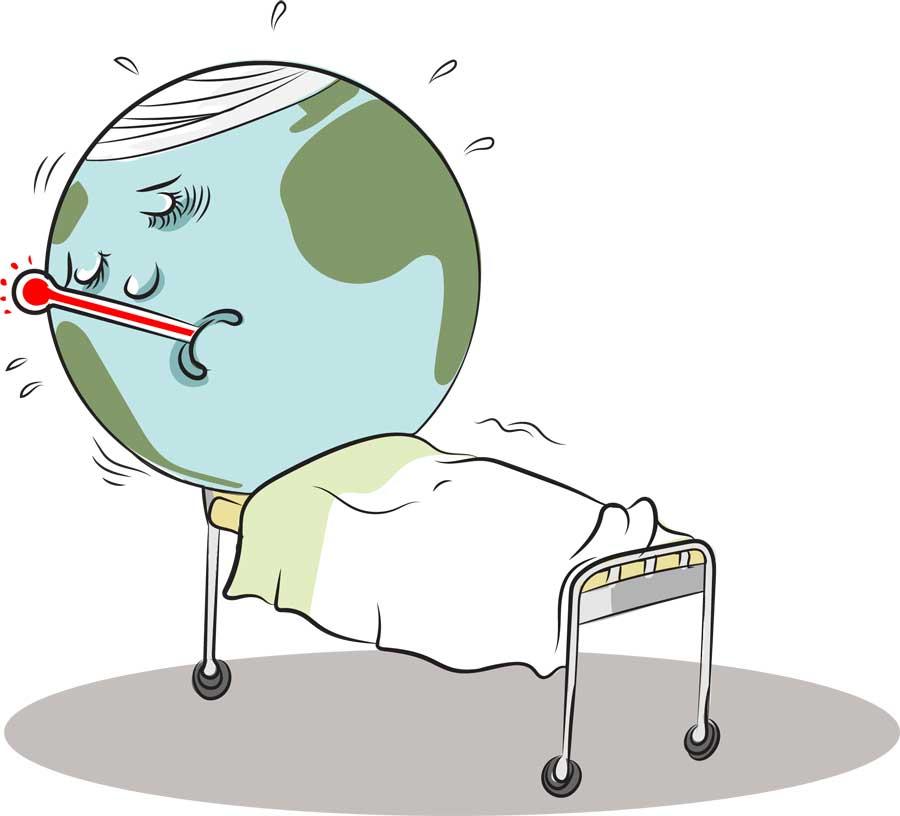 The United Nations(UN) yesterday marked the world day to combat desertification and drought with this year’s theme being “Restoration. Land. Recovery.” Sri Lanka also has major problems relating to desertification, drought and other crises relating to climate change. Environmental experts allege that thousands of acres of land are being given to big companies which cut down forests and put-up buildings for their businesses and make huge profits at the expense of farmers and other poverty-stricken people. Agriculture has not only provided us our plate of rice or “Buth Patha” everyday but also being part of our culture for more than 2500 years. But now with rice millers and others making huge profits, agriculture has become agri-business. The hardworking farmer gets a relatively small price for the paddy and at the other end consumers are forced pay a high price while the middlemen or women become multi-millionaires. Trade Minister Bandula Gunawardane often tells the people they could buy good varieties of rice from Cooperative Wholesale Establishments(CWE) or Sathosa outlets. But when people go to those outlets, they are told to buy quality rice at affordable prices from the media or the minister.

In a statement, the UN says the day is focused on turning degraded land into healthy land. Restoring degraded land brings economic resilience, creates jobs, raises incomes and increases food security. It helps biodiversity to recover. It locks away the atmospheric carbon warming the Earth, slowing climate change. It can also lessen the impacts of climate change and underpin a green recovery from the COVID-19 pandemic.

According to the UN, nearly three quarters of the Earth’s ice-free land has been altered by humans to meet an ever-growing demand for food, raw materials, highways, and houses. Avoiding, slowing, and reversing the loss of productive land and natural ecosystems now is both urgent and important for a swift recovery from the pandemic and for guaranteeing the long-term survival of people and the planet. Current commitments from more than 100 countries specify the restoration of almost 1 billion hectares of land over the next decade – an area almost the size of China. If we restore this land, we can deliver massive benefits for people and the planet.

Desertification is the degradation of land in arid, semi-arid and dry sub-humid areas. It is caused primarily by human activities and climatic variations. Desertification does not refer to the expansion of existing deserts. It occurs because dryland ecosystems, which cover more than one third of the world’s land area, are extremely vulnerable to overexploitation and inappropriate land use. Poverty, political instability, deforestation, overgrazing and bad irrigation practices can all undermine the productivity of the land.

The UN says the day needs to remind us that land degradation neutrality is achievable through problem-solving, strong community involvement and co-operation at various levels. The matter requires even more attention now. When the land degrades and stops being productive, natural spaces deteriorate and transform. Thus, greenhouse gas emissions increase and biodiversity decreases. It also means there are fewer wild spaces to buffer zoonoses, such as COVID-19, and protect us from extreme weather events, such as droughts, floods, and sand and dust storms.

The UN Convention to Combat Desertification (UNCCD) is calling on the global community to treat the land as a limited and precious natural capital, prioritize its health in the pandemic recovery and push hard to restore the land during the UN decade on ecosystem restoration. We all have a role to play because we have a stake in the future.
France’s President Emmanuel Macron has warned that, by polluting the oceans, not mitigating carbon dioxide emissions, and destroying our biodiversity, we are killing our planet. Let us face it, there is no planet B. The United States former President Barack Obama has said we are the first generation to feel the effect of climate change and the last generation who can do something about it. It is now or never.