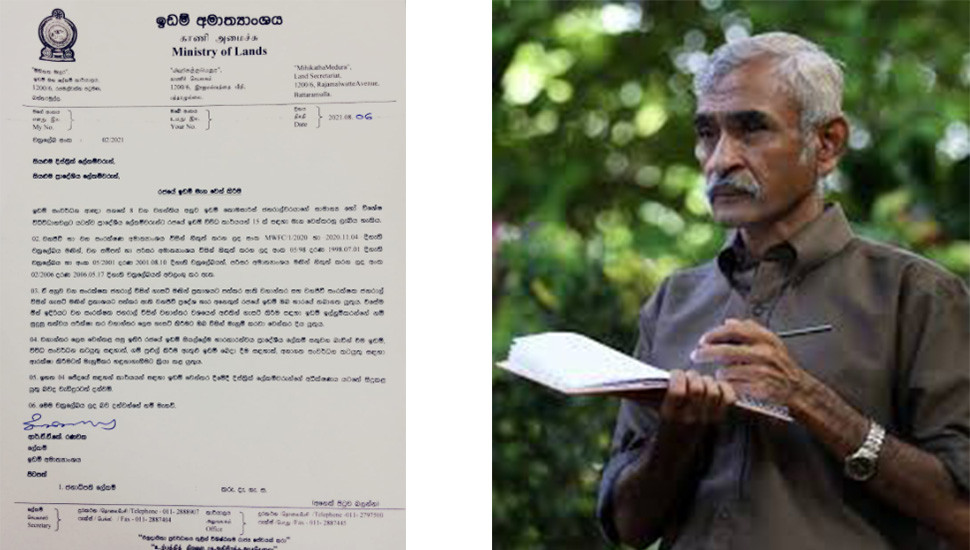 The recent Circular to demarcate State lands issued by the Secretary to the Ministry of Lands to District Secretariats and Divisional Secretariats in reference to the previously issued MWFC/1/2020 circular issued by the Ministry of Wildlife and Forest Conservation has raised several concerns. While the ambiguity of the Circular has been questioned, two main concerns are that of the possible impact on forest land and that of the legality of both the nature of the Circular and its contents.

This Circular is issued in reference to a former circular MWFC/1/2020 issued by the Ministry of Wildlife and Forest Conservation by which direct control of land considered as State forests is transferred from the Forest Department to District Secretariats and Divisional Secretariats mainly for economic and development purposes. While the previous Circular in itself was heavily criticised by several environmentalists who stated that it was in itself illegal, the argument continues in reference to the current circular on the basis that the previous circular by which the current circular derives its validity is itself invalid or illegal.

Ambiguity in the Circular

He added that according to the Forest Conservation Ordinance, an order declaring protected forest area could only be done by the Minister in charge making it clear that this circular has been issued without a clear understanding or completely ignoring the legal framework governing this area Dr.Gunawardana added that the same confusion is applicable in regards to the latter part of this point which states that a wildlife area is declared by a Gazette notification by the Wildlife Conservator General. He said there is no such position or authority named Wildlife Conservator General.

He added that circular however attempts to focus on areas other than those declared by way of the Forest Conservation Ordinance and the Flora and Fauna Protection Ordinance which are forests that are identified as Other State Forests(OSF). ‘’One main concern is that 5 per cent of natural forests are included in forest area which is considered as Other State Forests’’ he added. Another doubt that arises in regards to this circular is whether the powers vested in the Department of Forest Conservation with regard to OSF is vested upon the District and Divisional Secretariats by way of this Circular, Dr. Gunawardana said adding that a power vested on an authority by way of an Act would not be vested in another authority by way of a circular.

He said that if such power is to be vested in another authority, it could be done so by amending the Act and not by way of a circular adding such change of powers mentioned in the circular has been mentioned in violation of the powers vested in the Secretary to the Ministry and is an ultra vires act. Dr. Gunawardana also said that one other ambiguous area in the circular is the intention of the phrase which states that OSF should be taken under the custody of District Secretariats and Divisional Secretariats. According to the State Lands Ordinance, District Secretariats and Divisional Secretariats have certain powers over all types of State Lands and according to the State Lands (Recover of Possession) Act, they are also vested with Powers of Execution and thereby the powers of such authorities do not have to be specifically stated by way of this Circular.

The authority vested on the District and Divisional Secretariats

The third point of the circular further states that ‘if the Forest Conservator General requires to Gazette certain land as forest land, District and Divisional Secretariats should inspect the suitability of the area and should survey such area and reserve such land to be Gazetted as forests’ The statement ‘inspect its suitability’ is ambiguous as generally, an area declared under these three Acts are so declared in consideration of its unique value.

This includes studies on the biodiversity, water resources as well as its environmental services carried out by State entities, Universities and Environmental Non-Governmental Organisations, Dr.Gunawardana stressed. He added that this circular will result in both the officials of the Department of Forest Conservation and District and Divisional Secretariats facing several difficulties. Senior Advisor to the Centre for Environmental Justice (CEJ), Hemantha Withanage said that District and Divisional Secretaries do not have background knowledge to inspect the suitability of a land that is to be declared as forests adding that there is a persistent risk that this circular would be used by several other parties for their individual benefit.

Secretary to the Ministry of Land, R.A.A.K.Ranawaka said that the Circular has not in any manner been issued in violation of powers vested in him adding that the circular only attempts to clarify certain factors in reference to State land demarcation.

He added that a Divisional Land Use Committee consisting of several authorities will inspect the technical issues pertaining to the suitability of the land adding that there are several Laws to ensure that forest land will not be exploited while adding that there will not be an abuse in the use of land vested in the District and Divisional Secretariats. He further said that according to Section 8 of the of the Land Development Act, subject to the general or special directions of the Land Commissioner, State land may be mapped out by the Government Agent.

The Circular MWFC/1/2020 issued by the Ministry of Wildlife and Forest Conservation was severely criticised for the alleged ignorance it showed of the environmental impact and a total of over 700,000 hectares of forest land that could be at stake. This circular repeals circular 05/98 issued in 1998 limiting the size of forest land managed by the Divisional Secretariats and subsequent circular 05/2001 which authorises the management of all other forest land to the Conservator General of Forests and Circular 02/2006 which allows the Conservator General of Forests to release land for non-forest related purposes. Withnage said that this circular will allow releasing forest lands for Non-Forest uses subject to selected ad-hoc guidelines.

He added that although the Secretary has the power to cancel the previous circulars, the new law does not provide provisions to release the ‘other forests’ for the intended purposes. He further added that according to the circular, the secretary states that the forest lands will be used for economic or other productive purposes which means that the type of forests which Secretary is willing to dispose under its circular No. MWFC/1/2020 requires an Environmental Impact Assessment (EIA) under the National Environmental Act No. 56 of 1988 as amended Therefore, the release of forest lands are already governed under the Forest Ordinance and utilisation of land located within a mile of national reserves declared under the Fauna and Flora Protection Ordinance requires one to the follow the EIA process.

In reference to the environmental impact that could arise as a result of the implementation of the circular, the CEJ noted that the guidelines have been given without fully understanding the purpose of forest ecosystems but cover a list of sensitive habitats with the understanding of the Ministry personnel and by the Forest Department, who may or may not have an idea on how the forest ecosystem provides carbon and noncarbon benefits or how the ecosystem works or that forests are there for the common good and should be protected for balancing the fragile ecosystems for the millions of known and unknown species, considering the earth balance, earth systems and ecosystems.

Forests are also used to maintain natural cycles including carbon cycles, nutrient cycle, food systems, climate control, land slide control, etc. By using these lands for economic development there could be irreversible climate chaos created. The CEJ added that Government Agencies such as the Ministry of Wildlife and Forest Conservation manage forests as a trustee and have no right to utilise such land without a clear scientific approach and public consent.

Thereby the contents of the current circular together with the concerns arisen in relation to the previous circular point out the need to conserve forest lands while ensuring that there is a balance between protecting the environment while carrying out development.