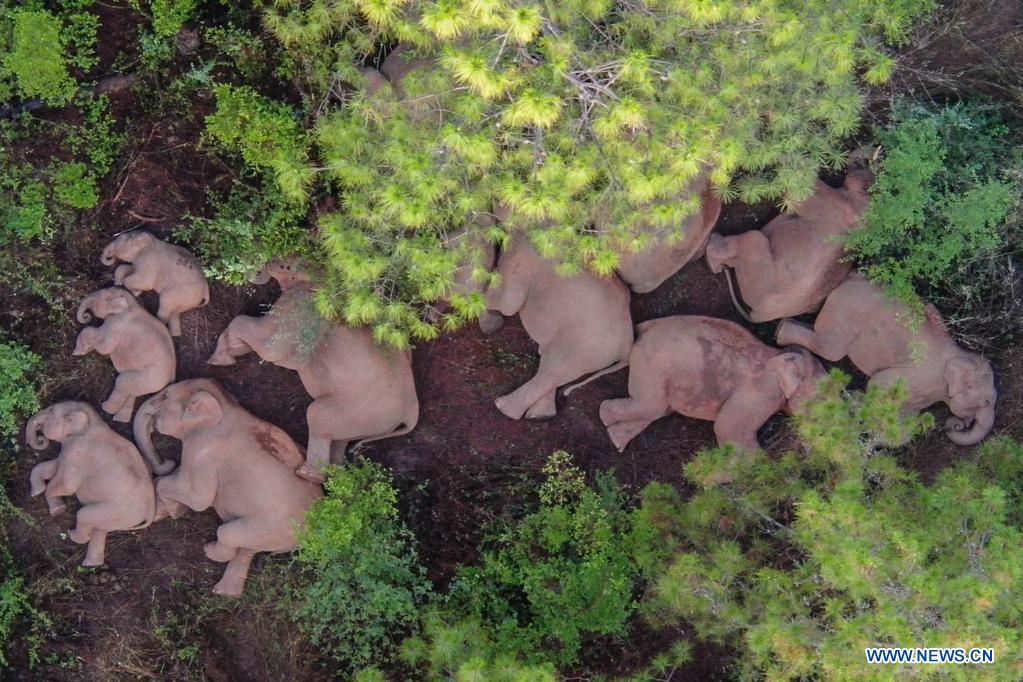 The elephant herd has caught global attention after they trekked about 500 km from their original habitat in Xishuangbanna Dai Autonomous Prefecture in the province to enter Kunming, the provincial capital with a population of 8 million, late last Wednesday.

On Saturday, 14 elephants continued to linger in the Shijie Township in the city of Yuxi, according to the headquarters in charge of monitoring their migration. Another elephant that broke away from the herd eight days ago stayed in the Jinning District of Kunming.

The headquarters said they would direct the migration of the elephants with food baits and blocking of roads, adding that it would take advantage of the favorable conditions, such as rainfalls and temperature drops in recent days, to move the elephants back to their proper habitats.

Local authorities on Saturday mobilized 319 personnel, more than 600 vehicles and 18 drones to monitor the herd and prevent human-elephant conflicts. A total of 3,548 people were evacuated on Saturday.

For over a month, authorities have sent police to escort the herd, evacuated roads to facilitate their passage and used food to distract them from entering densely populated areas.

Asian elephants are under A-level state protection in China, where they are mostly found in Yunnan. Thanks to enhanced protection efforts, the wild elephant population in the province has grown to about 300, up from 193 in the 1980s. Enditem

Aerial photo taken on June 13, 2021 shows a herd of wild Asian elephants in Shijie Township of Yimen County, Yuxi City, southwest China’s Yunnan Province. The wandering herd of wild Asian elephants that has caught global attention is lingering in the Shijie Township in the city of Yuxi, southwest China’s Yunnan Province, authorities said Saturday. All the elephants are safe and sound, according to the headquarters in charge of monitoring their migration. (Xinhua)