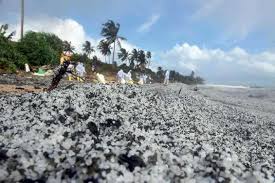 n an effort to save Sri Lanka’s coastline from the MV X-Press Pearl incident, the tri forces together with the Marine Environment Protection Authority of Sri Lanka (MEPA) have collected over 1,000 tonnes of debris from the ongoing beach cleanup initiative.

Accordingly, the debris has been securely stored in 44 containers, including plastic nurdles stored in a hazardous waste facility, MEPA stated in a press release.

The Chairperson of MEPA, Attorney-at-law Dharshani Lahandapura said that on the instructions of State Minister Urban Development, Cost Conservation, Waste Disposal, and Community Cleanliness MP Nalaka Godahewa, a detailed three-stage approach which includes an accelerated clean-up, environmentally responsible disposal and restoration, as well as claims and damages, is being formulated by the relevant government authorities.

Explaining further, she detailed that a team of local and foreign experts and officials had conducted assessments of the heavily impacted areas and considered it for a future course of action.

The Chairperson of MEPA further said her organization is also working closely with the Central Environment Authority (CEA) on the disposal of the nurdles and debris that has been collected thus far.

“The implications from this disaster have been manifold. But at the same time, we need to ensure that the disposal of this waste is completed responsibly in an environmentally friendly manner. We may also collaborate with private companies to dispose of waste ecologically and responsibly” said the Chairman of the CEA, S. Amarasinghe.

Do we need plant diseases, unwanted pests and plagues to add to the country’s woes?