As Plastic Pollution in Rivers Gets Worse, Species Are Increasingly Living on Litter 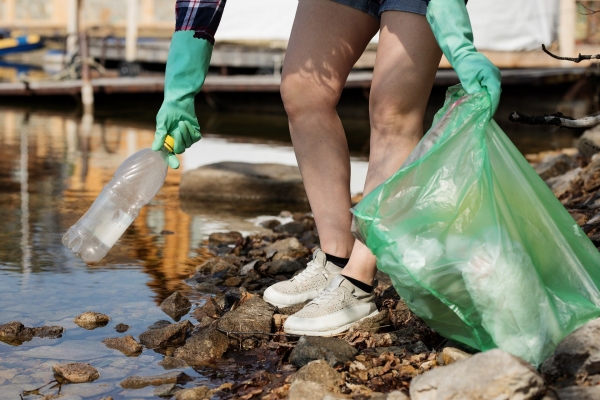 Scientists have long warned that the world’s major rivers and estuaries are hotspots for plastic waste, as trash and microparticles wash down tributaries and congregate before entering oceans. Now, new research has found that as this waste accumulates, aquatic river species like insects and snails are increasingly choosing to settle on plastic rather than natural features like rocks or fallen branches.

The findings, based on research in British rivers, are the latest evidence of how plastic waste is reshaping the world’s riverine ecosystems, both physically and behaviorally.

“Litter is persistent and widespread in rivers worldwide, and so it is likely that invertebrates are living on litter in many other rivers, especially those which have poor habitat quality,” Hazel Wilson, an environmental scientist at the University of Nottingham and lead author of the new research, published in the journal Freshwater Biology, told E&E News. “It shows just how poor the habitat quality of many urban rivers is, given that litter can support more diversity than other available habitats.”

Wilson and her colleagues collected 100 pieces of plastic waste from three rivers in eastern Britain, as well as 50 rocks. In the lab, the scientists analyzed all the macroinvertebrates on the items’ surfaces, totaling nearly 17,000 organisms from 46 taxonomic families. They found that the surfaces of plastic waste items had nearly four times the diversity of macroinvertebrates as the rocks. And the more complex the plastic’s surface was, the higher the diversity, the study found.

The increase in plastic waste coincides with a decline in natural habitat features in urban rivers, as development increases sedimentation, which blankets riverbeds in silt and sand, and restricts the supply and movement of rocks, fallen tree branches, and aquatic plants.

But the scientists warn that even though their findings show litter can serve as a place for species to colonize, the waste is harmful overall. Trash can release toxic chemicals and entangle animals, and microplastics pose major risks to animals and humans if ingested.

Researchers have previously estimated that between 1.15 million and 2.41 million tons of plastic waste enters the ocean every year from rivers around the globe, from the Ganges to the Rhine to the Delaware. The mouth of the Yangtze River in China, for example, has an estimated 4,137 microplastic particles per cubic meter. Much of this waste travels downstream between May and October.

“Natural habitats have become rare in urban rivers,” Wilson said. “This shows how even small increases in the complexity of habitats available to invertebrates can improve whole river biodiversity. We just need to increase habitat quality in rivers in a way that is not otherwise detrimental to the river.”

Coal and COVID-19: How the pandemic is accelerating the end of fossil power generation