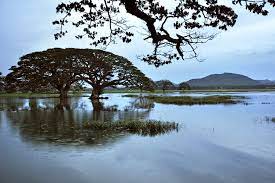 July 11, Colombo: ColomboPage News Desk The Department of Archeology has decided to grant permission for the resumption of excavation work on the Tissamaharama tank, which has sparked a heated debate.

A Sino-Sri Lankan joint venture has launched a project to remove sand and silt from the Tissamaharama tank. . The Department of Archeology took action to suspend the project for not obtaining permission from the Department.

Tit has been alleged that the Irrigation Department and the Ministry of Irrigation have illegally assigned a Chinese company to excavate soil and silt and sand in the tank using machinery without the permission from the Department of Archeology.

However, Director General of Archeology Senior Professor Anura Manatunga told Neth News that written permission would be granted in a few days to carry out the excavations under the supervision of archaeologists.

The Archaeology Department requested the Irrigation Department to halt the project until permission is obtained for excavation of the Tank and the work has been suspended from the 25th of June.

The Director General of Archeology stated that no damage will be caused to the lake and surrounding areas due to the sand and silt removal project in the Tissamaharama tank.

Questions have been raised about the presence of uniformed Chinese individuals at the project as the camouflaged uniforms worn by the workers of the Chinese company digging the tank were very much similar to those worn by soldiers in China’s People’s Liberation Army,