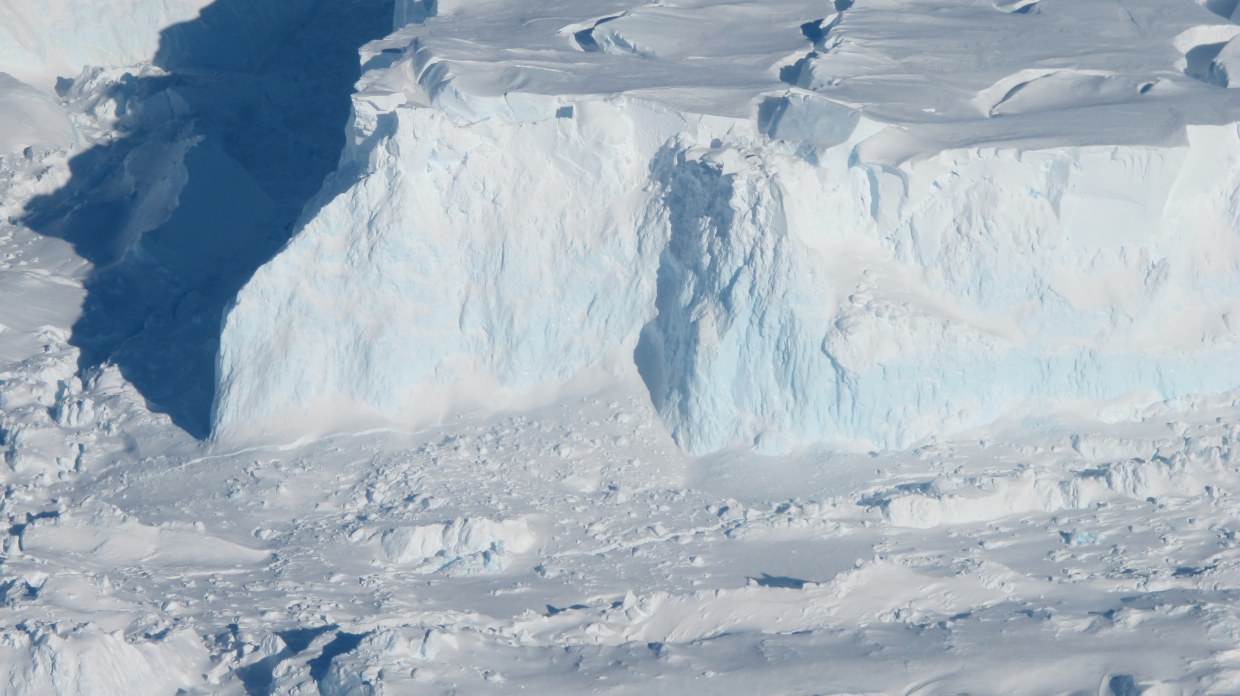 An Antarctic ice shelf could crack and disintegrate within the next decade, allowing a Florida-sized glacier to slide into the ocean and raising sea levels by feet, scientists warned Wednesday.

A dramatic chain reaction in the ice could occur by 2031, starting with the Thwaites Glacier, said Erin Pettit, a professor at Oregon State University who studies glacier and ice sheet dynamics.

The glacier, a river of flowing ice, is blocked from falling into the sea by the eastern ice shelf, which sits atop an underwater mountain and is disintegrating.

New research Pettit presented to a meeting of the American Geophysical Union in New Orleans suggests the final collapse of the ice shelf may occur “within as little as 5 years” and mark the beginning of the end of the Thwaites Glacier.

The ice at the top of the shelf is newly crisscrossed with cracks that are expanding toward the center of the shelf as quickly as 2 kilometers (1.24 miles) a year, the research found.

Scientists pointed to a zigzag path they say is the likely site for the ice shelf to crack and disintegrate.by TaboolaSponsored StoriesDEAKIN UNIVERSITY INTERNATIONALHere is how to write a fantastic university applicationUSA WORK | SEARCH ADSDo You Speak English? Work a USA Job From Home in Sri Lanka

Thwaites is the “widest glacier in the world” and has “doubled its outflow speed within the last 30 years,” said Ted Scambos, a senior research scientist at the Cooperative Institute for Research in Environmental Sciences and a contributor to the research.

“If Thwaites were to collapse, it would drag most of west Antarctica’s ice with it,” Scambos said in a news release. “So it’s critical to get a clearer picture of how the glacier will behave over the next 100 years.”

Thwaites contributes 4 percent of annual global sea level rise, according to the British Antarctic Survey. But if the shelf collapses, that amount could rise to 25 percent, the scientists said.

All the water in the Thwaites Glacier would raise sea levels by 2 feet — but if its collapse triggers nearby glaciers to fall, the global sea level could rise by up to 10 feet, Scambos said.

A series of scientific studies of Thwaites in recent years has shown the enormous glacier is melting more quickly and in ways scientists never expected.

In 2019, scientists discovered a 6-mile-long, 1,000-foot-deep cavity under the glacier that means it lost 14 billion tons of ice, NBC News reported.

Later that year, researchers compared aerial films of Antarctica taken in the 1970s to current radar data, which showed Thwaites was melting much faster than researchers though