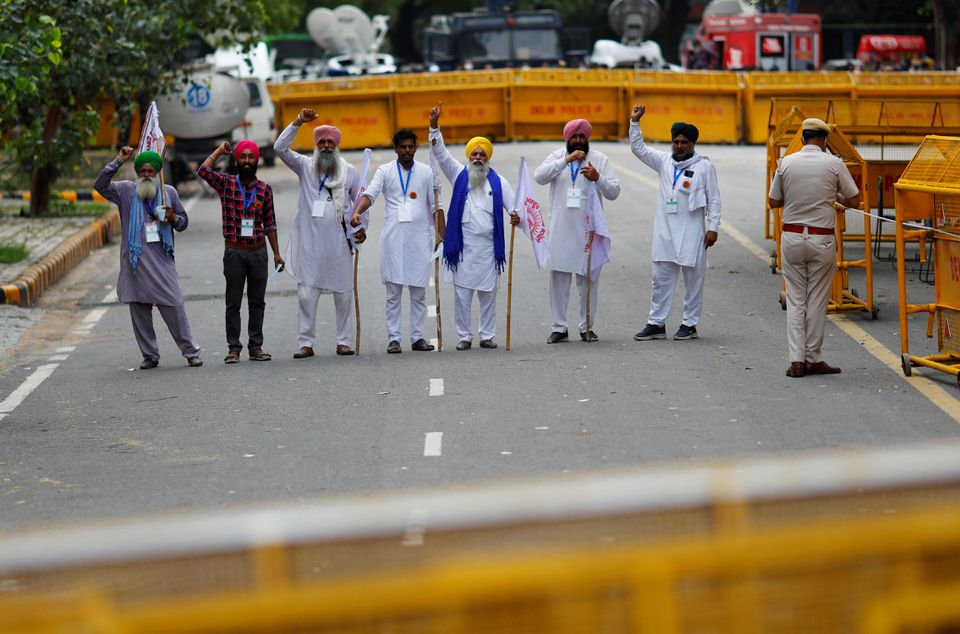 NEW DELHI, July 22 (Reuters) – Indian farmers, protesting against new agriculture laws they say threaten their livelihoods, started a sit-in on Thursday near parliament in the capital, renewing a push for repeal of the laws.

In the longest-running growers’ protest against Prime Minister Narendra Modi’s government, tens of thousands of farmers have camped out on major highways leading to New Delhi for more than seven months.

On Thursday, police in New Delhi escorted 200 farmers from protest spots on the outskirts to Jantar Mantar, a large Mughal-era observatory in a central area that doubles as a protest site.

“We are here to remind the government again that the anti-farmer laws need to be rolled back to protect Indian agriculture and millions of poor farmers from a complete takeover by large corporations,” Rakesh Tikait, a leader of the Bharatiya Kisan Union, one of the largest grouping of farmers, told Reuters.

Farmers complained that before being allowed to gather at the central site, their identity cards were checked by police, who have tightened security, erecting barricades and check posts to deter violence.

The protest follows a clash with police by thousands of angry farmers late in January after they drove tractors into security barriers. One protester was killed and more than 80 police injured citywide. read more

“Throughout the monsoon session of parliament, 200 farmers will go to Jantar Mantar every day to hold a farmers’ parliament to remind the government of our long-pending demand,” said Balbir Singh Rajewal, another leader of the farmers.

Parliament ends its monsoon session early in August, and the farmers have been allowed to gather until Aug. 9.

In parliament, key opposition leaders, such as Rahul Gandhi and Harsimrat Kaur Badal, asked the government to tackle the farmers’ concerns and roll back the three controversial laws.

Many senior members of Gandhi’s Congress party, which is the main opposition group, gathered in the compound of parliament, carrying placards that read “Save the country, Save the farmers,” and shouting slogans of support.

The farm laws introduced in September 2020 will help boost growers’ incomes, and the government was willing to talk to the farmers, Agriculture Minister Narendra Singh Tomar told reporters in parliament.

Committee to report on ships dumping oil around country