86-Million-Year-Old Fossil of Pterosaur Dubbed “Dragon of Death” Unearthed in Argentina, Classified as One of the Largest Flying Reptiles (Photo : AFP via Getty Images) This photo taken on November 30, 2017 shows a fossilised pterosaur mandible displayed at a museum in Hami, in northwestern China’s Xinjiang Region.

Paleontologists have unearthed fossils of a new species of pterosaur dubbed “The Dragon of Death” in Argentina. The discovery gives fresh insights into the massive predator. The ancient flying reptile is dated back to 86 million years ago when dinosaurs roamed Earth.

The new species of pterosaur is estimated to be about 30 feet (9 meters) long, Reuters reported. Researchers said that the species predated birds and were one of the first animals on Earth to use flight in hunting their prey. 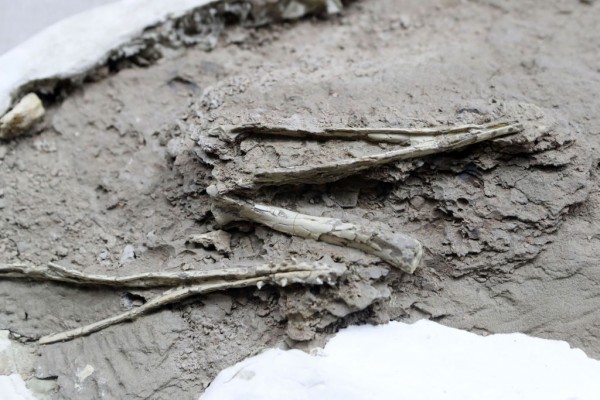 (Photo : AFP via Getty Images)
This photo taken on November 30, 2017 shows a fossilised pterosaur mandible displayed at a museum in Hami, in northwestern China’s Xinjiang Region.

The Dragon of Death

The team found the fossils in the Andes mountains in the western Mendoza province of Argentina. Analysis of the rock where the fossils were from the Cretaceous Period millions of years ago.

That means the ancient flying reptile was already alive more than 20 million years before the massive asteroid hit Earth that wiped out about three-quarters of life on the planet 66 million years ago.

Leonardo Ortiz, the project leader of the team, said that the fossils have unique characteristics that have never been seen before, which requires a new genus and species name. They named the new species Thanatosdrakon amar, a combination of Greek words for death (Thanatos) and dragon (drakon).

When translated, the name means “The Dragon of Death,” which Ortiz and his team feel strongly appropriate given the unique features of the fossils. They noted that it would likely have been a frightening sight if it were still alive today.

The team also classified it as the largest pterosaur yet discovered in South America and one of the largest ever found in the world. Ortiz added that they had not found a current record or any close relative of the new species. They published their findings in a study in the journal Cretaceous Research.

Pterosaurs: The Coolest Thing Ever in the Air

Paleontologist Kevin Padian from the University of California, Berkeley, has been studying pterosaurs for many years. He told National Geographic that pterosaurs are the first vertebrates to fly and did it long before the birds and bats, making them the coolest ever in the sky.

They are cousins to dinosaurs who ruled the land and were one of evolution’s greatest successes.

Scientists estimate it to first appear during the Triassic period, about 215 million years before the extinction event at the end of the Cretaceous period.

Since they had no rivals in the sky, pterosaurs ruled and colonized all continents, which helped them evolve a vast array of shapes and sizes. The smallest ever found was measured as no bigger than a sparrow, while the largest was a 40-feet (12-meter) long pterosaur was wider than an F-16 fighter jet.

Paleontologists would put pterosaurs in the same league as birds because of their ability to fly. On the other hand, they are cold-blooded reptiles, making them awkward aerialists.